Find Out How To Spot A Liar, It's Easier Than You Think!

Nobody likes to be lied to. Unfortunately, people lie more often that we think. The, so-called, white lies as well as more serious acts of dishonesty are common in many kinds of social situations. Some of them can be very destructive and lead to serious consequences. Anyone can turn out to be a liar, a newly met acquaintance, your good friend, your partner or a family member. There are different motives for hiding the truth, some less innocent than others. Humans learn to lie at the tender age of four. It is therefore important to know how to spot a liar. Fortunately, it's easier than you think. All you need is to know what to look for. The signs of lying are not hard to spot.

The eye contact
Is someone looking around while talking to you? Avoiding eye contact? It could be a sign of lying. Try to look them in the eyes and see if they get nervous.
The facial expressions
A liar making things up is likely to limit their facial expressions to the mouth. This can sometimes be accompanied by blushing or getting pale if one feels guilty. Watch out for fake smiles.
The body language
Liar's body is usually be quite stiff. Hands are likely to be touching the face. Scratching of the nose, chin and ears while talking are signs you should look out for.
The timing
Is the reaction time slow? The person in front of you may be dishonest. If someone receives a gift, says "thank you, it's lovely" and smiles after making that statement, they may be deceiving you. An honest reaction is spontaneous, not planned.
The voice
Be suspicious if you notice changes in the tone of the voice. Listen and pay attention to details. Inconsistence and shakiness are both signs of dishonesty.
The conversation
Is the story believable? Are there missing facts? Does what the person say seem scripted? What you hear may not be true. Some liars prepare in advance to feel more confident. Ask them a question and see if they get confused. And always look for missing facts.
A sudden change of subject
Making contradicting statements and changing the subject are common signs of deception. A guilty person may try to use humor or sarcasm to confuse you. Stay focused and alert.
Be intuitive and always trust your instincts. Look out for anything out of the ordinary. If something feels wrong, it probably is. Don't let anyone deceive you!
People are dishonest for different reasons. To avoid conflicts, for personal gain, to boost confidence. Some people lie to make themselves or others feel better. Others find it hard to be assertive and end up making things up. Lying on a regular basis is risky, destructive and may lead to problems in the future. Healthy relationships are always based on mutual honesty and proper communication. It is best to avoid people who constantly lie. 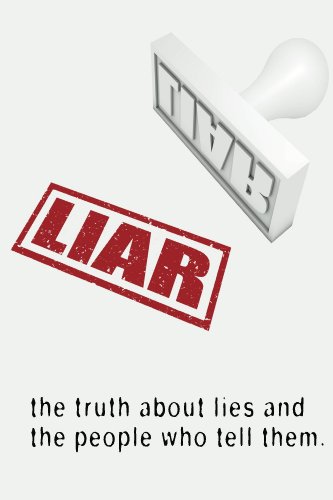 Liar: The Truth About Lies and the People Who Tell Them Amazon Price: Buy Now(price as of Jun 19, 2016)
Next >> Home Coffee Roaster - Fresh Roast SR500 - Awesome Gift for the Coffee Lover