Forget the romance and adventure.  Forget damsels in distress and Christians suffering in the maw of the Muslim hordes.  The Knights Templar, whose origins and exploits are often clouded in mystery and myth, engaged in some very real, human pursuits.  An interesting connection to modern capitalism is the Templars’ virtual invention of banking.

The Knights Templar grew from a humble group of Christian knights in the service of the Roman Catholic Church.  Officially endorsed by the Church in 1129 as its mercenary arm

abroad, the Knights Templar originated with a considered noble cause.  The mercenary actions of Europe to free the Holy Land from its Muslim conquerors expressed itself in the several Holy Crusades to return the Holy Land to Christendom; the Templars waged war with the Infidel (as perceived at the time).  Another function of the Knights Templar was to give protection and to escort the many European pilgrims traveling to the Levant.

Travel in the middle ages was a very dangerous activity.  Barring the routine hazards that could befall the ordinary pilgrim (inclement weather, wild animals, disease, and natural disasters), a more insidious problem was highwaymen.  Most pilgrims traveled with all their worldly possessions – granted, these may be few, but there were some things of value.  Metal ware, jewelry, currency, and of course precious metals enticed the more adventurous robbers to hide out and ambush pilgrim caravans.  More often than not the travelers were murdered for their possessions and left to rot where they fell.

As the Templars couldn’t obviously provide escorts for every traveler they developed a credit/scrip system to allow a pilgrim to travel with his “worldly goods” and not worry about being robbed of his life's savings.  The traveler could bring his gold, silver, jewelry, or other valuables to a Templar for asset management.  The Templars would assign a value to the deposited goods.  The pilgrim (most usually a nobleman; commoners did not have much wealth worth protecting) was then presented with a letter of credit.  This letter, once the traveler arrived in the Holy Land, could be taken to the local Templar preceptory and redeemed for the value assessed at the point of origin.

This is akin to the use of personal checks as we know them today.  The system was ingenious.  The Templars received commissions for the asset management activity.  This thwarted the  highway robbers (since the letter of credit was only valid for the bearer and of no intrinsic value), and a traveller's capital remained secured in repositories.

The Templars became wealthy through this system and through noble patronage.  It was their wealth that caused their downfall in the early 14th century.  The French King Philip, indebted to the Templars for much money, denounced them as heretical to Pope Clement V to avoid paying his debts.  The Papacy ordered the Templars disbanded, and they were routed and most were killed, with their wealth being absorbed by their persecutors.   But, one should take a moment and think about a Templar when one writes a personal check! 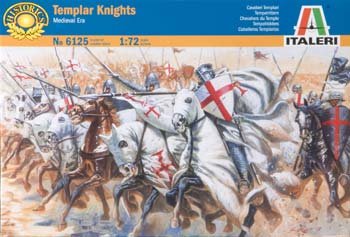