Five Things to do in Virginia

Travel to the Old Dominion

Brown's Island is a man-made island located in Richmond Virginia near the area referred to as the Falls.  The Falls is a rocky area near the city which prevented large Colonial Era warships from sailing any further along the James River.  The land that Brown's Island is today was originally owned by Elijah Brown who purchased the land in the early 1800s.[1] This island would go through many transitions until it finally became what it is today, an outdoor festival area.

Following Brown's purchase, the island was transformed by the Confederate Military into a labratory to create arms for the war effort.  The Island was utilized following the Civil War by various industrial groups until it was finally turned into a park and a place for families to relax.  Today the island hosts many events such as blue grass festivals, holiday celebrations and annnnual summer gatherings.

The picture above shows the industrial era bridge that connected the otherside of the James River to locations near Brown's Island.  This bridge still exists within the vacinity of the Island an is an excellent location for families who wish to take in the sights of a bygone era on a sunny summer day.

If the thought of exploring Brown's Island entices you then you should check out another popular tourist destination in the Old Dominion State.  The Natural Bridge is a natural structure located in the Blue Ridge Mountains.  The Natural Bridge is a wonderful location to take a family on an afternoon picnic.  If you go during the Fall you will get the added benefit of seeing the annual changing of the leaves along the Blue Ridge Mountains.

The Natural Bridge is a natural structure that was once owned by President Jefferson.  It is near the Maury River.  While at the Maury River you should check out White Water rafting tours offered in the vacinity of the Natural Bridge.[2]  If you have a kayak or are already adept at rafting then you can go about rafting alone, but many will want to explore getting an expert rafter or guide to show them the way as the James and Muary Rivers have many rapids and can be dangerous to newcomers.

Finally while you are visiting the Natural Bridge and its all natural structures you should consider visiting a man-made structure.  This location is known as Foamhenge.  Foamhenge is a location near the Natural Bridge in which foam replicas of Dinosaurs have been created.  Many of these dinosaurs were native to the region many millions of years ago when they walked upon this Earth.

Thomas Jefferson, the man who owned the Natural Bridge, and third President of the United States of America has a house located near the University of Virginia.  His house is open to the public and you can take a tour of his residence.  There are both local house tours which run about 45 minutes and garden tours which allow you to explore with or without a guide.  These tours will let you visit the hallowed grounds of one of America's most famous Presidents and a favorite son of Virginia.

While you are visiting Monticello you may want to consider spending the night because there are many additional sights to see in Charlottesville Virginia.  In the city you can go to the historic outdoor mall which stretches for around five blocks up and down Main Street.  There are numerous clothing outlit stores, bars, antique shops, and rare bookstores.  It is a great mall and the best mall in Charlottesville.  Also while you are visiting the city, you may want to consider touring the campus of the University of Virginia.

If you go during the fall semester you may even be able to catch a college football game!

After touring the hinterlands you may want to consider going to back to sea-level.  A great place to start your trip of the Tidewater is Newport News Virginia.  This part of the state is home to many institutions that you are most likely aware of.  Newport News is a location where the U.S. Navy commissions some of it's greatest warships, along with Norfolk this area is home to many sailors, and military personal.  You might want to consider taking a tour of the shipyards while visiting this area of the state.

After you have toured the shipyards you will want to go to one of the best maritime museums on the East Coast, the Mariner's Museum in midtown Newport News.

The Museum is home to many exhibits and contains a great collection of local, state, national, and even international history.  Most of it revolves around maritime history.  There are exhibits that cover the International Slave Trade, Ancient Ships, Native Americans, the Civil War, and Modern Ships.  These are some of the great exhibits at the musuem, but the prized exhibit within the museum is the replica of the Monitor.  During the Civil War, the Union commissioned an ironclad warship to fight the Confederate ironclad.  The Battle became known as the Battle of Hampton Roads and there is a exciting video re-enactment of the engagement between two ironclads at the musuem.  You can tour the Monitor and actually see the pieces of the original Monitor which are housed in the Museum itself.  It is quite a sight to see and it is amazing to be this close to American history.

End of the Line: The Beach

After touring Newport News, the shipyards, and the museum you will want to complete your travel of the Old Dominion at Virginia Beach.  Virginia Beach is a great location for families to enjoy their summer vacation.  The beach is home to one of the biggest cities in Virginia and it is located right on the sandy shores of the Atlantic Ocean.  Here you can tour the Boardwalk and take in the sights of the beach, the carnival atmosphere from outdoor arcades and ferriswheels.

Virginia Beach is a huge expansive piece of territory that runs up and down the coast.  Don't worry there is plenty of space for your family to set up a tent and bask in the sun.  If you enjoyed the beach you may want to consider traveling to the nearby Chesapeake Bay and do some salt water fishing or going to the Dismal Swamp and see if you can spot an alligator in the musky marshes.

Virginia is a great state to explore.  It has a treasure trove of history that dwarfs many states in the United States, that's why they say that Virginia is for History Lovers.  There are countless more locations that could be added to this list, but for now you will have to suffice with the abundance of material that I have provided.  I hope you enjoy your travel in Virginia and please enjoy your stay. 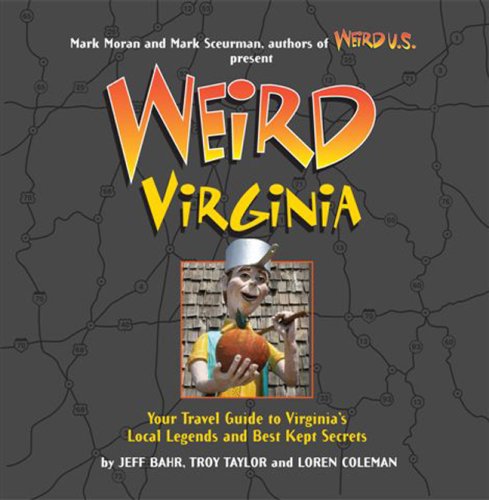 Weird Virginia: Your Travel Guide to Virginia's Local Legends and Best Kept Secrets Amazon Price: $19.95 $4.99 Buy Now(price as of May 2, 2015)
Next >> A Punishing Hike to Mt. Ypsilon in Rocky Mountain National Park