My name is Rose and I am a Canadian freelance writer. I love to tackle human rights issues and anything related to the betterment of society and our planet.  For a sorted directory of my articles: RoseWrites.netboard.me Love to write too? Join me on here on InfoBarrel.
InfoBarrel is a writing platform for non-fiction, reference-based, informative content. Opinions expressed by InfoBarrel writers are their own.
InfoBarrel > Lifestyle > Holidays & Celebrations

Dress up for fun and try some baked pancakes

And why New Orleans is the go-to place for it

The word Mardi Gras means "Fat Tuesday" in French.[2] It signifies the last day one can eat rich, fatty foods prior to Ash Wednesday,[3] when fasting during Lent[4] begins. It was celebrated in Paris (before America) during the Middle Ages.[5]

According to Arthur Hardy,[6] an expert on Mardi Gras, in 1699 a group of French explorers, led by Pierre Le Moyne d'Iberville,[7] christened a site on the west bank of the Mississippi river (about 60 miles south of New Orleans). Since it happened to be March 3rd (a day celebrated in France) it was named "Point du Mardi Gras."

The arrival of Rex, the monarch of Mardi Gras

Each year, on the Monday before Mardi Gras, a King (called "Rex") is publicly announced. This idea was formed in 1872 by New Orleans businessmen to "bring tourism and promote business" in the area following the American civil war.[16] A Queen is also chosen. Traditionally, Rex arrives by boat on the Mississippi river.

Shown above is a New Orleans postcard from around 1910 which states, "Arrival of Rex, Mardi Gras."

Some feel it began earlier, in Rome

Other sources (including Hardy) make mention that it could have begun even earlier, in Rome. Known as Lupercalia, it was celebrated February 13th - 15th as a ritual of cleansing, health, and fertility.[8] Some authors believe that Pope Gelasius I (who died November 19th, 496)[9] renamed Lupercalia with the "Feast of the Purification of the Blessed Virgin Mary."[8]

Why are purple, gold, and green so prominent?

You might wonder about the colors that are most commonly worn during Mardi Gras. They are purple, gold, and green (used on the Mardi Gras flag) which have Catholic origins.[2]

The common thread I found was that purple represents justice, gold represents power, and green represents faith. Beads, costumes, and masks of these colors are commonly worn during festivities.

To sum it all up: it's a celebration involving colorful costumes, fun, and decadent foods. I always knew it as Pancake Tuesday.[10] In some workplaces and schools, cafeterias serve pancakes with our incredible Canadian maple syrup.

You will find costumes of all kinds on Amazon

But what struck me as irresistible was this one: 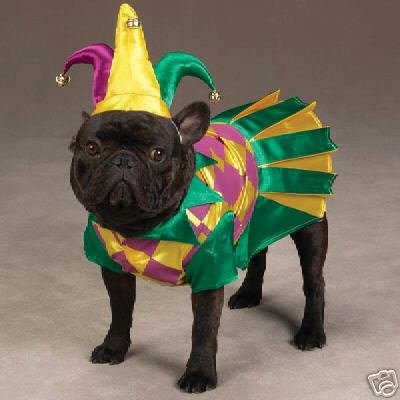 Zack & Zoey Mrs. Court Jester Joker Female Dog Mardi Gras Halloween Costume with Hat SmallAmazon Price: $99.99 Buy Now(price as of Feb 26, 2014)
If you have a small doggie that loves to dress up, this is the costume for him or her. Celebrate Mardi Gras in style with this two-piece outfit. It's made of polyester with easy-to-use velcro closures. The jester hat has elasticized chin and ear straps for comfort. I especially love the 3 gold bells on the hat. For best fit, your doggie should have a 14" - 18" chest and a 10" - 12" neck.

Once you and your doggie are all decked out...

You're ready to bake some delicious golden pancakes:

Gluten-free baked pancakes from the oven?

Sure, they are similar to dutch baby pancakes.

Since I bake gluten-free these days, I thought I'd offer up my semi-world famous gluten-free baked pancakes. I adapted this recipe from "cinders" at allrecipes.com.[11] The changes I made include: using gluten-free flour with xanthan gum, a bit of baking powder, and slightly more sugar. (I omit the icing sugar and lemon juice). It would be a shame to miss out on Canadian maple syrup.
The great thing about this recipe is there's no flipping, no continuous pouring of batter, and you can feed your whole family all at once. The most critical step is to not burn the butter. Most recipes suggest putting the pie plates in the oven with the butter. I don't. I adopt the method used in this next short (1:13 second) video. My recipe follows this video.

Make sure you have decent oven mitts

and a large trivet (or similar) to put the pie pans on:

1. Adjust your oven racks (if need be) so that pans will be centered. Grab two 9-inch pie pans and place them in the oven. Preheat oven to 420 F (215 C). (Ensure you have oven mitts and a safe surface ready for the hot pans to be placed upon).

2. In a medium bowl, beat 4 eggs and set aside. In a large bowl, whisk together: gluten-free flour, xanthan gum (omit if using regular flour), sugar, salt, and baking powder.

3. Add milk to the eggs, combine well, and mix into the dry ingredients until almost smooth (it's okay to have a few lumps). TIP: It's helpful to pour the batter from a spouted bowl or measuring cup.

4. Have two portions (3 tbsp. each) of butter set aside on a plate near your oven area. Carefully, remove the hot pie pans and swirl 3 tbsp. of butter around in each one until melted. (See video previously). Then pour 1/2 the batter into each pie pan and pop them back in the oven.

5. Bake until pancakes are golden brown (they often puff up in the center and around the edges). A toothpick in the center should come out clean (about 30 minutes). Now you have time to set the table, get the syrup out, and the coffee started.

Everyone gets to eat pancakes at the same time

Just remember to pass the maple syrup around.

In Canada, Jakeman's is highly recommended 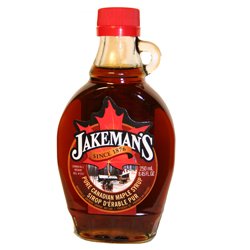 Jakeman's 100% Pure Maple Syrup in Kent Glass Bottle, 500mlAmazon Price: $17.00 Buy Now(price as of Feb 26, 2014)
You can buy the same quantity in a recyclable lithographed plastic bottle (for the same price). I find syrups taste better kept in glass, though. The National Post hosted a blind taste test and Jakeman's syrup was found to be the "Best Tasting" maple syrup in Canada (out of 8 national brands). This is decadent, pure, organic heaven in a bottle.
Next >> How to Recycle Christmas Cards - 5 Fast Ways to Get Creative Even if you are NOT