I am a retired teacher of English as a second language. I teach on line via Skype, and write on-line articles which reflect my love of travel, language, literature, history and culture. I love writing for InfoBarrel. Why not join me by signing up here: http://www.infobarrel.com/signup.php
InfoBarrel is a writing platform for non-fiction, reference-based, informative content. Opinions expressed by InfoBarrel writers are their own.
InfoBarrel > Lifestyle > Pets & Animals > Birds

Probably everyone living in North America is familiar with the American robin, a well-loved bird which is found across the continent. The robin is in fact so popular that three U.S. states, Connecticut, Michigan and Wisconsin, have chosen it as their state bird.1

Because it is such a common sight, most people take the robin for granted and think they know all about it. But here are some things that might surprise you.

Many North Americans are unaware that these familiar birds are not actually robins at all. The true robin is Erithacus rubecula, a small red-breasted European songbird which is a member of the flycatcher family7.  While North American Christmas cards often feature red cardinals, British cards may have pictures of this little red-breasted songster. As an expatriate Brit, yours truly uses holiday greeting cards from the old country as a great way to annoy my Canadian friends with images of "real" robins like the one in the picture below.

The much larger American robin, Turdus migratorius, pictured below, is actually a large orange-breasted thrush.1 It was named after the European bird by immigrants who were reminded of the other familiar redbreast at home.

2. Not (Necessarily) a Herald of Spring

It is generally believed that robins migrate south for the winter and that sighting one early in the year is a sign that spring is on the way.

However, this is not necessarily so. The robin is a very hardy bird. It tolerates cold well and does not generally need to escape to the tropics. Some northern robins migrate just far enough south to find a reliable food supply while those who live further south generally stay around their home territory. So even though you may not see robins in your garden during the winter this does not necessarily mean they have migrated south. They may still be around somewhere, perhaps hiding in the woods8. 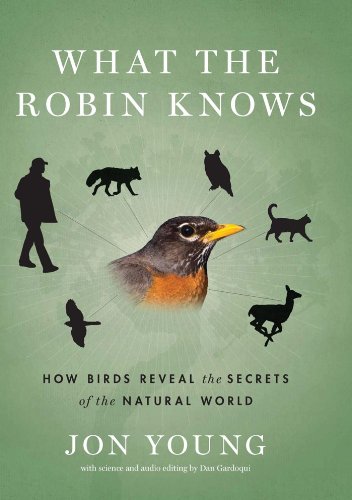 What the Robin Knows: How Birds Reveal the Secrets of the Natural World Amazon Price: Buy Now(price as of Jul 28, 2016)

Because we generally see robins on the grass eating worms, it is easy to assume that these are the mainstay of their diet. However, although Robins eat a lot of worms, perhaps as many as 14 feet of worms per robin per day,3  robins are omnivores that eat a lot more than worms.

In the summer they eat grubs, caterpillars, cutworms, small snakes, various insects, and even mollusks and small fish.10 At other times of the year they primarily dine on fruit.

Berries such as honeysuckle and mountain ash can develop a high alcohol content in the fall because they ferment in frosty weather. Robins sometimes gorge themselves on this boozy bounty and may become disoriented and cannonade into the windows of nearby houses, or become too drunk to fly.9

4. Wherever Robin Builds Her Nest is Home

The nest is built by the female bird using any available fibrous material such as grass, twigs, feathers or moss pasted together with mud and then lined with dry grass12.

While most robins build nests in trees or shrubs, some have been observed building in some quite unusual places. One blogger on the website Wild Bird Watching reported having a robin building a nest in a patio umbrella. People replying to this post also reported nests on the top of doorways, above light fixtures, in a wound up garden hose, on a stepladder, and even on a truck axle11.

The most famous robins in history were the Peace Bridge Robins, who in the 1930s tried to nest on the bridge connecting Buffalo, New York to Fort Erie, Ontario. The ledge they chose was too narrow for a nest. After watching the birds' futile nest-building attempts for fifteen days, Canadian customs officials took pity on the pair and widened the ledge. The robins then succeeded in building their nest, and continued to nest in the same spot for several years afterwards2.

The eggs of the American Robin are an intense clear blue with no markings. This sky-blue coloration, adopted as an official crayon color named "robin's egg blue" by Crayola© in 199313, is created by a pigment known as biliverdin14.

But why is the robin's egg so blue?

Well, you will probably not be surprised to learn that science has carried out an experiment in order to find an answer to that very question.

To test this theory, researchers at Queen's University in Toronto, Canada devised a devious experiment to study the effect of egg coloration on paternal behavior. They obtained artificial eggs in various shades of blue. They then replaced the real eggs in the nests of different robins with different shades of artificial eggs. Next they estimated when the original eggs would have been due to hatch, replaced the artificial eggs with baby robins, and observed the behavior of the adoptive parents.

There are many native American legends about the robin. The Blackfoot tribe believed that the robin was a symbol of peace. There are both Miqmac and California myths that explain how the robin’s breast was burned red when he brought fire to people. The Northwest coast Tlingit people said the robin was created to please people with its song4.

And entertain us with song it certainly does. While both males and females are heard calling and raising the alarm, the male is a champion songster.5 Male robins sing from early spring until fall. They are also one of the first birds to begin singing in the morning, generally about an hour before sunrise, and continue singing until well past sunset. In addition, because they can produce sounds both breathing in and out, they can sing for long uninterrupted stretches of time. It has actually been calculated that a robin singing 1300 songs an hour, 10 hours a day could produce over a million songs during a 120 day breeding season15.

The robin's song is not only frequent, it is also highly complex.  Although it may seem like simple warbling, each male robin has a complex repertoire of up to 20 caroling phrases, and up to 100 high pitched hisselly sounds which have been described as whispered notes.  Robins also produce a variety of  whinnies which may be used as warnings of danger but which often form part of the robin's song. This wide variety of possible combination of caroling, hisselly sounds and whinnies means that the robin's song shows a great deal of variety, and may of change often depending on the situation and the time of day5. These vocal virtuosos have also been heard mimicking the calls of other birds6.

So now that you have read this article you should also have a better appreciation of  that common red breasted songster you frequently see pulling juicy worms out of the spring grass.