I am a retired teacher of English as a second language. I teach on line via Skype, and write on-line articles which reflect my love of travel, language, literature, history and culture. I love writing for InfoBarrel. Why not join me by signing up here: http://www.infobarrel.com/signup.php
InfoBarrel is a writing platform for non-fiction, reference-based, informative content. Opinions expressed by InfoBarrel writers are their own.
InfoBarrel > Entertainment > People

George Clooney has the unique honor of having been voted the sexiest man alive by People magazine twice, in 1997 and 20061.

Performing runs in George's family. His mother Nina Bruce was a beauty queen, his father Nick Clooney was a TV newscaster and talk show host, and Rosemary Clooney was his aunt5. His childhood ambition was to be a professional baseball player. When he was older, he tried out for a position on the Cincinnati Reds baseball team, but  the team did not pick him up.2 When he was a young actor, George was so broke that he lived in a friend's closet in Los Angeles for almost two years and rode to work on a bike3.

George Clooney is the sixth actor to play Batman[6]. He also boasts a list of failures and rejected roles. He abandoned his role as a scruffy foreman on Roseanne when it was the top show in the U.S. and quit the 1991 comedy Baby Talk after he had a fight with the executive producer. He was fired at the end of the first season of the sitcom The Facts of Life, rehired because he was on contract, and then fired at the start of the second season.

George refused to audition for the movie Guarding Tess because he found the small size of the role insulting5. Other roles he has rejected include the starring role in Jack Frost, which went to Michael Keaton, and two roles which were picked up by Kevin Kline: Artemus Gordon in Wild Wild West and Guy Noir in A Prairie Home Companion.

Clooney had failed auditions for the roles of Mr. Blonde/Vic Vega in Reservoir Dogs and that of Reed Richards in Fantastic Four. He was also was beaten out by Brad Pitt for the role of J.D. in Thelma & Louise. Although he won an Oscar for producing Argo he was originally going to play the starring role but gave it to Ben Affleck because of scheduling conflicts. He was also replaced by Guy Ritchie when he was forced to drop out of the 2015 remake of The Man from Uncle because of back problems7.

For eighteen years, George had a 300 pound Vietnamese potbellied pig named Max, and he was heard to describe his attachment to Max as his "longest relationship to date".  George and Max were inseparable. They were often seen together on set and they even flew together on John Travolta's private jet. George's porky pet is also rumoured to have been the cause of his break-up with at least two women8.

Clooney was an early supporter of the TV show South Park, and was rewarded for his loyalty when he was asked to use his barking skills in the role of Sparky, the gay dog, He subsequently played an actual speaking role as Dr. Doctor in the movie South Park: Bigger, Longer and Uncut9.

George has survived several debilitating illnesses. In middle school, he contracted Bell's Palsy and was nicknamed "Frankenstein" by his schoolmates because of the facial paralysis caused by the disease.   His spine was severely injurned in 2005 during the filming of Syriana, and he had to undergo two surgical procedures as a consequence. The pain was supposedly so severe that he contemplated suicide 10. He subsequently fought and recovered from malaria which he contracted while on a humaniarian mission in the Sudan.11

The heartthrob actor loves to ride motor bikes, but this is a passion which has proved hazardous to his health. He has had two brushes with death when his bike was hit by a car, once in New Jersey in 2007, and again while riding to a film set in Sardinia in 201814.

This video shows the severity of the second accident.

Like most major Hollywood stars, George Clooney enjoys an affluent lifestyle.  He owns a six-bedroom villa in Studio City, Los Angeles as well as a palatial 25-room 18th century Italian villa.  Overlooking Lake Como, this mansion boasts a wine cellar and a garage containing a collection of Piaggio motorbikes. Because the Lake Como villa attracted so much attention from the media and his fans, Cooney purchased a more secluded second villa in nearby Laglio. The mayor of Laglio has put a legal order in place so that trespassers coming within 300 feet of the property will face a 500 Euro fine. 12

Clooney is generous with his wealth. He supports 36 charities primarily focusing on human rights and poverty, both in the United States and around the world.  These include the American Foundation for AIDS Research, Oxfam, UNICEF, the United Way, the World Food Program, and Realizing the Dream which seeks to continue the work of Dr. Martin Luther King. He has raised funds for victims of the 2004 Tsunami, 9/11, and the Haiti earthquake, and is a United Nations Messenger of Peace4.

He has worked ceaselessly to stop genocide in the Darfur region of Sudan. In 2006, he urged the United Nations Security Council to take action, and pleaded with Chinese and Egyptian officials to use their influence stop the violence. He has also testified before the US Senate Committee, and in 2012, he was arrested during a peaceful protest outside the Sudanese embassy in Washington, DC14.

Clooney was married to actress Talia Balsam from 1989 to 19932, and after their divorce he said that he would never marry again, or have children. Nicole Kidman bet him $10,000 that he would be a father before he turned 40. She sent him a check when it turned out she was wrong, and George returned the money, betting double or nothing that he would not have children by age 50, and later doubled down on the bet again. He also had a bet going with Michelle Pfeiffer that he would never get re-married13.

But George has now lost both bets. He married British human rights lawyer Amal Alamuddin in 2014, and the couple had twins Ella and Aexander in 201714.

As befits their luxurious lifestyle, George and Amal have purchased a Grade II listed Georgian mansion in Sonning-on-Thames, England which is located on a 5 acre private island. They have also invested in a luxury  apartment situated next to the United Nations building in New York12.

Unfortunately, the Hollywood gossip mill, which at first  idolized this power couple, heralded 2019 by spreading rumours that their marriage is in trouble15.  Will their relationship survive life in a celebrity fishbowl or will George become single once again? We can only wish them well. 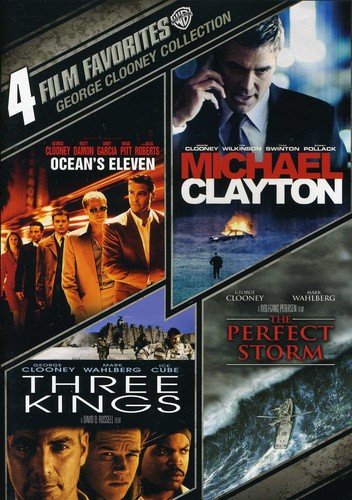