After Thanksgiving was over, my IT guy asked me when I was going to make my beefy pepperpot stew. Until he spoke up, I had completely forgotten about it.

You see, I need to cook gluten-free meals for him but he is definitely a meat-eating beefcake. Oh, but a good IT guy is hard to find.

Guyanese pepperpot is a popular Amerindian-derived meat stew made with beef, pork, mutton, or sometimes chicken that is traditionally served during holidays (such as Christmas). Cinnamon is one of the main spices along with peppers.[1]

Caribbean[2] and Jamaican pepperpot[3] (aka pepper pot) stews have wide regional variations. The common ingredients I found in them seems to be: sweet potatoes, stewing beef, ginger, thyme, and some type of peppers.

I'm not entirely sure what kind of pepperpot stew mine is since I use a combination of all those types - with the addition of bacon.

The Inspiration and My Tweaks

My version was adapted from a recipe[4] I found in Canadian Living magazine. When I checked their cookbook The Slow Cooker Collection, I also found almost the exact same recipe on page 83.

Since my IT guy had a smaller slow cooker, I halved my recipe (which is incredibly easy to do). But for the purposes of those who need to feed 8 to 10, I wrote this gluten-free recipe which makes 3.5 to 4 litres (about 15 cups) worth of stew.

I used gluten-free beef broth (Vogue brand), gluten-free flour with a pinch of xanthan gum, and crushed red chili flakes instead of hot pepper sauce. And it's up to you, but I prefer to use high quality extra virgin olive oil instead of vegetable oil.

Wine vinegar is considered gluten-free (which is used in this recipe). However, distilled vinegar can be problematic in 10% of those with celiac disease. Stay away from malt (barley-sourced) or malt-flavoured vinegar types if you need to avoid gluten.[5]

2 lbs. (907 g) stewing beef cubes
2 sweet potatoes (peeled and cubed)
1 tbsp. extra virgin olive oil
6 slices of bacon (chopped)
2 onions (chopped)
4 - 6 garlic cloves (minced)
6 cups gluten-free beef broth
1/4 cup tomato paste
1 tsp. dried thyme
1 tsp. cinnamon (not in original recipe)
1/2 tsp. each of salt and pepper
1/4 cup gluten-free all purpose flour
pinch of xanthan gum (omit if using regular flour)
1 sweet red bell pepper (chopped)
1 green bell pepper (chopped)
1 tbsp. wine vinegar
1/2 tsp. red chili flakes OR 1 tsp. gluten-free hot pepper sauce
Directions:
Wash, scrub, peel, cube, chop or mince sweet potatoes, onions and garlic first (before handling any raw meat). You can place your sweet potatoes directly into your slow cooker. The onions and garlic can go in a small bowl.
Prepare your gluten-free beef broth (or open can/container) - portion out 1 cup of broth first and have tomato paste, thyme, cinnamon, salt and pepper ready.
Pull out your "raw meat" cutting board, open your bacon package and use a fork to pick out 6 slices. Chop/slice bacon into bite-sized pieces. Open your package of stewing beef and keep nearby stove. Wash your hands if they came in contact with any raw meat/juices.
In a large skillet, over medium-high heat, add oil and brown beef cubes in batches. Don't overcrowd the pan, you want to leave room to turn them. Add them to the slow cooker.
Using the same skillet, turn heat down to medium and add bacon pieces. Fry the bacon until crisp, about 5 minutes (be careful of grease splattering about) and add to slow cooker. Drain excess grease from the skillet, but leave the tasty caramelized beef and bacon stuck on the pan. Add onions and garlic to skillet and stir-fry until soft (a few minutes) then add 1 cup of broth and bring to a boil. (I reset the heat to med-high). Continually stir and scrape up the brown bits from the pan and add everything in skillet to the slow cooker.
Turn off stove and set aside skillet for washing later along with anything that raw meat was on or touched. Wash hands if need be.
Add remaining broth, 1.5 cups water, tomato paste, thyme, cinnamon, salt and pepper to slow cooker and give everything a good stir to combine ingredients well. Cover and cook on low about 7 to 8 hours (or until potatoes and beef are tender). With a ladle, skim off any excess fat on the surface.
In a small bowl, whisk together gluten-free flour, pinch of xanthan gum, and 1/2 cup of water. Wash and dice your green and red bell peppers. Uncover slow cooker, move meat and sweet potatoes to one side and whisk flour mixture into the hot liquid. Once combined, add green and red peppers. Give a good stir, cover and cook on high for about 15 minutes (until thickened).
Lastly, stir in vinegar and red chili flakes. Serve with or over any gluten-free starch and enjoy.

and NSF Listed by ChefLand 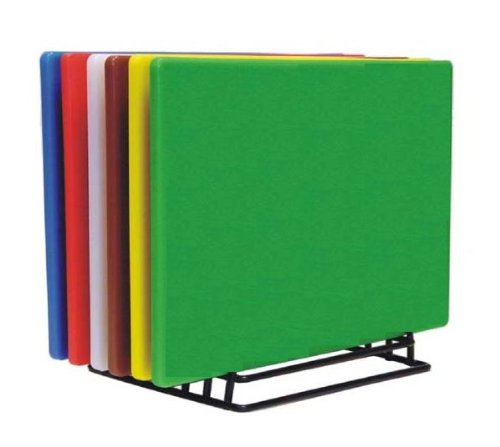 (Set of 6) Colorful Cutting Boards Non-Skid Surface Small 18" x 12" *NSF Listed* Amazon Price: $68.00 Buy Now(price as of Oct 26, 2014)
Every kitchen should have separate cutting boards designated for fruits and vegetables, raw meat, and cooked meat. The easiest way is to use coloured cutting boards. I use red for meat, green for veggies, and brown for cooked meat. I'm allergic to seafood, so my man-servant uses blue just for the fish he prepares (on occasion). I've used those thin mats and I find they dull my knives. I like that these are NSF (National Sanitation Foundation) listed, commercial quality, and just the right size to fit in the dishwasher.

NB: The rack isn't included but you can buy it separately