Games To Play With a Group: Scattergories

Games To Play With a Group: Scattergories

Granted, having people over at your house is a stressful event.   There is often food to coordinate, personalities to keep happy, a house to keep clean, and home rules to enforce.  There are a few things that have made our lives exceedingly more simple in the pursuit of a fun-filled evening.  Yes, board games are one of them, but we have to be specific.  Some games are a flop and not to any fault of the game.  Its just not the right timing.  Scattergories has never failed to show me a good time and because of that I keep coming back for more.

Scattergories seems like one of those games that everybody has heard of but not so many have played.  Like Trivial Pursuit, Outburst, and Monopoly, it seems to have made itself well known, but somewhere along the lines popularity has decreased.  Don't get the wrong idea though, I am not nor would I ever consider it on the same level as those others.  Personally I can't stand them.  For some reason unknown to me, scattergories has faded despite its amazing ability to entertain.

Premise of the game: Game play is pretty simple.  Each player has a list of 12 'cattegories'.  These cattegories consist of things like 'famous people', 'red things', 'things in your wallet/purse', and 'groups or organizations'.  Before looking at the chosen list (typically the list is chosen by someone yelling out a preferred or favorite number) a 20 sided die is rolled that has a letter of the alphabet on each side.  Don't worry, z, q, and the like have been left off.  As soon as the die stops rolling revealing the chosen letter, the time starts and everyone looks at their lists.  The goal is to get something unique in each category that starts with the letter shown on the dice.  Of course qualifiers do not count.  For example: if the letter is M and the topic is 'famous people' then I could write Michael Jordan.  If the letter were J I could write Jordan, Michael as well.  However, no matter how famous your Aunt is, you cannot write 'my aunt' because 'my' is a qualifier.  Each player is awarded a point for each successful word I write down in each cattegory.

Scattergories comes in a big box but don't let that be daunting.  Scattergories is simple.  All you need is a piece of paper and pencil for each person, a set of lists for each person (about 2 in x 6 in) and a timer.  One thing that will move a game to the top of my rankings is its portability and I give scattergories a solid 4 stars.  I am currently working on a travel version.

Number of Players: The box says 2-6 but I have played with 12 easy.  Sometimes we prefer to play in teams even if there are plenty of list sets for everyone.  Get creative.  It's fun.

Estimated play time: This is one of the best things about scattergories!  Typically a game consists of 3 rounds taken from whatever 3 lists you choose.  But a single round only takes minutes!  You can play this game and crown a winner in under 3 minutes!  How cool is that?

Twists: The game has a few twists that you must be aware of if you are going to be successful.  Bonus points are given if your answer contains two words starting with the same letter.  To use the earlier example:  If the category were 'famous people' and the letter M, I could write 'Marilyn Monroe' and get 2 points for that answer.  I don't believe there is a cap on word sequence length, but remember, qualifiers are still a no.  Naturally there are some answers that are easy and come to your head immediately.  Well, to help you think and expand that mind of yours, there is another rule: If two players have the same answer then neither of you get the point.  So be unique, creative, and fast in your decision making.

Like I said, this is one of my favorite games for any occasion.  Best with a group, and so easy to take wherever you are going.  Make sure to make it a part of your next get together.

Check out Games To Play When Bored: Bohnanza

make sure you have it for your next get-together. 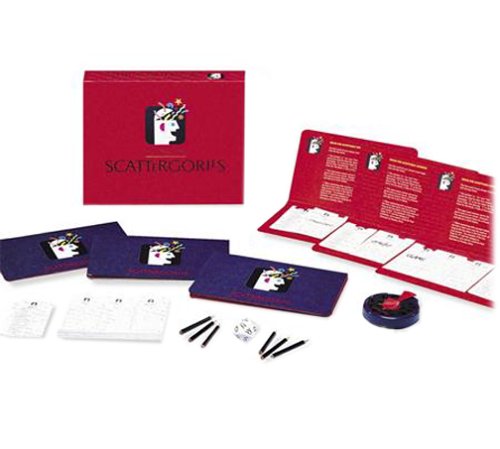