Ghosts and stories of ghosts feature prominently in all world literature and lore.  Such stories amuse and entertain.

Sometimes the ghost functions as an allegory or a symbol for some topic or object.  Whatever its meaning, the ghost is usually regarded as the spirit of a dead person (or its “soul”).  Everyone has his/her own mental image of what a ghost looks like, ranging from the “Casper, the Friendly”-type to nothing more than a mere “feeling” that “something” (not corporeal) is present.

In recorded history, if one examines the beliefs of various eras, one thing is true: for most unexplained phenomena we have a great need for explanations.  Human curiosity stems

Credit: Mattie Bryant, 2011 from a “need to know”, and it is an admirable trait.

However, our limited abilities (whether technological or psychological) do not always allow us to arrive at a proper conclusion for a particular phenomenon.  Our visions are colored by our own prejudices, suggestibility, and impressions.

Talking with the DeadThere is an interesting form of snobbery in the world of superstitions and paranormal beliefs: a person may embrace one concept wholeheartedly and blindly (such as the existence of ghosts), but he or she may reject as laughable another similar idea (such as reincarnation, a fundamental part of Hindu dogma and not so different in many ways from the Christian idea of rebirth in Heaven).

This trend is common—many Americans who believe in Bigfoot (existence never proven), for example, cannot seem to comprehend how the Scottish could believe in the Loch Ness Monster (also never proven).

Proving ghosts’ existence could not be achieved historically.  Eyewitness accounts (notoriously unreliable, and sometimes given to downright chicanery and lies) and perhaps an artist’s sketch or two were the best for which one could hope. In the last 150 years, many methods have been used to prove there is life beyond Death.  Spirit rappings, séances, ghost writing, and sound recordings (most recently in the form of the more professionally nuanced “electronic voice phenomena”) have all been used to show ghosts are real.

Smile for the CameraBut the greatest contributor sustaining a belief in ghosts is photography.  With photography’s invention, and the later public popularity of the medium, those believing in ghosts finally felt that here was a tool to prove ghosts are real.

Nothing could be further from the truth.  Almost from the beginning of popular photography, “spirit” photographs were created and sold (most famously of a posthumous Abraham Lincoln hovering menacingly over various sitters).  The spirit photographers, true con artists versus mere hoaxers, filled a public need to have reminders of their loved ones.  Spirit

Credit: Vic Dilinger, 2011 photography occupied a niche in the same way the séance (which came into vogue around the same time with the rise of Spiritualism).

Ghostly Pictures?Whereas spirit photographers (although not advertising the fact) intentionally committed fraud for money, other people’s amateur ghost pictures were motivated and staged for other, unknown reasons.

And make no mistake: amateur ghost photographs—without exception—are flawed, faked, compromised, misinterpreted, or so indistinct as to be useless.

One of the most famous ghost photos of all time is “The Brown Lady of Raynham Hall”.  The apparition on this stairwell is reportedly of a woman (wife of a former occupant) killed in the manor.  The earliest reported sightings of this apparition

The picture’s creator had been assigned in September 1936 to photograph a staircase in Raynham Hall for a popular British magazine, Country Life.  One of the resultant photos, allegedly of the renowned female apparition, was an overnight sensation when published.

The image depicts an oblong, fuzzy, translucent blob superimposed over a staircase.

Is it a ghost?

Probably not.  Examination of the photos with more modern equipment suggests the ghostly blob is a smear on the camera lens.

Was the photographer an intentional fraud?  Maybe, maybe not.  The lens could have been smeared inadvertently—the preconceived idea the venue was haunted would lead the suggestible to “see” a ghost image in this photo.

However, the roughly humanoid outline, with some indistinct “facial” features, tends toward concluding this might have been staged, the lens already “smeared” (or the film partially exposed) in advance or done on site.

And there is another suspect element.  The photographer’s assistant reported seeing a blur on the stairs; the shutterbug, having just taken one uneventful shot of the stairwell, just happened to be in place to get the second shot in the nick of time.

In some cases a photographer’'s intent at ghost locations is clearly fraud or hoaxing.  Lord Combermere lived in Combermere Abbey (founded by Benedictine monks).  Upon his death in 1891, in fact on the day of his funeral, a very famous “sitting ghost” image was taken.

Credit: Mr. Sybell Corbet, 1891The circumstances of this photo’s existence are odd from the start.

The photographer, Mr. Sybell Corbet (on the day of the funeral while every other servant and member of the household was four miles away at Combermere’s funeral) set up his camera in the Abbey’s library.  Why, specifically, is unknown.  He then left the aperture open for an hour.

It would seem strange for a photographer to set up in an empty room with no subjects on hand.  If Corbet’s intent was to have his equipment ready to take guest photographs later then why bother to open the shutter on the camera?  He reported it required his leaving the plate exposed for an hour.  Photographers don’t randomly go round taking long-exposure pictures of things without reason.  Why Corbet did this is unknown except to say he probably already expected to see something on the negative.  Later, when the plate was developed, the image of what some believed was Lord Combermere was seen sitting in his favorite chair in the library where no one had been at the time.

The photo is an obvious double exposure, requiring no expertise to see the fraud—the “ghost” image in the chair is disproportionately small for the chair size, the ghost doesn’t have legs, and there are motion blurs in stationary objects (which can’t move to create blurring).  This latter indicates the camera, for the second exposure, was not placed in exactly the same spot as the first exposure.

In both this and “The Brown Lady” case the photographers were literally “Johnnies on the Spot”, which also tends to cast suspicion upon the images shown.   For the “Brown Lady”, a sensational photo sells many magazines.  For Lord Combermere’s “spirit lounging” picture, the photographer probably ingratiated himself to a very wealthy and influential family, made a reputation for himself, and in all likelihood was quietly rewarded for the image.

A third famous photo remains mysterious only in the sense that the technique for producing the ghost isn’t readily apparent.  This is the shot of “The White Lady of Bachelor’s Grove”.

Bachelor’s Grove Cemetery near Chicago has a haunted reputation, and its best known apparition is of a woman in white, allegedly a mother buried near her son.  Sightings are

In 1991, however, a local paranormal group, the Ghost Research Society, undertook to get proof of the White Lady.

A photograph was taken of a well-known monument in the cemetery.  The investigative group reported seeing nothing present at the time the picture was snapped.

The result is a famous image of a hazy, ethereal figure (clearly female) sitting upon the base of the monument.

The cross-hatching on her perch is worked into the monument’s base and is not a product of photo manipulation.

What makes this picture somewhat suspect is the allegation it was shot with infrared (inferring ghosts are “hot”, otherwise there would be no image), and the photo was reportedly “enhanced” to bring out its detail.  Also, since the time this picture was taken, hundreds more have been shot by other people of the same site without so much as even a “Brown Lady”-style smudge for their efforts.

No Ghostly PicturesThese are but three of many famous examples of photographs of “ghosts”.

In the cases where the image is indistinct it is the observer’s suggestibility and predisposition to believe that resolves these images into ghosts in the mind’s eye.

In cases where a more recognizable image is present, one can still almost be assured some trickery is at work.

In either scenario no proof of a ghost has been presented, only proof that someone took a photograph of something.  In today’s world of Photoshop fakery all ghost photographs are suspicious; frankly, “ghost hunters” should probably give up still photography as a medium of evidence gathering.  Digital motion pictures, while not tamper proof, may be less suspect. 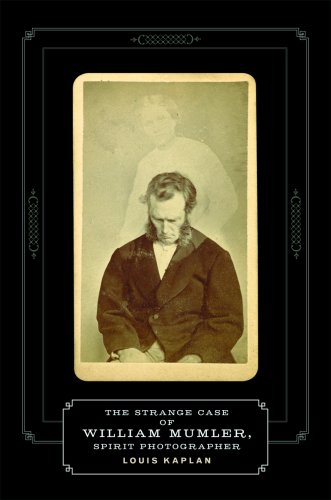