People just love their garden gnomes! Those little guys liven up any outdoor space. Gnomes have been referred to as trolls, elves, and fairies, but the garden gnome is by far the most popular for homeowners. Some are said to bring good luck, while others are nothing but bad news.

People love to collect these little guys. There are even festivals that attract happy owners every year. Some of these folks belong to special clubs where they regularly meet to trade and collect gnomes (as if they were precious metals). These owners are quite serious about their hobby and are happy to share their knowledge on these whimsical garden ornaments.

The traditional male garden gnome is a small character with an elf-like appearance and a head that is a bit too large for his body. They have human features, and most males have white beards. Some have pointy ears and a devious smile, while others possess a friendlier and more welcoming grin. Many of the males wear brown trousers, felt boots and a long sleeved shirt with a wide leather belt to hold their tool pouches. The males also sport a pointy hat, often red in color. The females wear long skirts and long-sleeved blouses with greenish colored hats.

Do you love your gnomes? Do you meticulously decorate your garden space with these playful  little characters, putting them in just the right places? Are you known around your neighborhood for your gnomes? If you answered "Yes!" you're not alone. Millions of people, regardless of whether or not they have a "green thumb," enjoy collecting these amusing little Garden Gnomes with Lampgarden gems because they make any yard festive and fun.

The garden gnome was originally handmade with terracotta clay. They were treasured and valued as collectible garden ornaments and usually passed down from generation to generation. The first known German garden gnome is reported to have been made sometime in the 1800's. While the first recorded appearance of a gnome in England is estimated to be around 1840 at the estate of Sir Charles Isham, the 10th Baronet of Lamport Hall. The tradition of garden gnomes in the United Kingdom is credited to Isham.[3682]

Two of the first individuals to generate these little characters in quantity around 1872 were Philipp Griebel and August Heissner. The Heissner gnomes were well known throughout the world, and it was considered good luck to place them in the home or garden.[3682]

The production changed in the early 1960s when companies began to mass-produce the popular garden decoration, using plastic and resin. This change resulted in the loss of popularity and value for the onetime cherished little garden guys.[3682]

There are popular stories of garden gnomes, busily working around the yard at night, taking seeds from flowers and planting them elsewhere in the garden. These little folks cultivate the earth so that the look of the garden is constantly changing and unpredictable. But, not all fill their days with busy work. Some are a bit on the lazy side, preferring to catch some z's rather than labor in the yard.

These garden folks are popular decorations, but they're often the objects of desire for pranksters. These individuals steal these little guys to return them "to the wild." This practice, known as "gnoming," involves seizing someone's garden gnome, taking it on a trip, and then taking photos of the gnome in front of famous landmarks. The pranksters then send the photos to the brokenhearted owners.

Legend says that no person should remove a gnome from a garden because it "disorients" the little character, and it brings bad luck to the garden and the thief(s).[3683] Despite the warning, gnoming is quite popular, and there are clubs and groups dedicated to the practice of kidnapping them. Gnoming was also the basis for Travelocity's "Roaming Gnome."

Gnomes come from a variety of backgrounds and ancestry, and here are a few of the types:

Garden: This is the most common and beloved ornament. They live in gardens and enjoy cultivating the yard.

Forest: This is another common statue, but the forest type hardly ever comes in contact with humans.

House: These are said to be the "most knowledgeable." The kings are chosen from this lineage.

Dune: They are a bit larger in size to the Forest, and they wear lackluster clothing.

Siberian: These are similar in nature to trolls, and they are said to have an awful temper. Legend warns - it is never wise to make this type angry because they enjoy getting revenge.

Whether you believe they are good luck or not, you have to admit, they liven up a garden. But not only a garden, these playful little folks brighten up any space. You can place them in rock gardens, out by the pool or patio area, next to the front or back door, or anywhere. Gnomes are cute and attracting, so be sure to keep an eye on yours, least you and your little guy becomes a victim of gnoming. But who knows, although you may not enjoy seeing photos of your long lost fellow in front of well-known historical sites, they may enjoy the adventure. 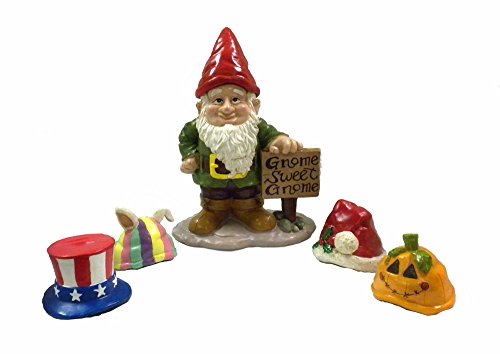 Take a Trip to Gnomesville