Gold Macbook is a Home Run for Apple

My wife was sold the moment she saw a photo of the recently released Macbook computer in gold. After nearly six years with her 13-inch unibody Macbook, she was due for something new. The conversation went something like this:

Me: Hey babe, I think it is time we look at upgrading your Macbook. What do you think of the Macbook Air?Wife: Does it come in gold?Me: No, but it has a 13-inch screen, great battery life, Intel i5 processor... (I kept going on and on, but all my wife heard was "No, blah blah blah").Wife: I really like the gold one; it's beautiful!Me: Yes, it looks nice but it only has the one USB-C port and... (all my wife heard was "Yes, blah blah blah")Wife: So I can get the gold one?! Yes! I am so excited! You're the best husband ever!

And thus, we added a gold Macbook to our family. Having read the specs and some early reviews, I wasn't thrilled to be purchasing this new 12-inch gold computer. But I must admit, this all changed once it arrived and we unboxed it.

I am extremely impressed at how thin Apple was able to make this new Macbook. The new Macbook weighs in at a miniscule two pounds, about a half pound lighter than the current 11-inch Macbook Air and a full pound under the 13-inch Air. When the lid is closed it feels a bit like an iPad in your hand. One way in which Apple accomplished the thinner profile was by making the computer fan-less. Not only does this save space, but it eliminates the noise from inside the machine when things are running a little warm.

The new Macbook coming equipped with a retina display was not a surprise at all. The 12-inch screen sized was rumored early on, and I am still unsure why Apple chose this particular size. Either way, upgrading from a non-retina to a retina display is a huge difference.

The suggestion on the new Macbook's battery life is for all day use for everyday activities. Apple claims the battery will endure nine hours web browsing. Streaming movies or any other processor intensive activities will reduce battery time. For most users, the battery will likely last around three days of normal off and on use. This is a slight improvement over the current Macbook Air lineup.

USB-C: the One Port

One the biggest design changes to the new Macbook is the exclusion of all the previous ports (except for a headphone jack) and the adoption of USB-C. This one port can be used to charge the laptop and can be a USB, display, HDMI or VGA port. Of course, adapters will be required and are sold separately. The idea is that you still get all the ports we have become accustomed to, but now they are all integrated into one with the use of adapters. Good or bad? Well, the USB-C brings faster data speeds (over USB 3.0) and allows for the slimmer design. This is great for portability, but may be an annoyance for those that use their Macbook like a desktop computer with multiple peripherals.

So far, with minimal use on our new gold Macbook, the trackpad feels a bit funky. It is different and it will take some getting used to. However, the new trackpad incorporates Apple's "Force Touch", which differentiates how forcefully a user touches and presses on the trackpad. At this time there isn't anything built into the OS X operating system to utilize this new feature, but with the upcoming iOS 9 and El Capitan release we will begin seeing this new technology put to use.

As mentioned above, the USB-C is the only port and is the new way to charge the Macbook. This means Apple had to change course, away from the Mag Safe adapters that have saved many laptops from people tripping over charging cords. This is a feature I will miss. The Mag Safe made it simple to plug the laptop in, an easy pull to unplug, and was an amazing safety feature when cords are strung across the floor. I cannot count how many times I or someone else has pulled on my Macbook Pro charging cord and yanked it out of the laptop, which is of no consequence since it simply separates from the magnet.

The USB-C cable is a bit tough to insert and pull out, meaning the first time someone's foot catches the cord while plugged into the Macbook the computer is going for a fall. The good news on the USB-C is that it can be plugged in with either side face up. The bad news, of course, is no Mag Safe.

It Comes in Gold!

Did I mention the new Macbook comes in gold? I must say it is a beautiful looking color and computer. Although I prefer the silver, my wife is head-over-heals for the gold finish. And apparently, so are many other consumers. At the time of writing the gold Macbook is shipping 3-4 weeks out from order date. The gold version has become more popular than I believe Apple anticipated. I originally ordered mine through Apple's online store, only to receive the four week shipping notice. I canceled and was able to order one through Amazon, which shipped in two days (and was $10 cheaper!).

We purchased the standard, bottom version of the gold Macbook - 8GB Ram, 256GB solid state HD, and a 1.1ghz Intel Core M processor. The 1.1ghz is a bit misleading - in my early use the Macbook feels much faster than the spec on paper. It has a large cache and "turbo charge" technology to speeds things up.

Overall, this is a great laptop for probably 90% of computer users. I, personally, prefer my Macbook Pro because I do a lot of work in Adobe Lightroom and Photoshop. However, for most users where their day-to-day use is web browsing, email and basic Microsoft Office applications this new Macbook will be just fine. The 12-inch screen might deter some people, but if you value portability than this is going to fit you perfectly.

Oh, and did I mention it comes in gold?! 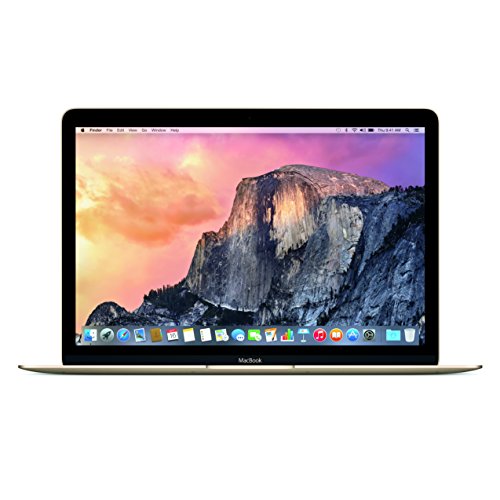 Apple MacBook MK4M2LL/A 12-Inch Laptop with Retina Display (Gold, 256 GB) NEWEST VERSION Amazon Price: $1,289.00 Buy Now(price as of Jul 2, 2015)
The stock of the gold version seems to come and go, but when Amazon does have them in stock their shipping time is much quicker than Apple.
Next >> How to Add Blur to Your Photos with Image-Editing Software