The slice of life genre is just as it sounds, they are animes in which focus on a slice out of the life of average people. Now why would anyone want to watch an anime about average people doing perfectly normal things? Well obviously because their lives are usually so much better than your own. If you have always had trouble navigating the troubling or delicate situations in life, slice of life anime shows various ways of how to do that. They also provide a usually uplifting look at life in general, motivating you to go outside and on occasion live it to the fullest.

Minami-ke is a simple story or three sisters. There is the eldest sister Haruka who is in high school and taken up the guise of being the mother to her younger sisters. Kana who is a hyper and playful middle schooler, always up to mischief. Then finally, the youngest elementary school sister Chiaki who is grumpy and almost as adult in nature as her oldest sister Haruka. Minami-ke follows these three sisters through their extraordinarily normal life, focusing on how they depend on each other during common life situations. These three girls have to deal with everything from love confessions to household chores.

Minami-ke is probably one on my favorite slice of life series ever, it also has had several sequels made so while it may only be 13 episodes, there is lots to see. While it may sound particularly ordinary, as all series from the genre do, is it actually quite fully packed with likeable diverse characters and hilarious situations. In fact, it is much more comedy than anything else in thanks to no small part between the comical differences between sisters Chiaki and Kana.

Lucky Star is, in its essence, an anime about absolutely nothing. It follows the life of anime otaku Izumi Konata and her variety of unique friends through their daily life. Meant to be a comedy anime, Lucky Star relates to fans by showing an anime otaku main character going about her normal life with relatively normal friends. Everything from doing homework, cooking, eating, playing video games and watching anime is shown. Usually things are very tame, but the group usually ends up in comedic situations which only add to the fun. It is truly a slice of life anime in which anime fans can relate to. It also has a pretty catchy (or arguably annoying) opening song.

With Lucky Star, you either love it or find it unbearably annoying. It is probably one of the most argued over animes ever and a staple for any anime fan. It is full of anime character stereo types like the tsundere, dandere, and kuuderes. However, most people dislike it because of its strong moe  art style, which is basically overly cutesy anime characters that look like children.

Yuuta Takemoto, Takumi Mayama and Shinobu Morita are three young men who live in the same apartment complex and are students at an art college in Tokyo. One day, they are introduced to Hagumi Hanamoto, the daughter of a cousin of Shuuji Hanamoto, an art professor, who has come to live with Hanamoto and has become a first year art student at the art school that everyone attends. Yuuta and Shinobu both fall in love with Hagu, but Yuuta hides his feelings and tries to be a friend to Hagu while Shinobu expresses his love in ways that seem only to scare Hagu, such as calling her "Mousey" and constantly photographing her. Hagu herself, though initially timid and afraid of company, gradually warms up to the three. The story follows the group of friends as they experience unrequited love, love triangles, graduating from college, finding job, but most importantly learning more about themselves.

Honey and Clover is probably the most realistic of the slice of life animes listed here. With realism comes a certain degree of boringness to the story. However, if you find yourself fascinated with the human mind and the complexity of emotions, this is definitely something you should check out. I have found that it is extremely relatable to the problems in which college students are likely to experience. So if you are a prospective college student, it is worth checking out. 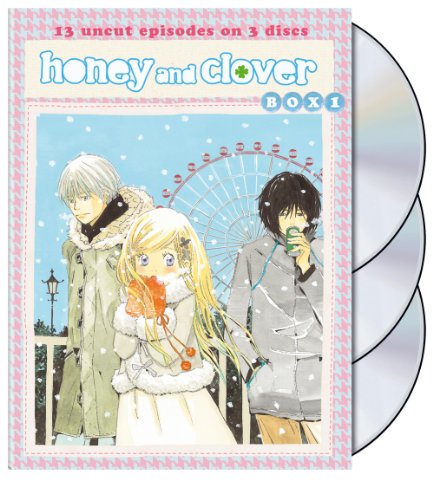 Nichijou rather literally translates into 'regular life', so as the name suggests the story is quite simple, about a regular average school life. However, inside the Nichijou, the contents are rather quite the opposite. The setting is inside a school that is anything but ordinary. A school in which watching the principal wrestle a deer or a robot arm popping from a sweet roll are quite commonplace. While the school is quite extraordinary, the lives of the students are not. Nichijou follows the average complications of school life like making friends and studying for tests in a school that is not even close to normal, making this a slice of life story for all tastes.

Nichijou, while exceptionally average in story, is astoundingly beautiful in animation. It is bright and exciting to watch just for that reason. if you are not a particular fan of the slice of life genre because it can often be a bit boring, but like comedy, this is something to check out. Because of the odd school situation, it is just so comical to watch all these strange things going on around the students and see them react to it as if it is perfectly normal.

It's a new school year and Ryuuji Takasu discovers that not only is he in the same class as his best friend, Yuusaku Kitamura, but also Minori Kushieda whom he's had an undisclosed crush on for quite some time. Along with the two of them comes the "Palmtop Tiger", tiny Taiga Aisaka and Minori's best friend. Despite her small stature, Taiga takes nothing from anybody and is secretly in love with Kitamura. Ryuuji and Taiga, despite their oil and water relationship, agree to mutually support each other in their quests for their hearts' desire. Toradora is a wonderful story about friendship, emotions, and how feelings develop and grow throughout life.

Toradora is perhaps one of the most addicting romances ever written. It is not exactly a sappy drama, but to watch the relationships between the characters grow and change throughout the series is an absolute thrill. Not to mention the exceptionally eye-catching animation. There is nothing more spine tingling than watching one of the characters get mad in the show and watching their hair frizz out like an angry cat.