My name is Rose and I am a Canadian freelance writer. I love to tackle human rights issues and anything related to the betterment of society and our planet.  For a sorted directory of my articles: RoseWrites.netboard.me Love to write too? Join me on here on InfoBarrel.
InfoBarrel is a writing platform for non-fiction, reference-based, informative content. Opinions expressed by InfoBarrel writers are their own.
InfoBarrel > Lifestyle > Holidays & Celebrations > Thanksgiving

They'll be proud to partake of your pecan pie

Well, the winemakers came to visit last night and I sampled the wine I'll be getting for making Thanksgiving dinner this year.

As previously mentioned, I was offered homemade wine in exchange for making a stuffed turkey breast dinner.

And after a few glasses, I found myself sloppily agreeing to make a gluten-free pecan pie, along with my pumpkin pie. And for the kids I'll be making pumpkin chocolate chip cookies.

My man-servant reminded me of that line from When Harry Met Sally when Harry (Billy Crystal) says to Sally (Meg Ryan): "But I would be proud to partake of your pecan pie." Hence, the reason for my subtitle. Up next is the 52 second clip of that scene - those of you over 30 might remember it.

When I was first learning to bake, I thought pecan pie already contained maple syrup. So when I discovered that corn syrup was most commonly used in it, I thought I'd change that.

In all fairness, I don't feel that an egg-less version tastes the same. If you find a comparable vegan recipe then good for you (I haven't yet).

And about the pecans. I recommend buying pecan halves and chopping some for the filling, if you want. I always thought they tasted better halved - the same holds true for walnuts. And all it takes is a few stale pieces to ruin it.

I created my recipe from three sources. Good Housekeeping magazine has a basic recipe[1] that I've tried in the past which worked. However, I wanted to try a simpler cooking method and my filling to be made with maple syrup instead of corn syrup.

Yet, when I viewed a video of how to make a pecan pie using Karo[2] syrup, I was thoroughly impressed by the cooking method. I've never understood why some recipes recommend pre-baking the pie crust. (Whenever I've done that - even with pie crust protectors on - my crusts taste too well done or hard). What's more, Karo syrup isn't a high fructose corn syrup.

Finally, a couple of years ago I came across a recipe[3] by Carrie Vitt at Deliciously Organic. Even though I'm thoroughly pleased with my gluten-free pie crust (using Bob's Red Mill gluten-free flour), her pecan pie filling included maple syrup.

So, I decided to use 3 tbsp. butter (not 2 tbsp. or 4 tbsp.) and I kept the brown sugar amount that Good Housekeeping recommends. I tried the Karo video baking method (which worked beautifully). And, I used Canadian Grade A Light maple syrup (instead of Grade B) as in Carrie Vitt's recipe, but omitted the maple sugar.

Up next is the 2:03 second Karo video. I adopted the same cooking method (skipped the pre-bake) and "my pecan pie was practically perfect." (Those last 5 words were supposed to sound the way Harry spoke to Sally).

How to Make Pecan Pie

If you require a gluten-free pie crust, I provide instructions to make 1 pie crust in my Gluten-Free Pumpkin Pie recipe article. If you are making two pies, you may wish to double it.

For those of you who don't need a gluten-free pie crust, you can use any 9-inch unbaked (or frozen) deep-dish pie crust.

Put a baking or cookie sheet in your oven while it's preheating. Pour pecan pie filling directly into your frozen pie crust (no need to thaw it out first) and bake it on the preheated baking sheet in your oven. The heat from the already hot baking pan will thaw the frozen crust.

1 cup Canadian Grade A Light maple syrup OR other Grade A maple syrup
1/2 cup brown sugar (packed)
3 large eggs, lightly beaten
3 tbsp. salted butter, melted (if using unsalted, add a pinch of salt)
1 tsp. pure vanilla extract
1 tbsp. gluten-free all purpose flour + pinch xanthan gum
1.5 cups (6 - 8 oz / 150 - 200 g) whole pecan halves
Directions:
Ensure oven racks are set so that your pecan pie will bake dead center of your oven and preheat to 350 F (175 C).
In a tiny dish, melt butter and set aside.
In a large bowl, lightly beat eggs. Note: I've tried the usual method of gently mixing the eggs too, but I've found that lightly beating them causes the whole pecan halves to float up to the top of the pie (which I prefer). It all depends on what you want, though.
If you want the pecans to sink into the pie, chop up about half of them, don't beat the eggs, and thoroughly mix them into filling. You'll have some throughout the filling and some on top of the pie.
Add melted butter, maple syrup, brown sugar, vanilla extract, flour, and xanthan gum to the eggs and combine thoroughly. Add whole pecan halves last - it helps them float more if they aren't mixed in and weighted down by the liquid ingredients.
Get out your baking pan/cookie sheet and either lightly grease it or use parchment paper to line it (makes any spills a breeze to clean). Pull out your prepared gluten-free pie crust (remove the protective wax paper from it) and scrape pecan pie filling directly into it.
TIP: I find tapping the edge of the filled pie crust helps the whole pecan halves rise to the surface.
Place filled pie crust on prepared baking sheet and carefully place in the center of your oven. Bake for 60 - 70 mins. Check on it after 30 minutes, periodically, to see if the crust or pecans are browning too fast. If so, cover with a tented piece of foil and reduce oven heat slightly.
How to check if done
Using the back of a wooden spoon, tap the center of the pie, it should spring back. You can also insert a food thermometer, the pie is done when the middle reads 200 F (93 C).
Important: Don't make my mistake and cut into it too soon. You should wait 2 hours for pecan pie to cool on a wire rack before serving.

Just Before it Hits the Oven

If you can't find Canadian Grade A Light Maple Syrup 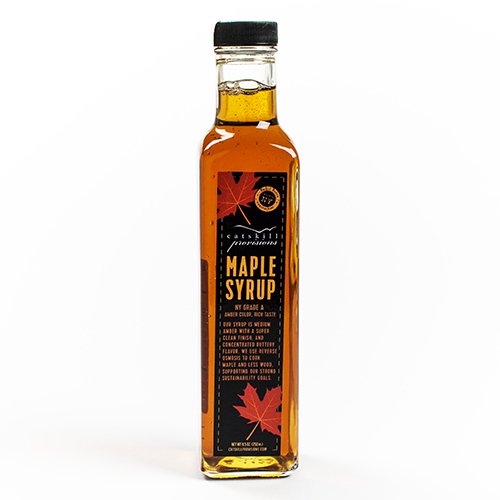 New York State Grade A Maple Syrup by Catskill Provisions (8.5 fluid ounce) Amazon Price: $18.99 Buy Now(price as of Sep 16, 2016)
I recently read an article by Sarah Niss in the September issue of New York States of Mind titled "Tapping Potential in New York's Maple Industry" and Catskill Provisions has come up with some incredible syrups (and maple syrup-based products, including pancake mix, raw honey, and chocolate honey truffles). Even a Canadian would approve.

A World of Thanks - Thanksgiving Celebrations Around The World

9 Tips to Improve Your Thanksgiving Turkey

Be An Introvert - Be Yourself During the Thanksgiving Holiday

Thanksgiving and the Pilgrims: Just the Facts