The Exmoor pony is one of Great Britain’s native mountain and moorland breeds. There are two types: the Acland and the Withypool. The Withypool is larger, slightly darker and has a straighter profile. ‘Exmoor’ has the literal meaning of ‘child of the moor’.

It is one of the oldest of England’s native breeds and one of the most primitive. Like the Eriskay, the Exmoor has had little interference from man and today still fends for itself on the windswept moors, just as the Dartmoor pony does on Dartmoor. Exmoor itself is now environmentally sensitive, due to overgrazing and the wild ponies form part of the natural ecosystem. Increased enclosure and agriculture on the moors has led to a drastic reduction in the number of ponies and the breed is now considered endangered.

The purebred ponies which live on the moor have little contact with humans. Every autumn they are mustered, inspected and the foals are branded. The bleak conditions have ensured survival of the fittest and the ponies are extremely tough with few health problems. The Exmoor has several features which are unique. The hooded or toad eye has a heavy, fleshy upper eyelid which protects the prominent eyes from the wind and rain. The ears are small and thick thus minimising heat loss. The wide nostrils draw cold air into large nasal passages where the air is warmed before it enters the lungs. Mastication of the rough, coarse vegetation is aided by the provision of an extra molar tooth.

The Exmoor also has an ice-tail or snow-chute. The top of the tail is furnished with short, coarse hairs which lie in a fan shape. This channels snow and rain off the pony to the ground. Once winter is over the ‘ice-tail’ is shed and regrows in autumn. In winter the pony grows a double coat consisting of a soft, springy inner layer which insulates against the cold and slightly greasy outer hairs which provide virtual waterproofing. The summer coat is sleek and shiny.

The Exmoor has similar colouring to other primitive horse breeds. The ponies are brown or bay (occasionally dun) with black points. A pure Exmoor should have no white markings. The back is the darkest area with the colour shading to a light oatmeal colour on the undersurfaces. The ‘mealy’ muzzle and eyes are also buff in colour. The hooves are black. Some of the Highland ponies from Scotland also shows traces of its primitive ancestry by way of a dorsal stripe and markings on the legs. 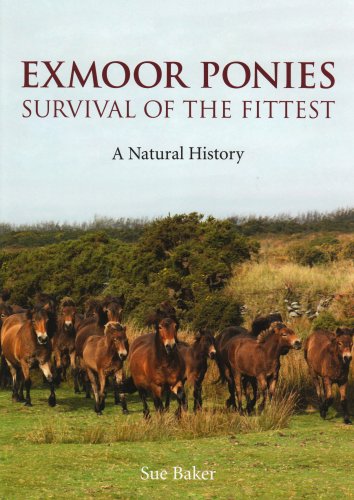 Exmoor Ponies Survival of the Fittest: A Natural History Amazon Price: $76.71 Buy Now(price as of Dec 8, 2015)
This 2256-page treatise explains the history of the Exmoor Pony.

Height ranges from 11.2 to 12.3hh. They weigh from 650 to 850 pounds and are remarkably strong for their size. The forehead is very broad and the eyes wide apart. The chest is deep and wide with well-sprung ribs and a broad, level back. The overall appearance is of a symmetrical, compact pony showing poise and balance. The legs have plenty of bone and the hooves are neat and hard. The pony stands straight and true with the legs set well apart.

The first written records of Exmoors appear in the Doomsday Book.

The Exmoor can take his place in virtually any equestrian discipline. While ideal for children, they are sturdy enough to carry a smaller adult. They are handy and bold and do well in combined driving events. Their traditional use was as pack ponies and for shepherding. They are natural jumpers, being sure-footed and well-balanced.

There have been exports to Canada but the breed has been slow to establish itself there. The Rare Breeds Survival Trust classifies the breed as ‘endangered’ and concerted efforts are being made in several countries to bring the breed back from the brink of extinction. Because of the low numbers (maybe less than 1000 ponies worldwide), there is little genetic diversity to call upon.