The Highland is regarded as a ‘large pony’ in Great Britain’s list of mountain and moorland breeds and is in fact the largest of the British native ponies. Other ‘large ponies’ in the group include the Connemara, New Forest, Dales, Fell, Welsh Cob Section C and Welsh Cob Section D.

The Highland pony originated in the Western Isles and the highlands of Scotland. Those on the islands were once smaller and lighter-boned due to the harsher conditions but the types have now merged. The island ponies have also exhibited the more unusual colours associated with the Highland including liver chestnut with silver mane and tail (often referred to as ‘bloodstone’). 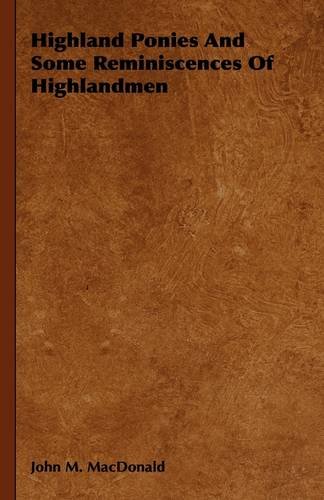 Highland Ponies and Some Reminiscences of Highlandmen Amazon Price: $34.95 $3.49 Buy Now(price as of Nov 3, 2016)
This is one of the very few books ever published on Highland Ponies. There are detailed chapters on the various families of ponies. A fascinating book which also gives information on many of the studs.

Although the Studbook was established in the 1880s, there has been no breeding scheme resulting in a variety of types and bloodlines. The Highland Pony Society was formed in 1923 and small numbers of Highlands have been exported to various countries.

The height range is from 13hh to 14.2hh. Greys, browns, blacks and duns of varying shades make up the majority plus the already mentioned bloodstone. The duns will often have a dark dorsal stripe down the middle of the back and a stripe across the shoulders. There may be zebra type markings on the legs. These body and leg markings are indicative of ancient breeds. The Przevalshy horse, Koniks and Fjord ponies are other breeds which exhibit these markings. The Exmoor is one of England's mountain and moorland breeds that also exhibits primitive markings. A small star is the only allowable white marking. Cream and grey dun ponies may whiten with age.

The forehead is broad and the profile straight or slightly convex. The ears are small and the nostrils wide. The muscular neck is arched and the shoulders well laid back. The chest is deep and the body compact with well sprung ribs. The feet are well shaped with tough horn. The abundant mane and tail are long and silky and the legs are feathered. The winter coat is thick providing good insulation against the elements.

The Highland is economical to keep, has a robust constitution and is a kind, willing worker. He has the appearance of a mini-draught. Its compact, sturdy conformation has made it a popular choice for local crofters and draught work has been part and parcel of its history. It has also been used as an army mount, for shepherding and as a pack pony. It has a fine reputation as both a driving and riding pony and in more recent times has been used extensively as a trekking mount, being docile, reliable and sensible. It is certainly strong enough to carry most adults with ease. 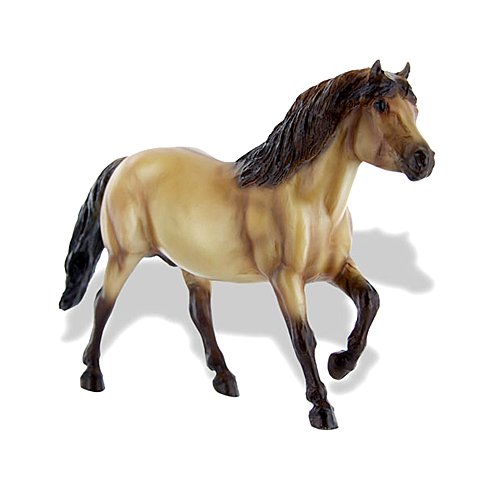 Breyer Traditional Highland Pony Amazon Price: $59.98 Buy Now(price as of Nov 3, 2016)
Scupted by expert craftsmen, Breyer models are true likenesses of the breed they represent. These are hand- painted and highly collectible.

Being so calm, it is also a good choice as a mount for the Riding for the Disabled. Highlands were, and are, used to pack out deer and game on the estates of Scotland. Deer carcasses may weigh up to 114kg but the Highland, which may weigh up to 550kg himself, will not be fazed. It is a safe and clever jumper although not fast. For this reason it may be crossed with the Thoroughbred producing an excellent hunter type with more speed than the purebred Highland.

The Rare Breeds Survival Trust has the Highland pony listed as ‘at risk’. It is to be hoped that this breed will not go the way of that other Scottish breed, the Galloway, which has become extinct.