The Suffolk Punch is a draught breed endemic to the counties of Suffolk and Norfolk in East Anglia, England. The ‘Punch’ was added to the name because of his compact appearance. It is one of the livestock breeds which originated in England and which later spread to all parts of the globe.

At the moment the breed is listed as ‘vulnerable’ by the Rare Breeds Survival Trust and it is cited that there are more giant pandas in the world than there are purebred Suffolks. This is a sad state of affairs indeed. Part of the problem is the small gene pool which decreases as the total number of animals drop.

Credit: http://commons.wikimedia.org/wiki/File:PairSuffolks.jpg The Suffolk has several unique features which set it apart from other heavy horse or cold-blooded breeds. For instance, it is always chestnut in colour although seven shades are recognised. When referring to Suffolks, ‘chesnut’ should be spelt without the extra ‘t’. It is also one of the few clean-legged heavy horses, another being the Percheron. Suffolks are remarkably uniform and cannot easily be mistaken for any other breed. Apart from being always ‘chesnut’, there is little variance in the conformation, temperament or type.

The Suffolk Punch is the oldest of Britain’s endemic draught breeds. Other native draught breeds include the Clydesdale and the Shire.

It is believed to descend from the ‘Great Horse’, dating back to 1506. There is a specific reference to the breed in William Camden’s book, Britannica, published in 1586. There have been infusions of Norfolk Trotter, Norfolk Cob and Thoroughbred over the years. All Suffolks now trace back to Thomas Crisp’s Horse of Ufford. There is some dispute as to when this stallion was foaled with both 1760 and 1768 being touted.

When the greatest development of the Suffolk was taking place, the region of Norfolk and Suffolk were quite isolated, bounded on the north, south and east by the North Sea and on the west by the fens. These flat, heavy soils were ideal for cropping but being clay, a clean-legged horse was much preferred. Strength, longevity, stamina and tractability were all bred into the Suffolk.

Herman Bidell was the first Secretary of the Suffolk Horse Society which was founded in 1877. Volume 1 of the Suffolk Stud Book is a mighty undertaking, containing the pedigrees of all Suffolk horses living at that time. It also includes a history of the breed and an account of Suffolk and its people. The Book is illustrated by Ipswich artist, John Duvall.

Around the 1930s, just as the Suffolk began to be introduced outside the local area, mechanisation began to take over. Horses, especially draught horses, were no longer needed and were a drain on resources. Huge numbers were sold with many sent off to slaughter-houses. By 1991, it was estimated that only 200 odd Suffolk Punches were left in Britain. At this point, breeders suddenly realised that the equestrian world was about to lose a valuable asset. Concerted efforts were made to stop the decline and at the moment the status of the Suffolk Punch is still regarded as critical. 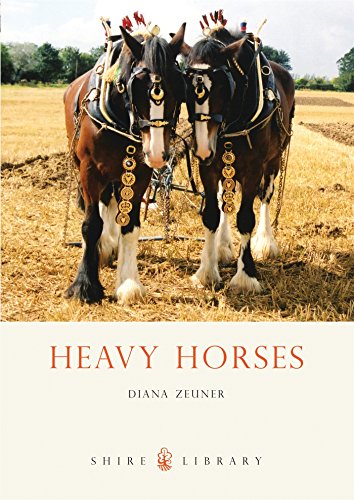 Heavy Horses (Shire Library) Amazon Price: $12.95 $5.36 Buy Now(price as of Mar 26, 2016)
Heavy horses played a pivotal role in the development of many countries. This book examines the different breeds and their historical role.

The Suffolk has a large head with a broad forehead, active ears and an intelligent expression. The neck is deep and arching and the massive shoulders are somewhat upright as befits a draught animal.  The back is short and strong with the croup level and a higher tailset than most other breeds. The Suffolk once had a reputation for weak, ‘shelly’ feet but this is no longer the case. Careful breeding has resulted in today’s Suffolks having round, hard hooves which stand up well whether shod or bare. Major shows in East Anglia encourage continued attention to breeding good feet by holding classes for ‘best foot’.

The average height is 16hh but many stallions stand in excess of 17 hands. Weight ranges from 1,900 to 2,200 lbs. When in traction, the relatively short legs give a more direct pull. There is great width in the chest and quarters.

Suffolks are early maturing and extremely docile. They often begin light work as two year olds and can still be contributing well into their twenties. They are good doers, requiring less in the way of concentrates than other draught breeds. The horse has a very willing disposition and great endurance. Its courage has never been in dispute.

As well as tackling all kinds of farm work, it has been used for heavy draught work such as hauling brewery wagons and omnibuses. It was also used to haul heavy artillery during times of war.