Great Duels in the History of Chess: Alekhine vs Capablanca

The year is 1927 and the duel is opposing Capablanca, the reigning world champion to Alekhine, the challenger. This match is crucial as the result will decide the next world champion. The first to win 6 games wins the match, draws being ignored. In the case of a 5-5 scenario, Capablanca will remain world champion.

Will Capablanca manage to keep his title? Will Alekhine manage the impossible and beat him? Before you take the bet, let's have a look at these 2 chess masters.

José Raúl Capablanca y Graupera, or Capablanca is a Cuban player born in 1888. He learned chess at the age of 4 by watching his father play and by the age of 13, he was already the Cuban national champion. On a personality perspective, he is not studying chess seriously, using more time playing tennis, bridge or reading. He is also a playboy and has a lot of success with women.

Back to a chess perspective, in 1927, he seems invincible. Getting the nickname "human chess machine", he did not lose a single game in the period 1915 to 1923 (those years included) and more importantly he remained undefeated at the New York tournament that took place earlier in 1927 and where the chess elite was gathered including Alekhine. For the record he had not lost a single game against Alekhine until this duel.

Can You Find Capablanca's Moves? 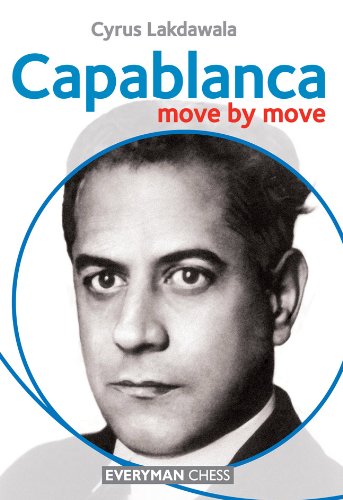 Capablanca: Move by MoveAmazon Price: $29.95 $18.33 Buy Now(price as of Sep 3, 2013)
The "Move by Move" series challenges the reader to find moves played by chess legends. This volume is about Capablanca.

Alexander Alexandrovich Alekhine is a chess player born in Moscow in 1892. He became French in 1925 but is mainly seen as a Russian player.

Contrary to Capablanca, Alekhine is a hard worker, analysing a lot and not contenting himself with a victory unless it is a deserved one. On a personal level, rumors say Alekhine was an anti-semitic, but he always denied it. 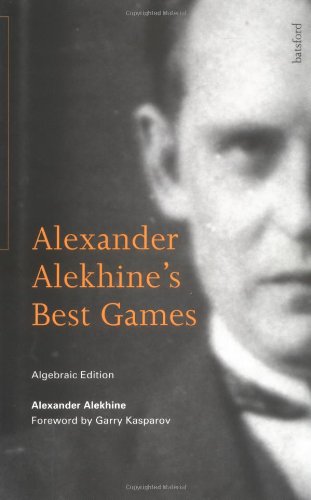 Alexander Alekhine's Best Games: Algebraic EditionAmazon Price: $174.32 Buy Now(price as of Sep 3, 2013)
This book is written by Alekhine himself and contains what he considers his best games. As Alekhine was a hard worker, his analysis of the games are really informative. Be careful not to buy other books with a similar title. They either contain fewer games (originally, it was published in two books but later got merged into one) or are using old-fashioned notation which is unpleasant to read.

The match is taking place in Buenos Aires, Argentina. To this today, it is considered as one of the most important duels in the history of chess. Both players are among the very best of their era, both are at the height of their "powers", and both have a very different personality.

Alekhine vs Capablanca, photo of the match

Alekhine creates the surprise already in game 1. After a passive opening where Capablanca did not show a real wish to get an advantage, Alekhine took the benefit of a tactical mistake of his opponent to win a pawn. With precise play, he managed to win his first game against Capablanca, which made sensation.

Below is a critical moment (actually Alekhine had to calculate all this several moves earlier). Alekhine has the black pieces. What should he play?

Excercise from the first game: what should Alekhine (black pieces) play?

Alekhine will explain later that he was happy not only to have won this game but to have found some weaknesses in his opponent's play.

The third game is another decisive one. Alekhine castles a bit late and Capablanca takes advantage of it by getting 2 active minor pieces against 1 passive rook. The position is probably lost but Alekhine makes it even worse by missing a tactical threat (diagram).

Exercise from game 3: what should Capablanca, with the white pieces play?

Some draw games can be interesting. The 6th one, for example was quite interesting. But let us focus on the decisive games as they are the ones who decide the outcome of an encounter.

The 7th game is a complex one with both sides attacking at the same time, with endangered kings but Capablanca eventually triumphs, taking the lead of the match.

The 11th game is contains many positions that are difficult to assess. Kasparov, in his book "My Great Predecessors" (see more about it in "Further reading") points out many mistakes by both players. On the other hand Alekhine played very well the ending.

"Alekhine played the finish excellently. I am not able to win like that"

Please remember that before this encounter Alekhine had never defeated Capablanca. Here, this is what he does, and twice in a row! What a sensation. With this win, Alekhine also takes back the lead.

Something surprising is that Capablanca made a strange mistake. With no apparent reasons, he played his rook in a square with no future and in danger to be taken. Alekhine threatened to imprison this rook and Capablanca persisted in his mistake by leaving the rook where it was.

Probably a blunder but coming from Capablanca, it is surprising.

Except the 17th and 20th games, those draws were standard uninteresting draws. But let's discuss a bit about number 17 and 20. In both, Capablanca got an advantage (positional in game 17, material in game 20) but was unable to convert it into a win.

"The draws in the 17th and 20th games had a dispiriting effect on Capablanca: he did not know how he could defeat Alekhine"

- Kasparov, On My Great Predecessors part I

The "human chess machine" is human after all. Alekhine is playing more precisely, increasing the pressure and Capablanca blundered again. The one who managed to score a 96.4% win in a simultaneous event against 602 opponents had suddenly lost his precision.

Exercise from game 21: Capablanca blundered and played Rd1. How can black punish him?

Capablanca is finally proving who he is at the end of the 22nd game by defending precisely in a difficult position (even lost at one point). He also gets the advantage in game 27, but Alekhine manages to get a draw through a perpetual check.

The 29th game is a beautiful one, despite some mistakes made by Alekhine because the Cuban champion shows some accuracy in exploiting his opponent's mistakes.

The 31st game is for sure disappointing for the Cuban fans. With a pawn advantage and a bishop against a knight (generally an advantage when pawns are spread on the board, like in the game), Capablanca makes a mistake which reduces his advantage.

Disappointed, he offers a draw. But why? He still had the advantage, he should have tried to win this position! Timman, a well-known chess analyst said that Capablanca proposing a draw here showed he had resigned the match in his heart.

Game 32: Alekhine Wins, Getting Close to the World Champion Title (5-3)

5 victories to 3. One more win and Alekhine would become world champion! Small imprecisions by Capablanca and great play by Alekhine.

Exercise from the 32nd game: what is the best move for white (Alekhine)?

After a match he had been waiting for at least 6 years (he had challenged Capablanca in 1921 but had not gathered enough money for the match) and 34 games, Alekhine is declared 4th chess world champion. As said in game 31, it seems to many that Capablanca lost the match on game 31.

"After my win in the previous game, the expression of my opponent's face showed that the outcome of the match was decided"

"Dear Mr Alekhine! I resign the game. You are therefore the world champion. Please accept my congratulations and best wishes..."

- Capablanca, resigning the 34th game before resuming it

What to Think of the Match?

On a chess level, this match was fantastic. So many great games, so much to learn. On the human side, many people blamed Capablanca for not having prepared enough, for not having taken it seriously enough and thought he could have won the game otherwise.

"On the whole, the reasons for the champion's failure are clear: excessive self-confidence and, as a consequence, weak preparation"

- Kasparov, On My Great Predecessors, part I

A rematch was discussed several times but never happened. Capablanca wanted to change the rules (to avoid such a long match) and Alekhine refused categorically. This is of course a shame as a rematch would have been fantastic to witness. The two met several times in tournaments but without any clear winner (one won here, the other won there).

Two lessons that can be learned from this match are: "don't underestimate your opponent" and "hard work can win over natural skills". This is positive if you are not a chess genius. Just work hard and you will obtain a good level. If you have natural chess skills, you still are not invincible and should not underestimate your opponents. In both cases, the conlusion is: "stop surfing on the internet and back to work". 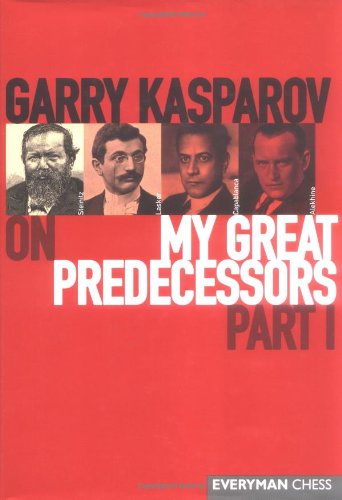 Garry Kasparov on My Great Predecessors, Part 1Amazon Price: $45.00 $20.95 Buy Now(price as of Sep 3, 2013)
"On My Great Predecessors" is a good series written by Kasparov himself about chess champions before him. This first volume includes Steinitz, Lasker, Capablanca and Alekhine. It contains of course this 1927 duel between Capablanca and Alekhine and even looks at it in 2 parts: through the eyes of Capablanca and through the eyes of Alekhine. Kasparov quotes earlier analysis when relevant (he has such a huge knowledge of analysis published here and there) and of course adds his own analysis when necessary (if he disagrees with previous analysis for example). Very good for serious chess players. Amateurs may wish there were more historical photos included in it.

Here are other chess articles that may interest you: