The cello is a wonderful string instrument, and makes a great music gift idea for that special someone in your world. It’s such an amazing instrument from both orchestra and chamber music, and has even found its way into jazz, pop, and other styles. It has a great resonant tone, and it would be fun for anyone to learn - and Cecilio has made a solid addition for entry level players.

How Expensive is it to Buy a Cello?

A starter cello can generally be very expensive, even as much as $1000 for a student model. It’s very easy to pay $1000 - $5000 for a decent instrument, and that’s without getting a really expensive bow. You might find models online made by cello makers (luthiers) like Beijing, Scott Cao, Doetsch, Dunov, Eastman, Heinrich Gill, Wilhelm Klier, Wultur, Carletti, Yang Wei, Skarstad, and Wyss for prices that rival the cost of a brand new car! Some online brokers and instrument dealers have cellos that cost as much as $50K, and are not even antiques.

But for most amateurs, the Cecilio CCO-100 4/4 (full size) cello is a great deal, and a heck of a bargain at its $499 list price. Many places online also regularly sell the Cecilio Cello for under $300 in an outfit set that includes the cello along with a set of strings, the bow, rosin, and a small stand.

The Basics of the Cello

In the orchestra there is the string familiy that starts with the violin, - or fiddle depending on where you are from. The violin is held in the left hand and under the chin to facilitate bowing with the right hand and a long bow. The slightly larger - and lower pitched - viola is also played this way. The cello, or violoncello, is larger still and must be played seated with the instrument held between the knees on a floor peg and over the left shoulder. The even larger bass - also known as a contrabass or double bass -- is played either standing or on a stool with the instrument also raised by a peg.

The cello has four strings tuned C - G - D - A, and has a great rich tone. The instrument can be played with the bow - which is referred to as “arco” or plucked with the fingers, which is called “pizzicato”, much like a bass player in a jazz group. The cello has had a wonderful rich library of music written for it, and even more arrangements.

So if you want to get a solid starter cello with a full set of strings, a solid bow, the rosin you need to keep the bow in good shape, a soft case for storage or travel, and a stand for your practice area, then you can’t really go wrong with the Cecilio CCO-100 Cello outfit for less than $300. As you play the instrument and decide if you really like it, you can always buy a more expensive bow, or a higher quality set of strings. If you find that the cello is a real passion for you or the gift recipient, you can always sell this instrument (or gift it to another person!), and upgrade to a more expensive cello.

They're actually more reasonably priced than you think... 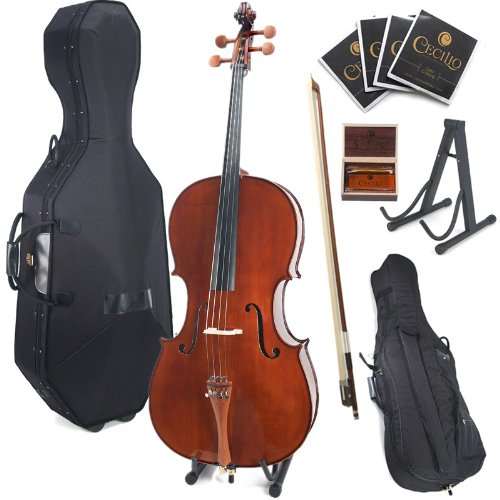 Cecilio 4/4CCO-300 Rosewood Fitted Solid Wood Cello with Hard and Soft Case, Bow, Rosin, Bridge, Strings and Stand (Full Size)Amazon Price: $799.99 $329.99 Buy Now(price as of Aug 16, 2013)
This great full size (4/4) starter cello kit from Cecilio includes the case, strings, bridge, and cello stand. This is a great way to experience this great instrument!
Next >> Learn to Love Classical Music. Find Out What Amazing Songs You May Have Been Missing!