Matthew is the author of the book Battles of the Pacific War 1941 - 1945. This is a book that covers nine of the largest land and naval battles in the Pacific Theater. For further details, check out the book's blog ( http://battlesofthepacificwar.blogspot.co.uk ), Amazon ( http://www.amazon.co.uk/Battles-Pacific-War-1941-ebook/dp/B008YDCBBQ/ref=sr_1_1?ie=UTF8&qid=1345193117&sr=8-1 ) and Lulu pages.
InfoBarrel is a writing platform for non-fiction, reference-based, informative content. Opinions expressed by InfoBarrel writers are their own.
InfoBarrel > Sports > Soccer

The Estadio Azteca stadium, in Mexico, has hosted two World Cups[1]. The 1970 and 1986 FIFA World Cups were among the greatest played. They had some terrific teams and players that lit up the Azteca.

Outside the Estadio Azteca there is a Game of the Century plaque. That game was the semifinal clash between Germany and Italy. After going a goal up in the first half, Italy led for much of the game. However, a last-minute German equalizer ensured the game went to extra-time. An enthralling extra-time period followed. Germany's Muller put them in front for the first time in the match, but minutes later the Italians were back on level terms. Riva put them 3 - 2 up before Germany's Muller scored to make it 3 - 3. A minute later Italy played the ball into the penalty box from the left, and a low strike into the back of the net put the Italians a goal ahead. The goal sealed a thrilling 4 - 3 victory for Italy.

Brazil and Italy played the 1970 final at the Azteca Stadium. After their epic semifinal victory, Italy took on Brazil's golden team. Brazil opened the scoring when Pele headed home the first, but the Italians equalized before halftime. In the second half Brazil tore Italy's defense to shreds with their incisive passing. Gerson restored their lead with little more than 20 minutes to play. As the Italians wavered, Jarizinho extended Brazil's lead. Brazil saved the best to last with a string of passes, culminating with an inch perfect ball from Pele across the Italian 18-yard box to set up the onrushing Alberto. A terrific strike sent the ball flying into Italy's net, and sealed a great 4 - 1 victory for Brazil.

In the 1986 World Cup, a rejuvenated England came up against Argentina in the quarter-finals at the Azteca Stadium. The first half of the game was a goalless one, but Argentina had most of the possession and territory. England's goalkeeper made a few saves to keep the score level at the interval. A historic second half followed. Shortly after the interval the ball fell to Maradona and the England goalkeeper. Maradona handled the ball over the keeper, and then put it into the net. As the goal was given Argentina went one up. A few minutes later Maradona scored one of the great goals. Maradona picked up the ball, dribbled past a number of England's outfield players and the keeper before scoring. A Goal of the Century plaque was later added outside the Azteca stadium. After the goals England pressed further forward. In the final 10 minutes they scored one goal. However, the score remained Argentina 2 - England 1.

This was the second final played at the Azteca. Argentina played Germany in one of the more absorbing World Cup finals. In the first half Argentina went in front after the ball was headed in from a free-kick crossed into the box. In the second half Argentina doubled their lead. However, the Germans were not quite defeated. Later in the half the Germans were given a corner-kick that they crossed into Argentina's box. A header that sent the ball into the net made the score Argentina 2 - Germany 1. The West Germans equalized from another corner-kick in the final 10 minutes. Minutes later Maradona set up Burruchaga to score the game's winning goal. As the game ended 3 - 2 Argentina lifted the trophy. They were four engrossing World Cup games played at the stadium. It is one of two stadiums that has hosted a couple of World Cup finals. 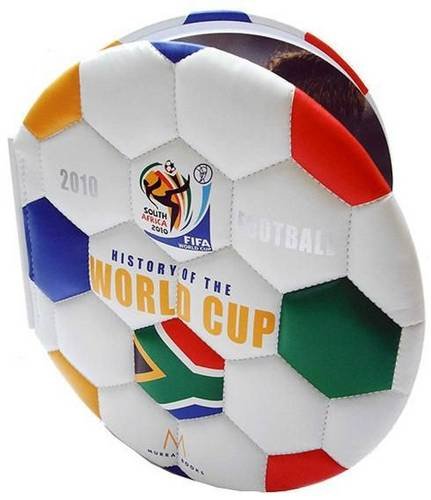