I am a Canadian Born Chinese (CBC) currently living in Canada. I became fascinated with travelling, especially doing it solo a few years back and have been hooked ever since.  You can check out my blog focusing on lifestyle improvements written from a CBC's perspective and also my journey towards location independence at CBC Survival Guide and also snag a copy of my free eBook while your at it!
InfoBarrel is a writing platform for non-fiction, reference-based, informative content. Opinions expressed by InfoBarrel writers are their own.
InfoBarrel > Lifestyle > Dating & Relationships

Guide on How to Overcome Shyness

All throughout my life, I have been shy. I remember when I was a little boy, I was terrified of putting up my hand to ask questions in class because I didn’t want the attention of the entire class focused on me. So, instead of asking questions to clarify concepts I did not understand, I ended up not asking at all or waiting until the end of class. As a result of this, I didn’t do quite as well in school as I had hoped. This shyness also transferred over into my dating life. In the past when I saw an attractive girl and we made eye contact, I would always look away immediately, instead of looking back at her confidently. I even did this when the girl smiled back at me. They probably thought I wasn’t interested in them when in fact it couldn’t have been further from the truth.

Needless to say I probably lost out on several potential dating opportunities due to shyness. It reached a point when I just say enough was enough. I had it with being shy and having it prevent me from achieving success in my life so I set out on a journey of combatting my shyness and to bring myself outside of my shell. I wanted others to see the real me that only my family and close friends saw. The charismatic and charming me, not the shy quiet introvert me. It was a tough battle to endure, but slowly I saw progress and improvements in myself after experimenting with different things. I have developed several strategies that have helped me overcome shyness and perhaps it can do the same for you.

When I was initially trying to overcome my shyness I tried out toastmasters and also joined one of my universities public speaking club. I ended up opting to stay with my universities club in the end because it was free and also because their program was more suited for me.

There are loads of public speaking clubs out there such as toastmasters where you can practice speaking in front of a live audience without fear of being judged or laughed at. When you first start out, it will be nerve wrecking. You won’t know anyone there and there will be quite a sizeable audience that you will have to speak in front of, but that’s ok. You will become more comfortable speaking in front of strangers over time, especially with the support you receive from others in these public speaking clubs.

This is also something I dabbled with on my journey towards overcoming my shyness. Let me just say, it was probably one of the best decisions I have ever made. When I first heard about improv comedy classes, I was thinking what the hell is that? Several authority figures suggested that I give improv comedy a try, and so I heeded their advice and decided to get my feet wet in improv comedy. I signed up for a drop in class at one of the popular improv comedy schools in my area after doing some research and ended up having a blast. I was hooked after that first drop in lesson and kept on coming back for more each week. During the improv comedy classes, you learn to play games that forces you to get out of your head and to just say and do things that come naturally to you. You will also be encouraged to come out and perform skits in front of the class or a live audience. I found it quite therapeutic as well.

I used to be terrible at maintaining eye contact when I was talking to people. I actually had a few people tell me that I should look at them when I was talking to them because they thought I was being rude when in fact it was because I was shy. When you look at someone when you’re talking to them, it conveys confidence and that you’re being attentive towards them. It shows respect towards the person and makes you a more likeable person. I want you to try practicing maintaining eye contact when you’re talking to someone, especially if they make you feel uncomfortable. The more uncomfortable you feel looking at them, the better. Now obviously you don’t want to just continue staring at them so look away once in a while to show them that you’re a normal person. Start off small by trying to maintain eye contact for 5 seconds and slowly work your way to 10 seconds, 20 seconds, and so on until you no longer feel that uneasiness about looking at someone in the eye.

Shy people tend to usually exhibit slouched postures with their heads down and their shoulders rounded like a hunchback. Instead, try standing tall and upright looking straight ahead. You can try imagining there being a string that runs in the centre of you that you can try pulling up to straighten yourself. Also, try puffing up your chest a little bit. At first it will feel awkward and weird, but overtime it will become natural and second nature for you to walk like this. You will start notice that your aren’t as shy as before.

5. Strike up Conversations with Strangers

Definitely not for the faint hearted, but if you want to get over your shyness, boy does this help accelerate the process. When starting out, I recommend you try striking up conversations with store employees first. Try to get the employees out of auto-pilot mode where they ask you how you are or whether or not they can help you. Instead, try to find out some information about the employee. Once you’ve become comfortable with this, try striking up conversations with strangers. If it’s too intimidating for you, you can just practice saying hi to several people first. Some of them may ignore or give you a dirty look, but that’s ok. You’re not doing this to get a reaction out of them, but rather to demonstrate to yourself that it isn’t as bad as you thought it would be. If you’re comfortable with saying hi to strangers then now’s the time to step it up and have a normal conversation with them. Overtime you will find that it gets easier and easier and also that your social skills have improved.

The point of doing all of these exercises is to put yourself in uncomfortable situations and to do that repeatedly over an extended period of time so that you become acclimatized to these environments and situations. It also teaches you to stop being so self-critical of yourself to help you get out of your head and into the present moment. When you realize that there is really no need to be shy and that you aren’t being judged nearly as badly as you thought, you will slowly shed your shyness and become the more confident true version of yourself. 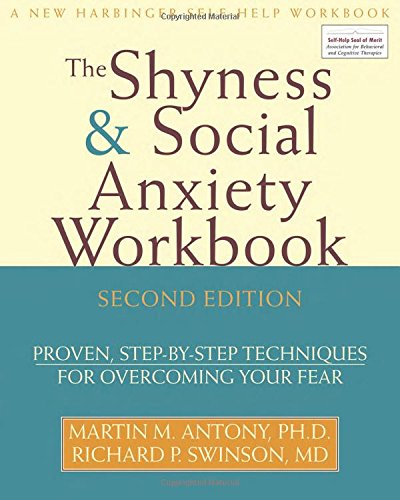 Shyness and Social Anxiety Workbook: Proven, Step-by-Step Techniques for Overcoming your Fear Amazon Price: $24.95 $13.83 Buy Now(price as of Nov 5, 2015)
Here is a great book that provides several proven techniques for overcoming shyness.
Next >> How to Infuriate Professional Musicians