The European hake is a fish which comes from the same family as the Atlantic cod. It is found in the waters of the Atlantic Ocean and the Mediterranean Sea. It is a hugely popular eating fish in Spain so this dish has a very deliberate Spanish theme. Hake can sometimes be difficult to get hold of or can be pretty expensive where it is available. Although its beautiful texture and taste does make it worth paying that little bit extra for, any firm, white fleshed fish such as cod, haddock or pollack/pollock could very effectively be used instead and cooked in exactly the same way.

Chorizo is a type of heavily spiced pork sausage which originated in Spain. It is usually smoked and cured or fermented, therefore it is bought ready to eat without any further cooking. That is the type used in this recipe. It should be noted however that sometimes a variety of chorizo can be bought which does require to be cooked and the instructions on the pack or those provided in store would have to be followed prior to and in addition to the procedures described below.

The potato firstly has to be cooked by boiling it in water. Peel the potato and chop to around three-quarter inch chunks. Add to a large pot of cold water and season with a little salt. Put the pot on to a high heat until the water begins to simmer. Reduce the heat to low to medium and maintain a moderate simmer for about twenty minutes or until the potato pieces are just starting to soften. Drain at your sink through a colander and leave the potatoes to steam off for a few minutes before covering them and allowing them to cool completely. Twenty minutes to half an hour maximum should see the pieces fully cooled.

Wash the green beans and trim at each end. Cut them in to approximately one inch strips.

Pour a couple of tablespoons of olive oil in to a small non-stick frying pan and put the pan on to a medium heat. While I would never normally use olive oil for frying fish, I felt it was necessary here to keep with the Spanish theme of the dish. Sunflower or vegetable oil would be perfect to use instead in this instance.

Scatter the flour on a plate. Season with the paprika, some salt and pepper. Use a fork to carefully stir the seasoning through the flour. Pat the hake fillet in the flour on both sides before gently and carefully shaking off any excess.

Lay the hake fillet carefully in the heated pan. It should take around four to five minutes on each side to fry over a low to medium heat.

Hake fillet is turned to fry on second side

A fish slice or large spatula should be used to turn the hake fillet on to its second side. Immediately after you have done so, pour some olive oil in to a second, slightly larger frying pan. In this instance, it really does need to be olive oil for the correct effect. Put the pan on to a medium heat for a minute or so to fully warm the oil through. 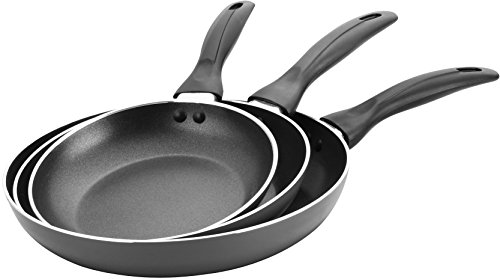 Utopia Kitchen Professional Oven Safe Nonstick 8-Inch 9.5-Inch 11-Inch Fry Pan / Frying pan Cookware Set, Dishwasher Safe, 3-Piece (Grey) Amazon Price: Buy Now(price as of Feb 26, 2016)
Recipes calling for the simultaneous use of more than one frying pan can often leave people with a major problem in that they only have one frying pan in the house. If you are in this position, the next time your pan requires replacing, why not replace it with a set? This can be an extremely budget friendly way of granting you access to recipes you have had to pass over before and very often allows you to purchase three pans for little more than the price of one!

Add the potato pieces and green beans only in the first instance to the heated olive oil. Note that the oil does have to be hot or the potato will start to soak it up rather than fry. Stir fry using a wooden spoon or spatula for a couple of minutes.

Add the chorizo slices to the sauteed potato and beans. A little extra black pepper by way of seasoning is optional. Stir fry for one final minute, essentially just to heat the already cooked chorizo all the way through.

When the hake fillet is ready, use your fish slice or spatula to lift it up from the surface of the pan but continue to hold it suspended over the pan for about twenty to thirty seconds. This will allow any excess oil to run back in to the pan and prevent the fish being served too oily/greasy. After this time, lay it down on one side of a serving plate.

A slotted spoon is best used to plate the chorizo, potato and green bean salad. As with the hake, hold each spoonful suspended over the pan for a few seconds before plating to drain off the excess oil.

Tucking in to hake fillet with warm chorizo, potato and green bean salad

Garnish the dish with the freshly chopped parsley and serve immediately, perhaps with a glass of chilled Spanish white wine or a bottle of ice cold Spanish beer.