This week, my man-servant brought home some ham steaks. He thought it'd be a nice change from all the holiday fare.

I've never been keen on ham with pineapple rings and maraschino cherries. Especially, after I found out those cherries are bleached in a solution containing calcium chloride and sulfur dioxide. And to add that unnatural, neon red colour, they are soaked in a dye known as FD&C Red 40 (along with corn syrup or other sugars).[1] Blah.

My mother almost always served ham with mustard. But it wasn't gourmet fancy mustard, just that bright yellow stuff that came out of a squeeze bottle. The thing is, plenty of mustards and maraschino cherries contain sulfites[2] and my man-servant is allergic to sulfites.

I just can't have him feeling unwell, I mean, I would need to actually do some physical work around here.

And to tell you the truth, mustard can be overpowering. It's a taste that keeps on giving, if you use too much. I could taste mustard for three days after eating my mother's ham.

The Inspiration and Tweaks

If there's one place I love to visit, it's my local LCBO (Liquor Control Board of Ontario). Every season, they put out a fabulous free Food & Drink magazine in their stores. If I miss the latest copy (or they are all snapped up), I check out their recipes online.

In the 2006 holiday edition, Jennifer McLagan posted a recipe for ham steak with port and cinnamon glaze.[3] I switched out the honey and used maple syrup instead. Also, I didn't have dark brown sugar, I had Lantic brilliant yellow sugar. I figured the maple syrup would give this glaze an earthier Canadian taste. And it did, so I thought I'd share it with you.

Credit: Dominic Lockyer on flickr / Licensed under Creative Commons Attribution 2.0 GenericPreheat oven to 350 - 375 F (176 - 190 C). Note: The original recipe called for 425 F (220 C) but I found that too high. Perhaps the ham steaks used were thicker (it didn't specify).
In a small saucepan, over medium heat, combine port, maple syrup, sugar, lemon juice, and cinnamon. Stir to dissolve the sugar and bring to a boil. Boil the glaze for 3 minutes (set a timer) and stir it often during this time. Turn off heat and set aside.
In a large baking dish (I use my largest Pyrex 3-quart casserole dish), arrange the ham slices so they are slightly overlapping each other. Then, pour the port-cinnamon-maple glaze over them.
Bake for 8 - 10 minutes, then baste the ham slices with the glaze (I just use a large spoon) and allow to bake another 10 - 15 minutes. The ham should be browned and the glaze should be bubbling.
Allow to rest a few minutes and serve with a side of gluten-free scallop potatoes or mashed potatoes and sweet peas. 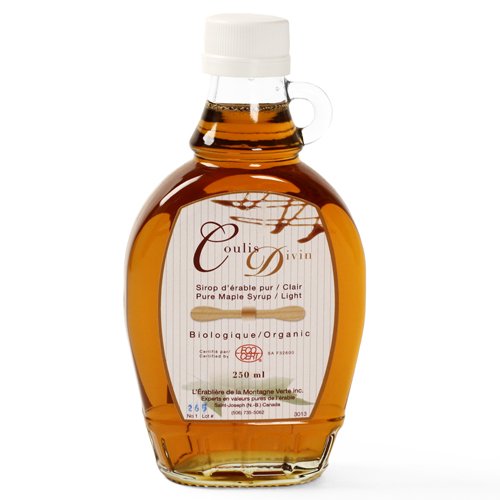 Organic Maple Syrup from New Brunswick by Coulis Divin (250 ml) Amazon Price: $9.99 Buy Now(price as of Dec 30, 2014)
Apparently, it takes 40 litres (about 10.5 gallons) of sap to produce just one litre (4.2 cups) of this gorgeous syrup. I've had maple syrup all my life and I was given Coulis Divin as a gift. It's velvet smooth, light woodsy flavour makes it ideal for all kinds of culinary applications.
Next >> 6 Make-Ahead Lunches That Aren't Pretentious Health Food