As well as being an avid writer, I am also an enthusiastic gamer, anime fan, movie buff, and love of all things strange. Being as I live with a boyfriend, I am also particularly knowledgeable about cleaning and cooking. You can join me in my adventure of writing for money here at Infobarrel. Sign Up today! Also, I wrote a book! Check out The Guild today!
InfoBarrel is a writing platform for non-fiction, reference-based, informative content. Opinions expressed by InfoBarrel writers are their own.
InfoBarrel > History > Medieval History

Harald Hardrada is best known for his failed attempt to conquer England in 1066, which resulted in his death. That event was largely considered to be the end of the Viking era, though Viking kings ruled long after his death. However, anyone familiar with Scandinavian history will know that the term "Viking" is more of a job title and not the name of the people. However, Harald Hardrada led quite the adventurous life before his claim to fame, and that is by Viking standards, who generally got around to a few places. Harald Hardrada was born Harald Sigurdsson, and was the youngest of King Olaf II of Norway's three half-brothers. When he ascended the throne as King Harald III of Norway, he picked up the moniker of Hardrada which translates to "hard rule."

There is not much information preserved about Harald's young life. However, Snorri Sturluson, a Icelandic historian of the 12th and 13th century, does record most of the information known about him in his chronicle of Norwegian kings called Heimskringla.

This book records that he was the youngest son of King Olaf II's mother Asta Gudbrandsdatter and her second husband Sigurd Syr, who was a minor lord in the south of Norway. Harald is described as a brave child in one particular event where he was taken to meet King Olaf II along with his half-brothers Guthorm and Halfdan. The other boys, though older, were described as scared of the mighty king. However, Harald met the King's stare and when the king pulled his hair, he in return pulled Olaf's hair back.

In 1028, King Olaf II was exiled to Russia after Danish king Cnut the Great seized the throne. However, he plotted his return in 1030. When Harald got word of his half-brother's return, he rallied 600 men and rode to meet his forces in Eastern Norway.

Harald and Olaf would ride to meet Cnut's forces at the Battle of Stiklestad. Olaf was hesitant about letting Harald go to battle with him, as he was only 15 at the time. However, Harald insisted and Olaf eventually gave in. The battle did not go well for the half brothers. Olaf was slain and Harald was badly wounded.

He was then whisked away to Sweden and then Russia by Rognvald Brusason, one of King Olaf's staunchest supporters.

In Russia then Byzantine

In Russia, Harald Hardrada came under the employ of King Yaroslav, where he would remain for several years. He would then move onto Constantinople to serve the Byzantine emperor. Historians debate the reason as to why he left Russia for Constantinople, however most believe that he wanted to marry Yaroslav's daughter Ellisiv, but had to leave an prove himself through great feats first. This theory is supported by his later return and marriage of Ellisiv.

Upon Harald Hardrada's arrival in Constantinople, he took up working for Empress Zoe and her husband Michael Katalaktes, in the process joining the navy there. Harald was instantly liked by a group of Scandinavian mercenaries called the Varangians, who were also under the employ of the Empress. They liked him enough, that he eventually became their leader. Though the mercenaries were hired by Empress Zoe, they were largely under the command of a Greek general named Georgios Maniaces. However, once Harald took charge, the Varangians acted more as an independent force, which grated relations between Georgios Maniaces and Harald Hardrada.

Maniaces took his insubordination rather well, mostly because of Harald's success on the battlefield. At some point during his career, he entered what they called "Serkland", which is thought to be Africa or Asian Minor. There he took control of eighty cities. However, historians find that eighty is often used in place of "a lot of cities." He was apparently infamous for using clever tricks to gain access to the cities, then ravaging them from the inside. For example, using birds with flaming brands lashed to their back as a misdirect or pretending to be dead to gain access to a city. Most historians believe this to be myths, as Sturluson does not provide locations or dates for these battles. The tactics have also be used for other warriors from that time.

Harald went on his merry way pillaging as Vikings do for several years before Empress Zoe's husband Michael Katalaktes died and appointed his adoptive son Michael V as ruler. Michael V disliked the Varangians, which led to the imprisonment of Harald on the charges of misappropriating the spoils of his conquests. Harald would escape from prison in 1042 after the citizens rebelled against Michael V after his exile of Empress Zoe.

After that Harald Hardrada left Byzantine, even though he was told not to, returned to Russia, and married Ellisiv.

In Harald's absence, the throne of Norway had been restored to his family line. Now Olaf II's bastard son Magnus the Good sat the throne. Harald felt his claim was stronger and thus challenged Magnus to arms. Magnus's advisors felt that going to arms with his uncle would be deadly for Magnus so instead the hammered out a compromise. The two would jointly rule Norway.

This did not last even a year, Magnus became ill and died. Because of the circumstances, most historians suspect that Harald poisoned the young King in some way, which is possible. On his deathbed, Magnus bequeathed the throne of Norway to Harald and the throne of Denmark, which had come under his control after the death of Cnut the Greats' son, to Svein Ulfsson, who was nephew to Cnut the Great.

But you know those darn Vikings, if they can't have it all, they'll die trying. Just having Norway wasn't enough for Harald Hardrada, what with Denmark dangling just right over there. However, he found it hard to garner support for a campaign against the Danes. Mostly because an earl named Einar Thambarskelfir blocked his every advance. So Harald had him killed, which hurt his image a little but he did get the support against the Danes he wanted.

After 15 years of an unsuccessful war, Harald made peace with Svein Ulfsson. However, because the war was so unpopular at home, Harald had several districts that were on the verge of rebelling. Mostly, they withheld taxes to protest the war. He treated this as he treated all his other diplomatic adversaries—with a display of brute force. Maiming or killing farmers, seizing their property, the usual stuff.

Since he couldn't have Denmark, Hardrada set his eyes on England. He based his claim on the throne due to an (arguably fake) agreement between Magnus and Cnut's son Harthecnut. The agreement said that if the other died, they had claims on the deceased's lands. Harthecnut ruled England briefly in the early 1040's, so in Harald's mind he found this agreement still valid.

It was there that Harald Hardrada would find himself greatly outnumbered on the shores. His brief invasion resulted in his death during the Battle of Stamford Bridge by Harold Godwinson (or King Harold II as he was then known). When the Norwegians retreated, they could only man 25 of the 300 ships they had brought with them. This was a sad, but honorable end to one of the most adventurous Vikings that ever lived. 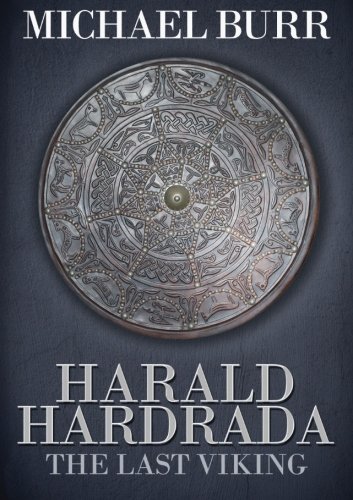