Just As Good As a Man

This is the final installment of Hatshepsut: Queen of the Pharaohs. Parts 1-4 are available if you missed them.

One curious thing about Hatshepsut’s reign, is how she presented herself to the public in statues. Only the smallest fraction of the Egyptian citizenry would ever had seen Hatshepsut in person. For most of them, the only real glimpse of what she looked like would come from statues of her. Curiously, she often chose to present herself in a masculine way. She wanted the public to think she was just as good as a man. She had her statues depicted, first of all, as a female ruler who was very respectable and in a ladylike position. Then, she changed bits and pieces on the statue representations over the years until, gradually, she was completely dressed as a man with a male beard, a male kilt, no breasts, a male-looking face, and so on. It’s hard to say whether she wanted the common people to think of her as male because we don’t know what she really thought about that issue. But she certainly did want them to have the impression that she was as good as a male Pharaoh in every respect, including the way in which she was depicted.

This awareness of image also presented itself in other ways. She seemed to know the importance of a ruler having a sense of adventure. One of the crowning accomplishments of her reign was sending an expedition to the distant land of Punt. Traveling to Punt was something few Egyptians had ever done. There’s some question as to where it was exactly located but it may have been along the Ethiopian coast or perhaps the present area of Somalia. They sought to bring back treasures to the Land of the Gods, including things like panther skins, ivory, and in particular Myrrh trees that could be planted in the temples of Amen-Ra.

Scenes of the great expeditions are carved on her temple walls. Perhaps, like any great leader, she knew the glory that would come from a successful expedition. Success follows success. Yet, always maturing was the ever-present Thutmose III. What was he doing all this time? What did he think of her? When, if ever, would she step aside and let him take his rightful place on the throne? She held onto power long after he came of age to rule in his own right. How she did it is one of the biggest mysteries in archaeology. It may have had something to do with her personality as a strong human being and also probably with machinations and cabals within the court itself, which we have no record whatsoever.

Then, suddenly, Hatshepsut was gone. The woman who became Pharaoh also became of the great disappearing acts of history. How she died and what happened to her body are two of the major mysteries of modern archaeology. At around 22 years into her reign, we suddenly find Thutmose III on the throne of Egypt and Hatshepsut nowhere to be found. The Egyptians, of course, knew what happened to her but we don’t. It probably was a natural death and we have no evidence to indicate otherwise. Among the mummies of the royal cache that was discovered about 100 years ago on the west bank of Thebes, there are none that can be shown to be hers. So we don’t really know what happened to her mummy. Whether it was left to lie in state or whether it was desecrated or whether it was moved and preserved somewhere else.

The records we do have show Thutmose III taking over and going on to great glory. One past historian has likened him to a Napoleon, not only because of his military conquests but because his mummy is fairly short. He must have been a very active person and a great campaigner once he was on the throne of Egypt. He records almost annual campaigns from his 23rd until his 42nd reigning year. The reason we’ve been left in the dark about Hatshepsut’s demise and death is that most of the ancient records concerning her seemed to have been methodically destroyed. Because of this, Egyptologists have been left with some huge gaps of evidence in solving the mystery of the Queen of the Pharaohs. Besides of not being sure how she died, we’re also not sure of how she fell from power. Was she murdered? Was she pushed aside in a palace coup? And why all the effort to erase her name from history? 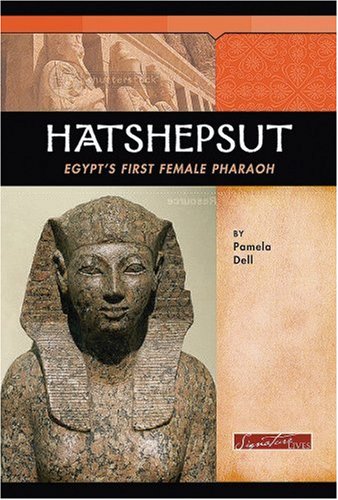 The traditional story is that immediately after her death an army of enemies, perhaps instigated by Thutmose III, descended upon everything that bore her name and likeness and destroyed it. Thutmose was furious that this mere woman had dared to usurp his throne for so many years and the time had now come for a payback. The statues and reliefs in her temple were destroyed, some of them were beheaded, others were bashed in. The tomb where she was supposed to be buried was ransacked and her body may have been removed at the same time. At Karnak, her name and image were methodically chiseled from the walls. This was the ancient equivalent of book burning in modern times or erasing tape. By eliminating her image and name her enemies felt that they could also eliminate her memory. The old theory was that Thutmose III’s anger knew no bounds. His hatred of Hatshepsut was all-encompassing.

Yet, recent discoveries have forced a revision in this long held belief. What archaeologists have turned up only adds more mystery to the case. Yes, her image was destroyed but it may have been nearly 20 years after the estimated time of her death. Why would Thutmose III wait so long to vent his anger? The meticulous study of temple wall inscriptions and the dating of construction projects has forced a reassessment of the old historical perspective.

One new theory on Hatshepsut presents, possibly, a less hostile relationship between her and Thutmose III but an extremely sexist one. Some scholars are now starting to think that the obliteration of her name was fueled by something more than immediate personal revenge on the part of Thutmose III. More than revenge, he may have felt the need to rewrite history. Because it now appears he didn’t start to attack her memory until over 20 years after her death, it may be that he decided at that time that there was a need to set history right from a traditional male point of view. To put her in her place, so to speak, for all of eternity.

Rewriting History and Return From Oblivion

The first thing he had to do was eliminate her version of history so he could write his own, therefore, all the destruction. This rewriting of history may have also involved more Pharaohs than Thutmose III. Some of the other Pharaohs who followed him even went so far as to eliminate her name from the official King Lists. These King Lists were made up during various periods in history and reflect certain prejudices or trends of the time. We really don’t know why she was left off the lists. We can only speculate that it may be some misogynist, anti-female Pharaoh leanings or it may have been the idea that she wasn’t really a King.

At this time we simply cannot tell because the records about Hatshepsut are contradictory. She may have grabbed the throne and led the country with great skill, but in the end, old ways of viewing women died hard. It was believed that women were not really considered to be the most appropriate people to rule Egypt and women were not held in high esteem. Mothers of King’s were held in high esteem as long as these women kept their place, they were given respect and they were looked after. Experts believe were instructions given to men from the earliest times in ancient Egypt.

Ironically, the last laugh may be Hatshepsut’s because, during the 20th century, many artifacts from her reign have been unearthed. In 1922, a New York Metropolitan of Art dig in Egypt began unearthing numerous Hatshepsut statues that had been mutilated and buried in a mass grave. With meticulous efficiency, the statues were pieced back together. The result is, her name and likeness is alive and well and has traveled far from the Nile Valley. Today, her representations are prominently displayed in the fabulous Hatshepsut Gallery at the museum in New York City. In a way it’s only fitting. The discovery of the statues has allowed her to defy time itself. While she was alive, she seemed to defy all the odds and even now, in death, after they tried to bury her legacy forever she has returned from oblivion.