Her name was Hatshepsut. Over 3,000 years ago she did the unthinkable when she defied convention and had herself crowned a Pharaoh of male-dominated Egypt. This daring power play brought her control of the richest and most powerful country on earth. She was a woman who played by her own rules. Did she defy convention again and take a common man as her lover? What was it in her personality that inspired such loyalty and devotion in some, and such fear and loathing in others? In the end, she may have gone too far because the male leaders who followed did everything in their power to obliterate her name from history. What sin could she have possibly committed to fuel such hatred?

A Woman of Mystery

Who was Hatshepsut? She’s been called the first great woman in history. She might also be called history’s first great woman of mystery. So much effort was made to erase her name from history after her death that tracing her life of 3,000 years ago has become a great detective story, one where archaeology and history meet. This much we do know: Her power play was so daring and the stakes were exceptionally high. Ancient Egypt during the 18th dynasty was at it’s absolute zenith and it’s influence stretched all the way to Babylon. The prize of Egypt included the world’s strongest army, richest economy, and the eternal Nile.

Once on the throne, she was not a token Pharaoh. Instead, she blossomed into a great monarch. In the infinite history of ancient Egypt, her name is consistently mentioned as one of it’s greatest leaders. When Hatshepsut grabbed the throne of Egypt she also entered into the most exclusive men’s clubs in the world, Egypt’s religious hierarchy. As Pharaoh, she was allowed into the innermost sanctums of their religious cults. With the High Priest of the nation and his attendants, she worshipped the God Amen-Ra in ceremonies few other women had ever seen. Her hand was everywhere across the land. Standing high above the mighty temple of Karnak is Hatshepsut’s obelisk, the tallest one in the temple.

As a Pharaoh, she claimed to be a deity herself and this obelisk is symbolic of her relationship to the Sun Gods. Across the Nile is her temple, one of the most beautiful structures in Egypt and one of the most unique buildings in all antiquity. Most of the male Pharaohs built with strength in mind, like the great pyramids. Hatshepsut’s temple is different. It has a subdued, elegant quality to it not often seen in Egyptian monuments. Even more intriguing is what lies close by this temple. Archeologists have found the tomb whose entrance is off to the side. Once opened, a passageway leads hundreds of feet underground. At the end of the entrance is the tomb of a man named Senenmut. He was a common man often rumored to be her lover.

Was theirs one of the great love affairs in history? Did she defy everyone and break all the rules to have this man? Did she scandalize her country with this affair of the heart? Did Hatshepsut grant permission for this man’s tomb to be dug here so they could be close together, even in eternity? This is a great mystery. But perhaps even more intriguing is how she held onto her power. Breathing down her neck was one of Egypt’s most ambitious warrior-Pharaoh- to-be: Thutmose III, often called the Napoleon of Egypt. Thutmose III was her nephew and the person she pushed aside when she claimed the throne for her own. What power did she wield over him to keep him at bay for what some scholars think was a period of over 20 years? Armies couldn’t stop him, empires fell to his sword but this small woman kept him under her thumb. How did she do it? 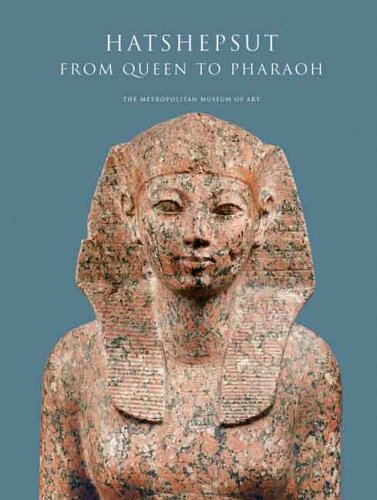 Hatshepsut: From Queen to Pharaoh (Metropolitan Museum of Art Series)Amazon Price: $65.00 $40.00 Buy Now(price as of Oct 11, 2013)
The forgotten rule of the princess who would be king is displayed in vivid color photographs taken from the archaeological remains of her reign.

The ultimate mystery, though, is what became of her. As Pharaoh, she was the most visible person on the planet, the most famous person in the world. Yet, scholars are at a loss as to how she died and what happened to her body. She had several tombs constructed for her burial, yet they're completely empty today. The bodies of other Egyptian leaders have come down to us in the form of mummies. Until recently, there was no officially verified record of her mummy. Did enemies dispose of her body in an act of vengeance? Just as shocking are the attacks on her name and her image. At her temple, her statues were beheaded and mutilated beyond recognition.Archeologists have found a huge dumping ground where it seems every statue that could be found of her was rounded up, smashed, and buried in a mass grave. All over Egypt her name was erased from official records. At the temple of Karnak, someone went to a great deal of trouble of hacking out her image bit by bit from the temple walls. What could have inspired this hatred? Who went to all this trouble? Political enemies? Jealous males? A conservative society intent on putting a headstrong woman in her place? Whatever the case, they failed. Archeologists have unearthed enough evidence to, at least, partially tell her story, the pieces of the puzzle are coming together, and the mystery is coming into focus.  Continue to part 2 of Hatshepsut: King of Pharaohs.