Heartburn in Dogs - Causes and Treatment of Canine Acid Reflux

If your dog is anything like my little black Puggle, you may notice that sometimes when they are sitting quietly they will let out a little burp before promptly licking furiously at the air and going back to what they were doing. This may seem like just another strange dog behavior, but it can actually be a sign of something serious if left unchecked for long periods of time - acid reflux. While acid reflux may seem like a "people disease" that comes after eating half a pizza before bed, many dogs experience a similar problem (without the pizza, usually). Like with people, the sphincters that connects the stomach and the esophagus loosens, letting out gastric or intestinal fluids that travel upwards until they are expelled or gulped back down.

Symptoms of Acid Reflux in Dogs

Acid reflux, or gastroesophageal reflux as it is called by more eloquent veterinarians, is actually quite common in dogs. It is often easily treatable at home without veterinary intervention, but more serious cases can be cause for concern.

For dogs with frequent reflux, the gastric juices can lead to erosion of the protective mucus lining in a their throat. Once a good portion of it has been worn away, esophagitis sets in that can cause inflammation and eventually ulcers in the esophagus that cause pain and difficulty swallowing.

Typical symptoms of acid reflux in dogs include spitting up food or yellowish bile if the stomach is empty. As the erosion of the protective mucus continues, worse symptoms back occur such as whining when they eat or swallow, a loss of appetite, and eventual weight loss.

But when is it time to worry?

Once a dog starts exhibiting pain when swallowing is the ideal time to head to veterinarian, but if the signs go unnoticed the symptoms of extreme esophagitis include fever from the inflammation and extreme salivation due to the pain caused by swallowing.

Causes of Acid Reflux in Dogs

For some dogs, like mine, gastroesophageal reflux is caused by a congenital defect known as a hiatal hernia. Specifically, a hiatal hernia occurs when a portion of the stomach near where the esophagus meets the stomach is pushed into the diaphragm. This causes the sphincter to open at an odd angle and lets gastric juices flow out easier. This can require surgery to fix, but the symptoms it causes can also be controlled the same way many treat the acid reflux. Although congenital in most dogs who have one, a hiatal hernia can also be caused by significant trauma to young dogs.

However, for some dogs, the reflux may only be temporary. The symptoms may occur after a dog has undergone anesthetic for surgery or other procedures, the anesthetic causes the stomach sphincter to relax and if a dog has failed to fast properly before surgery or was improperly placed, they may experience symptoms for days afterwards.

While all dogs can have it happen, puppies or younger dogs are more at risk due to the still-developing sphincter. This makes the occasional bout of vomiting a possibility, worrying many new pet parents unnecessarily. 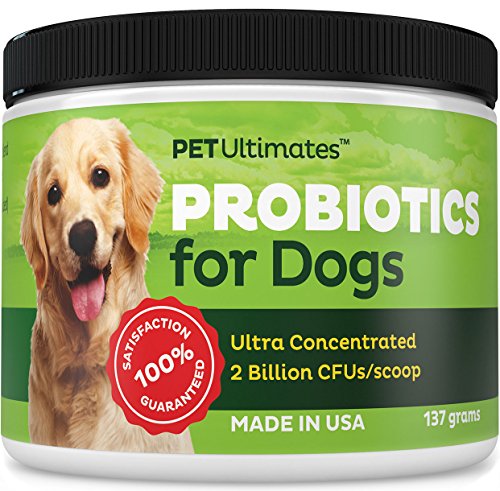 Pet Ultimates Probiotics for Dogs, 137 grams Amazon Price: $69.95 $35.95 Buy Now(price as of Dec 2, 2015)
When I talked to my veterinarian about this issue with my dog, they recommended ID Gastrointestinal dog food that comes in both wet and dry varieties as well as giving him yogurt or a probiotic supplement to help with digestion.

Treatment of Acid Reflux in Dogs

Most treatment for reflux is done at home, and when caught early, has great success. The most recommended treatment requires just a simple altered diet. Dogs must first fast for two days before being put on small low fat, low protein meals that are given at frequent intervals. While most dog owners are all about high protein dog foods these days as a more natural way of feeding their dog, the high grain formula of other dog food brands will help limit stomach acid.

When a dog is fed dietary protein, it stimulates the secretion of gastric acid that can lead to excess. Similarly, high fat meals cause the stomach sphincter to because weaker and more slippery. When combined with each other, it spells some major heart burn. However, both protein and fat are needed for a healthy dog, so while owners should limit it, it should not be cut out all together. This is usually a non-issue in store bought dog food, but pet owners who make their own dog food need to be sure their dogs still get proper nutrition.

Medication is another route, but while a veterinarian may prescribe something for the short term to treat any inflammation and pain, many vets will advise against a long term regimen. To treat acid reflux in dogs, most vets will prescribe gastric acid inhibitors or blockers as well as esophageal and gastric coating agents to help ease the strain on the protective mucus coating. If they find any inflammation, ulcers, or a fever is present, your dog may also be put on a sturdy round of antibiotics.

In severe cases, a dog will need nutritional support via feeding tubes and intravenous fluids due to their inability to eat on their own.

Regardless of medication, veterinarians will still recommend changing your their diet to prevent the issue from getting worse or reoccurring.

The day-to-day regime of treating acid reflux in their pet takes some getting used to, but owners will fall in line soon enough. Instead of one or two big meals a day, owners will want to switch to three or four small meals based on feeding recommendations for your dog's weight.

While the low protein, low fat diet means that wet dog food is almost completely eliminated for your dog's diet (since wet food is high in both) unless otherwise marked, one of the most important restrictions is people food. Certain vegetables like broccoli or green beans are fine, but most people food (even if it is grain-based) is not a good idea for your dog's sensitive stomach. 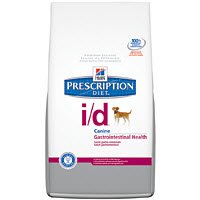 Hill's Prescription Diet I/D Gastrointestinal Health Dry Dog Food 8.5 Pounds Amazon Price: $44.99 Buy Now(price as of Dec 2, 2015)
When I talked to my veterinarian about this issue with my dog, they recommended ID Gastrointestinal dog food that comes in both wet and dry varieties as well as giving him yogurt or a probiotic supplement to help with digestion.
Next >> Doggy Play Pen - Keep Your Puppy Safe - Give Yourself a Break!