J.Larson Check out my blog the Young Enviromentalist for more on what makes me tick & toc and follow along in my quest to live a more sustainable life http://youngenviromentalist.blogspot.com See you there
InfoBarrel is a writing platform for non-fiction, reference-based, informative content. Opinions expressed by InfoBarrel writers are their own.
InfoBarrel > Entertainment > Books & Comics

Warning may contain some Spoilers

Credit: personal photoHero, Second Class is by far the most interesting and unique take on the good vs evil archetype that I have ever read.  In this novel you are taken to a world of Heroes and Villians in which every stereotype is commonplace and everything is over the top.  All the Heroes have heroic names like Crimson Slash or Purple Paladin and they will charge into battle yelling things like "Now you Face Justice" and some of them will even narrate their own battles so that they can be better retold by the bards that travel the countryside.

The Villians are not any better with their dastardly plots and nefarious schemes and ridiculous names like Berrik Sawface.  Yes I said Sawface really what kind of self respecting bad guy would have a name like that.  But in the world created by the book names like that are pretty much a mandatory part of being a Villian and all the Villians have one that is equally ridiculous.

Both the Heroes and Villians are governed by there own set of rules and organizations that each one has to pay dues to and anwser to in various ways.  For example Heroes have to let their Guilde know when they go on a Quest.  Villians to must do things like get approval to sack a castle and cause "Epic Destruction".  One of my favorite examples of this is at the beginning of the book when right in the middle of a titanic battle between and Hero and a Arch Villian they are stopped by other Villians from fighting because the Arch Villian in question hasn't filed the proper paperwork for the "Epic Destruction" he is causing and that his solar eclipse is illegal because he didn't pay for it first and he already used his free one for this fiscal quarter.

Little idiosyncrasies like that pervade the book and how the author weaves them into a good vs evil story line is done in such a way that it adds what can only be described as a hilarious depth to the story.  Now into all this craziness is dropped our story protagonist who is a young hero in training that is plucked from his small island home when he shows Hero potential.  We follow along as he learns the inner workings of being a hero from his mentor and from a book called the Guide to Heroics which covers everything from sword techniques to why you have to listen to a Villians monologue when he has at his mercy.  Now all of this is new and exciting to our little Hero but you can sense that he finds a lot of this Hero stuff to be a little ridiculous but he so desperately wants to be a Hero that he just goes with it.

As you would expect in a story like this our young hero meets a damsel who most of the time needs no help when she is distress and uncovers a nefarious plot by the Villian who just might actually be more Evil than Villian and this of course lands him right in the middle of struggle that will determine the fate of the world.  For the one he faces is not really interested in just destroying a few castles and having a little Villian like fun he means to literally control the world and he is willing to do whatever he has to to win.

With the way the first book ended I cannot wait to read the next in the series and I look forward eagerly to its release.  I would highly recommend this refreshing take on good vs evil to anyone that likes to read.  It overcomes genres and styles with it unique word play and well paced witty and not so witty (but still funny) humor.  Overall a excellant read and it a deserves to be read by anyone willling to give it a go. 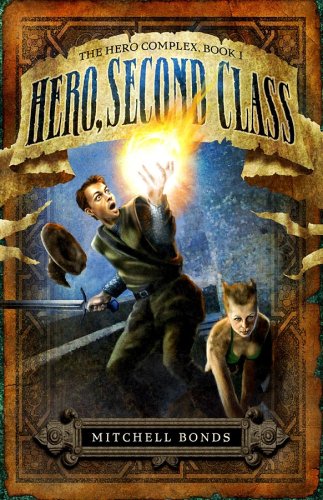