Find out more about me on my writer's webpage Check out my books on my Amazon Author Page
InfoBarrel is a writing platform for non-fiction, reference-based, informative content. Opinions expressed by InfoBarrel writers are their own.
InfoBarrel > Travel & Places > Places > United States

Ramping Up the High Line

With new construction all around the area, the High Line tops off off across the street from the Javits Center.

A ramp guides you above the West Side Highway and the Hudson River, making a big sweep into the urban hiking trail full of highlights into Chelsea.

Have you walked the High Line?

Probably not. Although millions climb up and ramble between the newest and oldest of New York each year, many millions more have only heard about it and, maybe, seen a few picture.

My intention for this article is visual. I want to show you some highlights, now that the last link in the two-mile trail has opened, that give a sense of what I love about this park and why it's become so popular.

When you walk up the ramp and enter the park, between 11th Avenue and the West Side Highway, just short of the Hudson, you're immediately at the core of what will be the last great development of idle land in Manhattan.

Hudson Yards' reincarnation as a congestion of glassy towers, one planned taller than the Empire State, has spread cranes all around the resting place of a sea of idle New Jersey Transit rail cars. It's all changing very quickly.

Note: with the single exception of an image by New York photographer Deborah Julian, all the pictures here are my own, amateur observations of place I love to walk.

How the Most Unique Park in America Happened 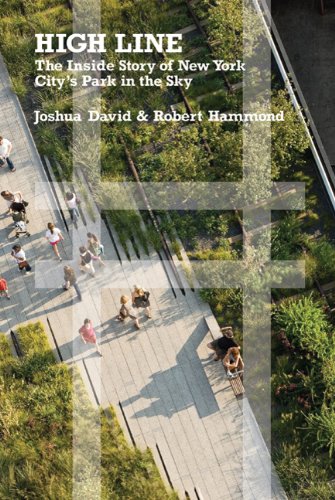 High Line: The Inside Story of New York City's Park in the Sky Amazon Price: $29.95 $10.80 Buy Now(price as of Oct 21, 2014)
Faced with a city administration that wanted to tear down the line as an eyesore that cast a shadow two miles long on the West Side, it took determination, patience and, finally, some high profile support to save the elevated line and to make it over.

The Empire State Building from the High Line

As you make your way along the High Line, from Midtown through Chelsea to TriBeCa, New York City icons come into view in proper perspective.

Already in Demand for Photo Shoots

Open only a few days, the section leading around Hudson Yards is already hot for photo shoots. This is one of four set up before the curve of the elevated trail swung around the sea of New Jersey Transit trains.

In the background, you can see some of the new construction that will change the West Side permanently.

I'm not sure what the shoots were for. I guessed ad copy, but my wife thought they looked like student projects.

Nature Takes Over an Abandoned Right of Way

The brilliant landscape architecture that makes the High Line a memorable experience hasn't hasn't been fully installed in the newest section yet.

Here's what happened to the rail bed in the decades after Conrail left the property to rust and rot.

Right along the park, transformative construction is catching up on blocks that have fallen behind the rest of Manhattan.

Where the landscape architects have been able to design and plant, you can see how the blend of industry with nature has been used along the entire two mile pathway.

The plan has been to make the High Line an easy place to visit and relax without sacrificing the beauty of designed nature. 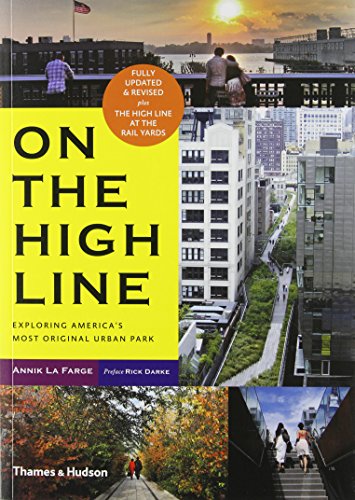 On the High Line: Exploring America's Most Original Urban Park (Revised Edition) Amazon Price: $29.95 $18.37 Buy Now(price as of Oct 21, 2014)
Take a virtual tour of High Line Park. Great if you're going and want to maximize your visit. Great also as a substitute, in case trip is out of reach for you.

A feature that makes the park a work of magic is the way it can make you feel at times that you are not in a city at all, but out on a trail. Yet, never is the busiest city in the world more than fifty feet away.

The Old City, Still There But Changing Fast

When we first move to New York, seeing the High Line as it dodged between and sometimes into buildings along the West Side intrigued me. What was it? Was it still in use?

Later, when I went far down toward the river, on a street like this one, to see customers like Martha Stewart/Omnimedia, I'd walk under the elevated tracks. It was inaccessible, like a ghost line.

Then, news stories came along about the battle to save it from the Giuliani administration's decision to tear it down, and the history of the High Line became better known.

Now, as you can see, the city administration lost and history was preserved. Not just that, butconstruction is everywhere along the right of way.

Some features you find in the park are unlike anything you're likely to see elsewhere. Among them is this viewing platform over 10th Avenue.

People watching is a popular sport in New York as it is in most cities, but where else do they set up bleachers to watch the busy urban scene, raised thirty feet above it?

A nifty place to relax or sunbathe. When the crowds are fewer, this becomes the neighborhood's back yard.

A Living Museum of Architecture

Architecture has long been a New York City attraction. Numerous buildings draw tourist for their size and originality. Walking through the park, you see the gracefully old interfaced with the strikingly new.

It hardly counts as a walk through New York City without a bit of cynical humor. so often at the expense of the Mets.

Even dressed up with artfully designed landscaping, the park's management leaves reminders that your walking through railroad history.

Spurs along the line ran into and through buildings as supplies were delivered and products loaded.

Here you see the connects that served NBC. No, not that one. It was the Nabisco Baking Company, one the world's largest of its kind.

End of the Line

Eventually, you reach 14th Street near the end of High Line Park. You'll want a break. Take a quick stroll to the 9th Avenue intersection for one of New York City's most unusual venues, Chelsea Market, with places to eat, a convenient gelato shop, an arts and crafts market and, of course, food markets.