Northeast Wisconsin is home to many nice hiking, biking and walking paths. Varying in length from a short eight miles to more than 1200 miles, these will give you a place to walk in nature, see the natural flora and fauna of Wisconsin and enjoy the outdoors in “America’s Dairyland.” Here are five trails that I have recently hiked, either completely or in part.

The shortest of the trails is the East River Trail. At eight miles, it wanders along the East River, a tributary of the Fox River. The paved path stays within the cities of Green Bay, Bellevue, Allouez and Ledgeview, and crosses though five city parks. Rest rooms are available in two parks. In the green space surrounding the trail, you may see deer, wild turkey, great blue herons, sandhill cranes and red tail hawks, all common inhabitants of the region. You can walk your dog on a leash or ride a bicycle. There is no fee to use this.

The Devil’s River Trail is one of the area’s successful “rails to trails.” A former railroad line, this path runs 14 miles between the villages of Denmark in Brown County to Rockwood in Manitowoc County. It crosses two railroad trestles over the Devil’s River and another tributary, and is smoothly graded with very little incline. This results in a simple hike. The area is home to many deer and wild turkeys. Crushed limestone covers the length, making it unsuited to skates. Hikers can use it year round, while biking is possible only during the snow-free season. Snowmobiles, snowshoes and cross-country skiing are all possible on the trail during winter. No fees are requires for any usage. The trailhead in Denmark has a shelter building and rest rooms.

Running next to the Fox River is the appropriately named Fox River Trail. There are many scenic spots along the river, as well as an outdoor fitness challenge course in one segment. You can skate on the 11 mile asphalt-covered section that begins in Green Bay; crushed limestone on the remaining 14 miles allows for hiking and biking. Dogs on leashes can walk on the entire length. In addition to the wildlife seen near the East River, the Fox River will also host bald eagles and on rare occasions, a peregrine falcon. On the unpaved section you can ride horses year-round; you can also ride snowmobiles in the winter. Wisconsin requires a State Trail Pass for skating, biking, riding, and snowmobiling.

Another Wisconsin rail to trail is the Mountain-Bay Trail, built on one line of the former Chicago and Northwestern line (whose historic former depot is now the home of Titletown Brewing Company in Green Bay.) The 83 mile railroad connected Green Bay and Wausau, running through Brown, Shawano and Marathon Counties. The path is smooth with very little incline to the grade. It runs level with the ground at times while other sections will be on trestles 20 or more feet above ground. You can ride bicycles and snow mobiles in their respective seasons and hikers can walk it year-round. Each county sets their own usage fees. The three county parks departments initially developed the trail; ongoing maintenance is by a volunteer organization.

This trail is not suited to distance (overnight) hiking. Except for the point where the hike intersects with the town of Pulaski, about 13 miles out of Green Bay, there are no campgrounds or any other service facilities. You can camp overnight in a green space near the trail in Pulaski. Contact the Pulaski Parks Department for verbal permission to set up a tent, and if you are lucky, they will relay that to the local police. (If not, as in my experience, you will get the chance to meet a police officer.) That spot in Pulaski offers rest rooms and water, but no power. After Pulaski, the only facilities you will find are a few picnic benches. There are no sources of potable water and no places to legally pitch a tent.

The greatest of the hikes is the more than 1200 mile Wisconsin Ice Age Trail (IAT). Meandering a winding path through the state, it connects Sturgeon Bay in Door County to St. Croix Falls in Polk County. The U.S. National Park Service, the Wisconsin Department of Natural Resources and the volunteer-run Ice Age Alliance cooperatively keep up the IAT. About 500 miles are complete and marked with black and yellow blazes; the remaining sections are still unmarked. The entire length wanders across national and county forests, city and state parks, and private farmland. Covering 31 counties within the state, you will seen almost any animal if you are quiet. In addition to those animals already mentioned, northern Wisconsin also is home to black bears, gray wolves, coyotes and red foxes. All four of those will be very rare to spot, unless you leaving food outside and available while camping.

Photo by Dave Meier, from Stocksnap.io, under Creative Commons 0

This trail is newer than the more well-known Appalachian Trail (AT), and does not have the same level of  on-trail camping facilities as the AT. Unlike the Mountain-Bay Trail, the IAT has sections that allow camping and water sources are available. The trail occasionally follows roadways, which brings restaurants and motels as options. Biking is only allowed when the trail coincides with state bike trails. You cannot ride horses on the IAT, nor any motorized vehicles.

As the Ice Age Trail begins the northward segment, it crosses the Mountain-Bay, but it never moves northwest far enough to intersect with the North Country Trail. These are only five hiking paths in this part of Wisconsin. Many more are found in the area and across the state. 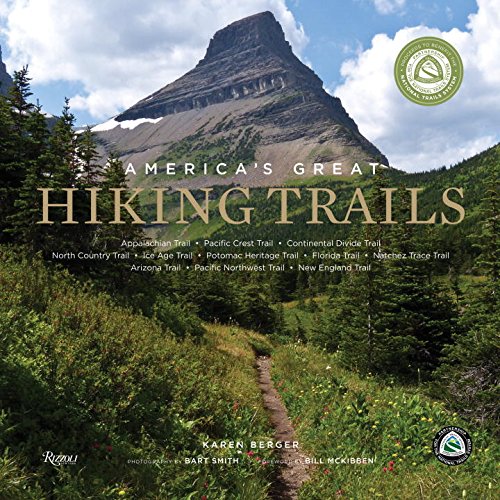