Hollywood studios have an ear to the foreign markets. Foreign markets are are a big portion of their profits and studios are aware profits might aren’t as good if the subject offends foreigners. The German market was significant, and Hollywood studios marketed movies before, and even during World War II not to offend the Nazis. Hollywood and Hitler, 1933 - 1939 and The Collaboration: Hollywood's Pact with Hitler discuss this era of movie making.

German filmmakers had influence that extended to America. In the 1920s they made movies which are used to teach aspiring filmmakers in film schools today. These included The Cabinet of Doctor Caligari, Nosferatu, Dr. Mabuse: The Gambler, and Metropolis. The movie M, is a classic made just before the start of Nazi Germany. These movies were dark and impressionistic and influenced American movie making and the was the basis of film noir.

All Quiet on the Western Front was shown in Germany in 1930. Most Germans didn’t like the way they were portrayed, and the fledgling Nazi party rioted because of it. They released white mice and set off stink bombs in theaters that showed the movie. This gave American filmmakers pause, as they realized it affected their bottom line.

Hitler understood the value of propaganda. Hitler and his Minister of Propaganda, Joseph Goebbels, managed information presented to Germans to offer a Nazi version of the world. Early in their administration they worked to include movies made in Hollywood. Movies that showed leadership such as The Lives of a Bengal Lancer, Our Daily Bread, and Mutiny on the Bounty were touted by the Propaganda Ministry as exceptional films. Hitler also praised movies that showed Democracy in a bad light, such as the 1933 movie, Gabriel Over the White House and Mr. Smith Goes to Washington.  American movies made in Hollywood were popular in the large German market and Hitler and Goebbels wanted to make certain Nazis were portrayed in a good light, and their ideals.

Hitler was a fan of American movies and showed them most nights in his home theater. His favorites were comedies such as Laurel and Hardy, and Mickey Mouse. Greta Garbo was his favorite actress. He liked westerns, but didn’t care for Tarzan. He despised Charlie Chaplin for his movie, The Great Dictator.

Hollywood and Hitler, 1933 - 1939 is a book by Thomas Doherty that examines the collaboration between American filmmakers and the Nazis. Doherty has written several books on different aspects of film. He teaches media culture at Brandeis University. 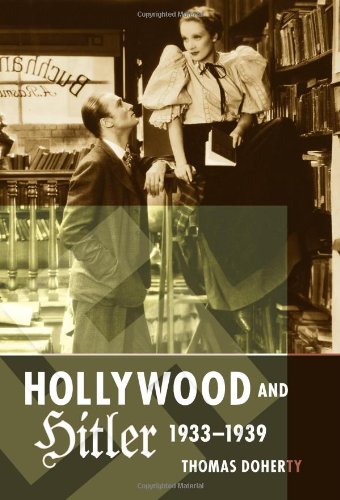 In this book, Doherty points out that heads of American studios were largely Jewish and negotiated with the Nazis to make changes in films to sell better in Germany. This was known at the time evidenced by a 1937 Newsweek headline; Long Arm of Hitler Extends to Hollywood Studio. Even so, the studios had cooperated with the Nazis for most of the decade.

The Hays Code regulated morality in movies. This included nudity and immoral behavior. Someone of questionable moral values must get their comeuppance at the end. Joseph Breen applied the restrictions for the Motion Picture Producers and Distributors.

Dr. Georg Gyssling was a German envoy in Los Angeles and a movie buff. He read all the trade journals, and screened films before they were released. If he saw something he didn’t like, he complained to Joseph Breen. Breen generally approved of the suggestions Gyssling offered without objecting. Gyssling made notes to scene edits for the producers as the movie played then requested the changes. During this period Hollywood made few films made that mentioned the word Jew or had Jewish themes or characters. Everything Jewish was excised from Hollywood movies.

This extended to newsreels, a common news source at the time. New York during the ‘30s had newsreel theaters that played nothing but news film. One of these showed pro-Nazi footage until the Pearl Harbor attack. Few showed newsreels critical of Hitler and the Nazis.

Warner Brothers released Confessions of a Nazi Spy in 1939 which ended the association between Hollywood and the Nazis. After that the link between the studios and Nazis was broken.

Some readers describe Hollywood and Hitler, 1933 - 1939 too light and breezy for the subject matter. Doherty still presents the material factually and seriously even though it is easy and enjoyable to read.

The Collaboration: Hollywood's Pact with Hitler

The Collaboration: Hollywood's Pact with Hitler by historian Ben Erwand covers some of the same material. The book will be published by Harvard University Press in October. 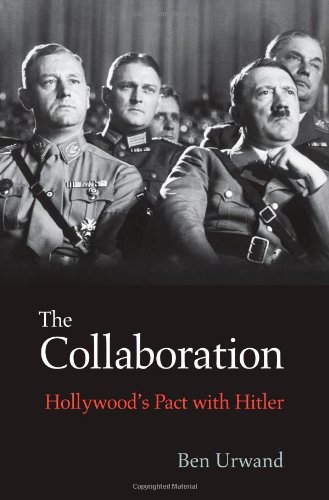 Erwand had the advantage of more source material Doherty didn’t. Erwand includes material from documents which revealed the extent American producers made and changed movies according to Hitler’s and Goebbels’s wishes. According to this book producers and Germans collaborated more closely than previously thought.

The producers were willing to cooperate, and some signed their letters to Germany with “Heil Hitler.” When Gyssling heard It Can’t Happen Here, by novelist Sinclair Lewis, was being made, he got it stopped through the Hays Office. The novel is about the superiority of democracy to fascism. In 1933 the proposed movie, Mad Dog of Europe was cancelled before production started, and a 1934 documentary, Hitler’s Reign of Terror are other examples of Nazi control over studio decisions, and their ability to stop production they considered offensive to German tastes.

The collaboration became so close that MGM invested in German munitions factories in 1938. Erwand found MGM was able to get blocked profits out of Germany in this manner. Because the United States wasn’t a signatory of the Versailles treaty, American companies could do business with Germany and make deals other countries couldn’t. After the Polish invasion, MGM donated 11 of its most popular movies to German war relief.

Erwand writes that the studios had to fire their Jewish employees in Germany, so they had to be aware of some of the extent of Nazi anti-Jewishness. Alternatively, another historian, Steven Ross of the University of Southern California, has found documents of anti-Nazi spy rings in America financed by movie studios. It was crazy times.

These two books offer an interesting view of the relationship between Nazis and American movie studios. They present the material in a readable and entertaining manner. They are worthwhile reading for anyone interested in movies or World War II history.