How "American" Is This? - Potato Chips

As Americans, and as members of one of the world’s youngest Republics, it is always of interest to be the “first” in many things.  Claims for a multitude of household items abound: America is the land of the first telephone, the first transcontinental railroad, etc.

Certain food preparations, as well, can instigate heated debate about “firsts”.  The hamburger debate still rages, with cities all across the US laying claim to have the first chopped- or ground-steak sandwich served in one of its restaurants.  Though the hot dog (in its bun) is more than likely uniquely American the sausage from which it derived (the Old World, Germanic frankfurter, made mostly with lamb) is not.

Certain gems of origin stories carry the cache of acceptance because of the wealth of data associated with them, the oral traditions supporting a claim, and oftentimes the complicit cooperation of a central figure.

For example, the origins of baseball as a uniquely American game created by Abner Doubleday in the mid 19th Century had been accepted for decades.  The story is a complete lie – baseball was not only not invented by Abner Doubleday, it was being played well before the alleged time of his “invention”.  It was a fabrication designed to make the game an American-made product.  Baseball, however, is British, going back to an 18th Century game called “rounders”, with elements of cricket thrown in for good measure.

Other lies on the landscape involve America’s most popular snack food, potato chips.  It could only be wished that a story as rich in detail, character, and happenstance could be true.  Unfortunately, the saga of 19th Century cook George Crum’s culinary sarcastic response to a snooty tycoon customer is an urban legend.

Frenchie
To prepare certain foods in “the French style” in the late 18th Century generally meant trimming away excess fat, as with certain cuts of meat, or with “shanking” – removing cuts of chops from the bone.  Later, the term became applied to any foods that were perhaps julienned (cut into longish strips) or otherwise cut into shapes not indicative of the food stuff (potatoes, for example, in seasons where rivers and lakes were frozen, were sometimes cut

Credit: Library of Congress, public domain into fish shapes as solace to those not enjoying fish).

Thomas Jefferson, as a true Renaissance man and as a world traveler and later third President of the United States, was a willing consumer of the world’s exotica.  He was aware of the latest in culinary trends, and as Ambassador to France in the late 1700s, he had been exposed to potatoes cut thinly and fried.  In 1802, it was he who first served an interesting side dish at dinners at the White House consisting of strip-cut potatoes sautéed in animal fat, then seasoned.

This treat was described by Jefferson as having been prepared “in the French manner”.  While it is unclear, and probably not even likely that the French developed this manner of cooking potatoes, the naming of the process led to the naming of the resultant food: French fries.  The term originally could also mean any food strip-cut and deep fried in oil.  “French fried potatoes” as a culinary term, first appeared in print in English in a cookbook dating to 1856.

The beauty of such stories (and the Jefferson story is a true one) is the humanizing element it brings to any otherwise seemingly godlike person in history.  Jefferson would have been very proud of his cooks’ abilities to produce the dish according to taste (as he was with his introduction of ice cream to White House functions, a laborious and costly confection at the time to produce).

The Man, the Myth, the Legend
George Sparks, later going by the name George Crum, was an American-born man of mixed African and Native American ancestry.  Born in 1822 in the Saratoga Lake area of

Credit: public domainNew York State his African-American father, Abraham, was a horse jockey who had used the surname “Crum” professionally.  Young George similarly took up his father’s stage name and worked as a trapper and mountain guide in New York’s Adirondacks before settling into a stint as a cook.

His claim to fame resulted from a chance meeting in his employer’s restaurant in the summer of 1853.  “Commodore” Cornelius Vanderbilt, one of the world’s wealthiest and most underhanded and ruthless business tycoons of the 19th Century, was a habitué of Saratoga Springs, then a popular resort area, and he frequently dined at the town’s Moon Lake Lodge.  The cook at the lodge was the African-Native American, George Sparks Crum.

On August 24, Vanderbilt had decided to eat there and among the things he ordered were “potatoes prepared in the French manner”.  What arrived at his table displeased him – he

Credit: public domainclaimed they were cut too thickly, and demanded they be thinner.  Two more attempts to please the Commodore by George Crum failed – Vanderbilt sent them back each time claiming he had just recently been in Paris, as a matter of fact, and he knew how thinly sliced the potatoes should be.

In a fit of pique, George Crum (lowly cook) took a potato and a straight razor, and shaved off paper thin rounds.  He deep fried them to death, leaving a curled brownish crisp instead of an al dente potato.  He then liberally salted them (over salted) and sent them out.  Vanderbilt, either genuinely impressed but more than likely to make up for his own boorish behavior, tasted the excessively salted, burnt crisps and pronounced them excellent.

From there, the Saratoga chip caught on and became a great favorite, putting the Moon Lake Lodge on the culinary map. Crum started his own restaurant in 1860, with money he’d

Credit: public domainsaved.  He served the popular chips in baskets on every table, as one would bread or crackers.  The salty snack remained a purely local phenomenon, though, and Crum’s restaurant closed in 1890.  In 1895, a grocer in Cleveland started selling his own potato chips in his store as food items. Crum died in 1914 in obscurity.

The Saratoga chips became a national phenomenon in the Prohibition Era when cottage industries developed “house” brands (the Utz brand in Pennsylvania started in 1921, churning out potato chips on hand-operated machinery at the blistering rate of 50 pounds per hour!  The wax-coated bag came along in 1926, created by the Scudder Company for individual pre-packaged chip sales (before then chips were sold in bulk out of glass cases or from barrels).  But it was entrepreneur and traveling salesman Herman Lay of Tennessee who built a business in the late 1920s and mass produced them under the name “Lay’s Potato Chips” starting in 1932.

Urban Legend Meets Reality
Crum’s underdog African-American humble background, his standing up to the “Commodore” cleverly with his sarcastic cuisine – these elements make for great storytelling.  Sadly, as wonderful as this story is, it is false.

To add degrees of credibility, the fantastical character of railroad magnate “Commodore” Cornelius Vanderbilt was removed from the tale.  He was replaced in the story with an anonymous, but difficult customer – some unidentified gourmand – who refused Crum’s thickly cut potatoes as not genuinely “prepared in the French manner”.  Further changes to the story have not George Crum but the wife of the Moon Lake Lodge’s owner (Cary Moon) as the creator of the chip.

Replacing the characters in the story is pointless, however, as potato chips were not a product of America.

The potato, of course, is American, having been domesticated from its more poisonous varieties into easily digested staple food by pre-Columbian Andean Indians millennia ago. The potato’s spread throughout the world literally changed history – its food value was undeniable as the nutrients it contains could sustain entire families living on nothing more than them for weeks.  The potato virtually rendered famines powerless in Europe (until the Irish potato blight of the mid 1800s).  It did not make its appearance in the American Colonies until 1719, having found a circuitous route “home” via Europe and Ireland from South America (hence the reason the ordinary white potato came to be known as the “Irish” potato).  It was Thomas Jefferson who cultivated the plant on his Virginia homestead, Monticello, as a substantive food that led to the plant’s wider acceptance in the nascent Colonies.

As for variants on preparations, the earliest recorded instance of special cutting and deep frying – “in the French manner” – of potatoes was definitely not American or even French.  It was the Belgians who first made a habit of thinly slicing potatoes to be sautéed and seasoned as a dish.

Since it was the Spaniards who first brought the potato from the New World to the Old World it only seems sensible that it was in European Spanish lands – what was called the Spanish Netherlands, now Belgium – that the potato was first cut and fried.  It was recorded as early as 1680 as a mainstay on Belgian tables.  In 1832, a recipe for “shavings” of fried potatoes was published in an American book whose content had been taken from an earlier English anthology.

Additional etymology supports the contention that it was during World War I that the name “French” as canonically applied to fried strips of potatoes first was applied.  American soldiers tasting the common Belgian food called them “French” because that was the language of the region.  [Today, along the southern border of the Netherlands where it meets Belgium, fries are called Vlaamse Frieten, or “Flemish fries”.]

So, with all of this history – of South American and of European origins – just how “American” are potato chips?  Probably just about as American as American cheese or

Credit: public domain anything else that has been co-opted and identified with this country.  The potato is American; Herman Lay (of Lay’s potato chip fame) certainly was American as was his manufacturing and distribution network.

What makes the Belgian crispy-fried potato American is not George Crum’s apocryphal invention (in a biography written during his lifetime and published in 1893 the incident of his “Eureka!” moment concerning potato chips is not even mentioned) it is American ingenuity and marketing (in other words, American moxie) that makes this salty snack Number One, and as American as chop suey (which really is American!). 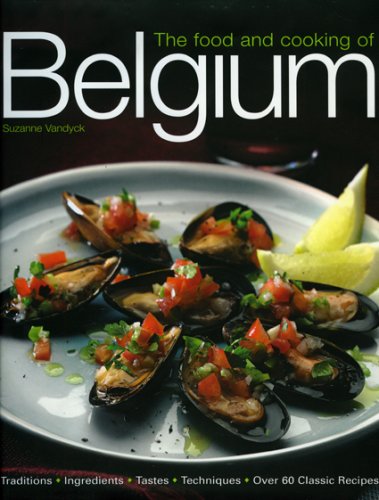 The Food and Cooking of Belgium: Traditions Ingredients Tastes Techniques Over 60 Classic RecipesAmazon Price: $29.99 $17.91 Buy Now(price as of Mar 16, 2014)
So, can you eat like a Belgian? What's to lose? They invented the forerunner of potato chips, try some of their other stuff.
Next >> Fashioning a Reign: 90 Years of Style from the Queen's Wardrobe - Magnificent Exhibition at Buckingham Palace