The Dutch Navy Defeated by Cavalry

In 1795 the French Revolutionary Wars were still in full swing. It was a dangerous time for the monarchies of the European continent as popular sentiment tended to side with the French. In particular the thoroughly unpopular stadholder of the Republic of the United Netherlands, William V Batavus, had reason to fear the French as well as his own subjects. Since he had inherited the throne at the age of three, a series of four regents (his mother, his grandmother, a duke, and his sister) had ruled in his name and had ushered in an era of wild corruption and poverty. However, William, like many Dutch rulers before and since, took comfort in the highly defensible nature of his nation's terrain.

The country of the Netherlands is low-lying (read soggy) and criss-crossed with canals and dykes, obstacles which make the land difficult for an invading army to traverse. The Dutch also had a series of water based defenses, the Hollandic Water Line, which could be used to transform Holland into an island. Yet William and his army had failed to take into account that the January of 1795 was the coldest on record. The canals and dykes that would normally have slowed an invading army were frozen solid. The French General Jean-Charles Pichegru seized upon this once in a lifetime opportunity to conquer Holland. The French Army, helped by a number of Dutch populist uprisings, quickly routed the Dutch Army and entered Amsterdam on 18 January to the cheers of its citizens. William V Batavus, last stadholder of the Dutch Republic, fled the country on the same day, never to return. One day later, on the 19th of January, the Batavian Republic (a French client state) was declared.

Meanwhile the British, realising that Holland would fall, had decided to take advantage of the situation in a characteristically British way, by seizing forty Royal Netherlands Navy warships so as to prevent them from falling into the hands of the French. However, Pichegru, having arrived at the major port of The Hague at the head of his conquering army, learnt that a sizeable part of the Dutch battle fleet had not yet been seized by the British and lay off of the island of Texel, to the north. In normal conditions this fleet would have been unassailable by a French land force, but the weather had grown so cold that the sea around the coast had frozen and the ice had caught the unprepared ships in its grip. Not expecting any action until the ice thawed, the crews of these ships were not on their guard.

Not ready to let this extraordinary oppurtunity slip away, Pichegru ordered a detachment of hussars under Brigadier General Johan Willem de Winter to charge across the thick sea ice and attack the fleet. The French cavalry were able to  dash right up to the ships and surrround them. This proved so shocking to the Dutch admirals and captains, who had clearly never had to fight cavalry before, that they simply surrendered the fleet without offering any resistance. 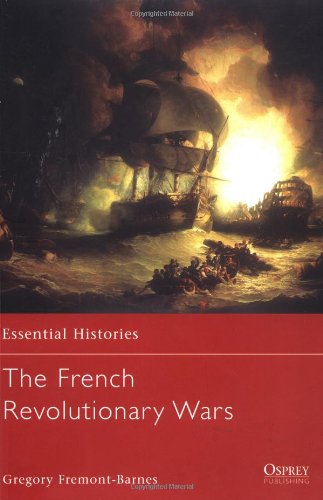 The French Revolutionary Wars (Essential Histories)Amazon Price: $19.95 $9.94 Buy Now(price as of Jul 30, 2013)
Next >> Fashioning a Reign: 90 Years of Style from the Queen's Wardrobe - Magnificent Exhibition at Buckingham Palace