How Environmental Enrichment Can Address And Prevent Feline Problem Behavior

Cats have evolved over the years to adapt to our lives. From the jungle to our living room, their living conditions have changed drastically in order to fit into our lives.  At the same time, they no longer have to hunt for food as it is provided to them while they are in our loving care.  And as loving owners, many of us vaccinate them, take them to a vet, and keep them indoors to keep them safe from traffic, disease, parasites and the other dangers of the world.

So why is it that some cats go stark raving mad, display problem behaviours and suffer from chronic stress? And how is it that environmental enrichment can help prevent, resolve and add a vital stimulus in their lives?

What is environmental enrichment?

Environmental enrichment simply means that you add challenges and things to do to your kitty's environment. This can take shape in many ways and which one is more successful will depend on your kitty's personality.

A cat comes equipped with fangs, claws and a pretty lethal prey drive - even after being adopted by us. Now imagine being all dressed up...and having no where to go. In essence, by providing them with everything except for something to do - especially for indoor cats - it sets them up for problem behaviour. Like us, they have energy that they need to...well, use on something at some point during the day.

Think about it. Normally, they'd expend their energy on chasing and catching food and thinking about how to address the issues in their lives - territorial marking, how to catch the prey in this particular situation, finding a mate, raising kittens. Yet, we feed them in a bowl, neuter them and often keep them indoors. These aren't bad things necessarily, as it contributes to the health, welfare and longevity of said furry creature, but there is still the matter of...what the hell are they supposed to do with their energy meanwhile? It would be kind of like denying a dog his walks - a vital part to their wellbeing.

And this is where obsession with overeating (or even eating non-eatible things), teasing other cats in the house, being hyper focused on the owners coming home and keeping them up at night, chronic stress and apathy - even depression - come into play.

Environmental enrichment basically means that you take a critical look at your kitty's living space and think about what could provide them with the stimuli they need to feel happily exhausted at the end of the day. What does a cat need to satisfy those instinctual drives they are still experiencing? This is why it is often recommended to treat problem behaviours that are caused by this lack of stimulus or need a different outlet, as well as a way to prevent these things from happening in the first place.

So, how about we take a look at the different kinds of mental stimulation that can help out both your kitty and yourself?

A food bowl that requires focus, intelligence and paw-eye coordination. The fact is that obtaining food is a self-rewarding behaviour - something most cats won't be able to resist. It may take your cat a day or so to catch on - and do make sure they get food within 2 days, regardless - but most catch on quickly.

This bowl is excellent for cats that gorge(to then vomit on your rug or steal the next cats food), overeat and even for those that take their excess energy out on by bullying others. The inherent game will shift their focus from the amount of food to consume to the challenge of obtaining it - which in turn taps into the instinct to hunt and problem solve to get their food in the wild. Because it takes longer to get the required food in a day and it costs energy, they'll have less of a need to turn towards each other or objects that might not take their curious nature quite as well.

Meanwhile, it's made from ceramic, dishwasher friendly and can't break down like a technological device could. Pure genius. 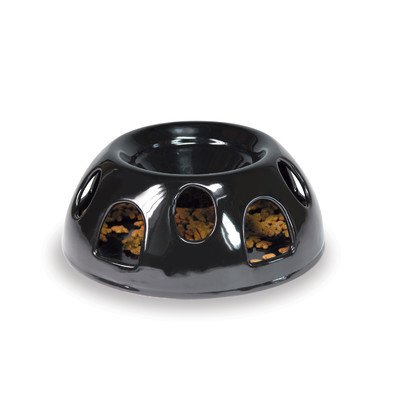 While cats aren't necessarily typical group animals, they do enjoy our attention, cuddles and presence. And one of the best ways to bond with your kitty without having to get off your ass after a long work day is to give them the exercise they need - using Da Bird, or any fishing rod toy for that matter (just make sure you stash it when you aren't around!). Ten to fifteen minutes is all you need.

This toy allows you to sit on your couch and entertain both yourself and the cat with minimal effort. Put a shoe or a box as extra props on the floor and you're golden. Now act like a quivering prey, hiding behind the box by moving the toy about. Your cat will love it. Even older cats or timid ones who might not jump at it will be captivated and unable to let the toy leave their sight.

Word of warning: if you have a timid cat, it might be best to start off with a ribbon or something that doesn't have big, overwhelming feathers hanging from it, as that can be intimidating.

This is also an incredible trick to utilise right before bed, if you then follow the playtime up with a treat. You'll likely notice your cat starting to groom afterwards, which leads to getting ready for a nap. And that is how you can recalibrate your cat to your sleep schedule!

Lastly, it gives you both a moment to forget the rest of the world and just enjoy each other.  They get to expel some energy and blow off some steam ( which is especially needed for stressed animals being treated for problem behaviour) and you get to enjoy their crazy antics, allowing you to forget about the stress of your day.

A good sturdy scratching post is a must in any household. And one placed near a window where kitty can watch the birds outside is even better - it's like live kitty TV. Meanwhile, it provides a place to properly stretch your muscles, take a nap, get a manicure and play with others on your very own jungle gym.

And believe it or not, for those wanting to spoil their kitty despite not having a window with birdies in it - there are kitty DVDs with bird shows just for this reason available.

Meanwhile, giving your cat an intellectual challenge can get as cheap or as costly as you'd like. They even have mental games specifically designed for cats who enjoy displaying problem solving behaviour - such as for instance Siamese. Often they consist of a puzzle that one has to open somehow and shift around to get to the treat inside. While these things can be more expensive...they don't weigh up in price against, say,  buying a new couch because the old one got killed in the line of duty or even getting your cat declawed.

Now, some of the (cheaper) classics that have entertained felines for ages are:

So, as you can tell, there is something for everyone and their fur ball out there. It is baffling  that such small changes can help prevent problem behaviour such as meowing throughout the night,  stress-induced incontinence, destructive behaviour and even depression, yet these tactics are used in behavioral therapy for that very reason.

The amount of tension environmental enrichment - in particular the fishing rod toy  - can relieve in a stressed out animal is not to be underestimated, nor the consequences this may have for the sanity of both the cat and the owner. Or their relationship, for that matter.