How The Government Destroys Opportunity & Wealth

An Example Of Government Destroying Business

Recently in the news was a story about the City Of Los Angeles sending a cease and desist order to a ride sharing startup called Sidecar. The taxicab commisar for the Los Angeles Department of Transportation stated: "Due to the fact that your company has no permits or license to transport passengers for hire, in the interest of public safety, Sidecar, including all of its agents and contractors, is hereby directed to cease and desist from picking up passengers within the City of Los Angeles," wrote Thomas M. Drischler, taxicab administrator for the L.A. Department of Transportation, in a letter addressed to Sidecar CEO Sunil Paul.Everything must get permission today in our Soviet-esque society. Regulations that stifle competition, discourage efficiency, and only serve the status quo. No wonder Americans truly dont give a shit, why make the effort when your just going to get smacked down anyway.Government intervention has a negative economic effect. Without realizing it, as more individuals calls for taxation to fix problems such as wealth inequity. But thinking of it logically taxing wealth causes the individuals who would otherwise invest it to hoarde their money. In Henry Hazlitt's economics in one lesson, we are instructed that the 50$ Mr Jones had to spend fixing a broken window, would have been put to more efficient use modernizing his store, or hiring another employee. While some may see the damage to the windows as an opportunity for the glass maker. It has a negatve effect on the existing business.The Myth Of Public Safety Mr Drischler said it is in the interest of "Public Safety". Who decides what is safe for the public ? Me, you, them ? Why cannot I decide what I can do with my own personal property ? What is different in giving a co worker a lift, and them sliding you a twenty for gas ? If two or more individuals want to engage in action that clearly benefits one another and no one gets hurt then whats the bother. Public safety is the biggest lie fostered on the American public outside of the civil war was fought to free the slaves. Who defines the public good ? If it means safety on the road, they eveidently never witnessed my grandpa behind the wheel of a car. Does it mean that government officials can operate outside the manadated speed set ?  The concept of public safety is not about preventing injury or actually making people safe. There are still motor vehicle accidents, there are still good drivers and bad drivers.Whats the difference in fatalities involving a drunk driver versus eating a hamburger ? Since insurance is required, they have removed the inherent responsibility of the invdividual for their automotive actions. Truly the only reason for public safety is control. Control of us by them. Control of how we want to live our lives, controlling where we go, how much money we make, who we can or cannot live with. The government believes it can solve a problem by declaring it illegal, to make a personal choice forbidden. As the devastating war on drugs can attest, drugs dont disappear and a thriving dangerous black market takes the helm of managing the trade.Ride share services are incredibly popular in highly concentrated metro areas precisely because the taxi cab industry colludes with government to implement regulations to drive away competitors. Wal Mart and large corporations have armies of lawyers that can wade through hurdles of regulations that also help them forbid competitors. These same corporations have the ability to funnel money to politicians so as to write the regulations that they will abide by.  Similar to how the new Obama regime healthcare system is going to work.  The United States are littered with the shells of up and coming businesses that would have provided service and efficiancy. As well as profitability and wealth for others. Its time to get government out of business and bring back personal responsibility. 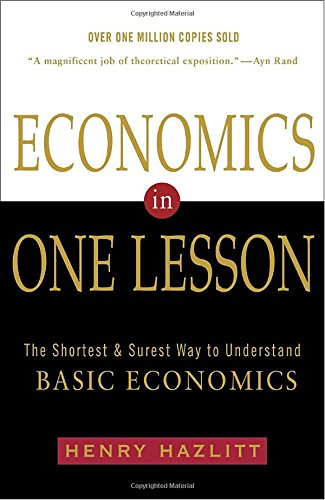 Economics in One Lesson: The Shortest and Surest Way to Understand Basic Economics Amazon Price: $14.99 $4.99 Buy Now(price as of Apr 4, 2016)
This book explains in easy to understand language how government messes up the economy. Learn how to better understand what is happening in the world around you and not get left behind when the crash happens.
Next >> Top 10 Wealthiest California Suburbs of San Francisco