Looking to start eating healthier?Â  Consider using a rice cooker - you can steam and cook rice as well as much more and eliminate excess oil from your diet.Â  Check out the best rice cooker brands. For those interested in acupuncture I also have a site with information on relationship between acupuncture and arthritis. I encourage you to make comments on my articles as I try to follow up with all of them.
InfoBarrel is a writing platform for non-fiction, reference-based, informative content. Opinions expressed by InfoBarrel writers are their own.
InfoBarrel > Home & Garden > Gardening & Yard Care

How To Grow Giant Pumpkins

Tips on How to Grow Giant Pumpkins

Since the dawn of civilization man has loved to compete and this competitive spirit has spread to most every area including giant pumpkins. Gardening enthusiasts are keenly aware of the thrill of being able to grow giant size vegetables. They will grow, nurture, sing to and even love that vegetable. Growing giant pumpkins is done not so much as to make pumpkin pie, but to compete. If the truth be told, giant pumpkins don’t taste all that good in pie, but an enormous pumpkin sure looks good at a state fair competition.  I'm sure a giant pumpkin would make a mean looking jack o'lantern for Halloween too.  Anyone can learn how to grow giant pumpkins by choosing the right variety and seeds.Pumpkin contests are held at county and state fairs and other venues to see who produces the biggest giant of them all. Maybe you have never tried growing a giant pumpkin or maybe you have tried but never quite succeeded. Either way, this article covers information and tips on how to grow giant pumpkins that you’re sure to find interesting.

The minimum space requirement is approximately 400 square feet or more per pumpkin plant. The patch has to be level and in a spot that gets full sunlight. Rake out the patch, and clear away stones and debris. Mix the soil with shredded leaves, manure, compost, dried grass, corn meal, kelp meal, dried grass clippings and humic acid fertilizer (granules). The mixed soil should be left to sit all through winter.Tip: It’s best to start soil preparation for the pumpkin patch in the fall. In spring test the soil to see if it needs any additives.

There are many different varieties of pumpkin seeds and the first tip on how to grow giant pumpkins is to make sure to choose the best giant variety for your area that have proven to produce winners.  Some varieties of pumpkin seeds are best for producing pie pumpkins for making pumpkin pie, others are best for that traditional shape and bright orange color of the Halloween jack o'lantern.  But Atlantic Giant Pumpkins are tested giant pumpkin champions.  You can purchase a pack of Atlantic Giant pumpkin seeds for less than four dollars.  Use four inch peat pots; plant one seed to a pot and fill with lightly moistened soil. Place the pots in a warm, sunny spot and keep the soil moist.Tip: Get a head start – plant in mid to late April and keep the pots indoors.  If you produce a real giant winner, try to save some of the seeds and experiment with them again next year.

Transplanting to the Garden

Wait for the first leaves to appear on the pumpkin plant and then transplant the seedlings outside into your prepared pumpkin patch. These plants are very delicate so great care needs to be taken not to damage the pumpkin seedling.  Dig a hole and place the pot into it without removing the pumpkin plant; the pot will break down over time.

Erect a mini greenhouse to keep the plants warm and put up wind barriers to shelter the tender plants.

Tip: Those serious about learning how to grow giant pumpkins often use ground heating cables to warm the soil till the coolness of spring passes.

Regular weeding all through the growing season will help prevent insects and disease from attacking the pumpkin vine and eliminate competition from weeds taking away water and nutrients from your plant.

Pollinate flowers between the end of June to early July for pumpkins to develop.  Masters of growing giant pumpkins hand pollinate, they don’t wait for bee pollination.  You can do this using a cotton swab to transfer the bee pollen from one flower to that of another plant.

Keep checking the pumpkin vines to monitor progress. When July begins, choose the two largest, fastest growing pumpkins and remove the rest from the vine.  By thinning out the competing pumpkins all the soil nutrients will be focused on the two potential champs.Be extremely vigilant of pests, diseases and small animals throughout the growing season and maintain your weeding.  Be sure to water your pumpkins regularly.  Pumpkins have shallow root systems and require generous watering. Tip: water during the late afternoon to early evening, allowing  the leaves of the pumpkin plants to be  dry by nightfall.

You want to allow your pumpkin grow to the maximum size possible but be sure to harvest your champion prior to a damaging freeze.  Letting the pumpkin freeze will ruin it for competition purposes.  Now you know how to grow giant pumpkins, all that's left is to buy your seeds and get them planted!Good luck! 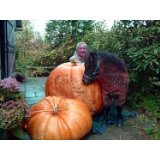 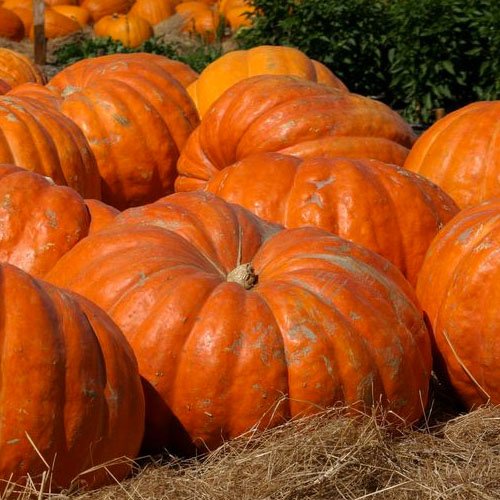 10 Seeds, Pumpkin "DILL'S ATLANTIC GIANT" (Cucurbita maxima) Seeds By Seed NeedsAmazon Price: $2.65 Buy Now(price as of Jul 17, 2013)
Next >> How to Keep Raccoons Out of the Garden - Don't Let Your Yard be Their Midnight Buffet