Kathy Visit my site for more garden related articles:www.groundcoversandgardening.com
InfoBarrel is a writing platform for non-fiction, reference-based, informative content. Opinions expressed by InfoBarrel writers are their own.
InfoBarrel > Home & Garden

How To Have Herbs Without A Garden

My husband is a great cook.  He creates the most delicious meals for us and takes great delight in it. It’s a good thing because I’ve never discovered the joy of cooking really, although I love to eat good food.

We make a good team though, because he loves using herbs and I love growing them. We are a bit short on space in our new spot, however, and I don’t have room for the herb garden I used to have, taking up about 20 square feet outside our kitchen door. So I had to come up with another plan which would still give us the herbs but not take up the entire back garden.

I like to have the herbs close to the kitchen so that we actually use them, and they do need to spend most of the day in the sun, so I decided to buy a half barrel, place it outside our kitchen door and plant the herbs in there. The barrel I found is a plastic one but a half wine barrel would be great.

A half barrel has a nice sized growing area but you don’t need to have soil all the way down to the base because the herbs’ roots will never go down that far. I filled the bottom half of the barrel with wood chips but you could use any material that would fit inside the barrel, like gravel or rocks, I just didn’t want my barrel to be too heavy. Whatever you use, make sure there is enough drainage so that the barrel and the plants don’t become waterlogged.

Next, I filled the barrel w

Credit: KathyRMith a bag of potting soil. Most herbs comes from the hills of the Mediterranean where the soil is thin and dry, so they are not very fussy about the soil, as long as it drains well. I wanted to grow a tomato plant in the barrel as well and tomatoes like nutritious soil so potting soil is a good compromise. I can feed the tomato plant with a foliar feed later on whereas the herbs won’t require any further feeding.

Along with my tomato plant, I chose to grow dill, coriander (cilantro), basil, garlic chives and plain chives, French thyme, lemon thyme and oregano. Quite a few herbs there but some of them will mature faster than others. Coriander will start going to seed as soon as the weather warms up so it’s unlikely to crowd out the others. Once it’s gone over, I’ll just plant some more. Herbs like thyme and creeping oregano are more like ground covers and so are unlikely to become too unruly

I planted the tomato first, at the back of the barrel, in a climbing frame so that it doesn’t flood the area. I created dip around the plant so that it takes in extra water. Then I planted all my little herb seedlings, including a pansy that had self seeded in my chive pot. Always water your plants into their new homes, it helps them settle in.

A couple of weeks later and my herbs are growing apace. I have just discovered a little sunflower seedling coming up too and I’ll leave it there to see if it’s a giant sunflower or a smaller kind before I pull it out. That will add color to this culinary mix. It’s easy to grow herbs in pots and they make a delicious addition to the pot inside. 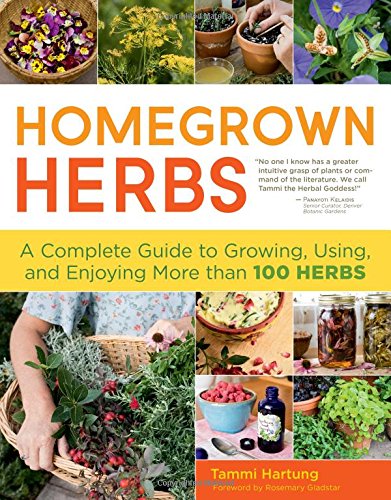 Homegrown Herbs: A Complete Guide to Growing, Using, and Enjoying More than 100 Herbs Amazon Price: $19.95 $10.30 Buy Now(price as of Jan 24, 2016)
Next >> Pedestal Sink Cabinet - Instantly Create a Portable Under Sink Vanity - Perfect For Rental Homes - No Construction or Harm to Walls