How To Repair A HoneyWell Zone Valve

How To Repair A Honeywell Zone Valve, is an article that will walk the average homeowner through the process of repairing their heating system.

Honeywell zone valves are a user friendly part and performing this repair yourself can save a lot of money.

Basic heating systems have one zone. This means that one thermostat runs the whole show.

When a system has multiple thermostats due to different temperature requirements in different areas, sometimes this type of zone valve will be employed. They are zero maintenance, so the only thing we can really do if they go bad is to change the power head.

In extremely rare instances, the body of the valve will go bad and this will require draining the portion of the piping that can be isolated or the entire system to repair.

This can be a complicated job with some systems and if you don't have a good grasp of hydronic heating systems, then a serviceman should be called for this repair.

The electric motor on this valve is what normally fails and this can easily be changed in an hour or less, once you have the part on hand and a little insight.

When you are adding a zone to an existing hot water heating system you will need to arrange another loop off the boiler and the flow must be controlled separately from all of the existing zones. One cannot run when the other calls. This is accomplished easily using a Honeywell zone valve. It is installed right in the piping to the zone and simply opens and closes on call from it's thermostat.

There are other companies that manufacture zone valves but the Honeywell zone valve has long been the industry standard. Other valves can not seem to stand up for longevity or ease of installation and repairs. 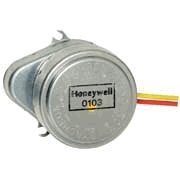 What Does A Honeywell Zone Valve Do?

And How Does It Do It?

Honeywell zone valves are electric flo control valves. They open and close on a call for heat or circulation. The room thermostat is connected to the boiler through this valve.

When there is a call for heat, the thermostat calls the zone valves and then when it opens, a call is sent from the valve to the boiler telling it that heat is needed. The circulator pump comes on and hot water is pumped through the radiation until the thermostat is satisfied.

Once the room has warmed up to the set temperature the circuit opens. This allows the zone valve to close and stop circulation, the message is no longer being sent to the boiler so that shuts off as well as the pump. The system now goes into standby until there is another call for heat.

This is the total operating sequence for a hot water heating system of which this valve is a major player. When the electric motor burns out, the valve will not only fail to open but it may also fail to send the message that there is a heat call to the boiler. The remedy for this issue is to change the power head on the valve. 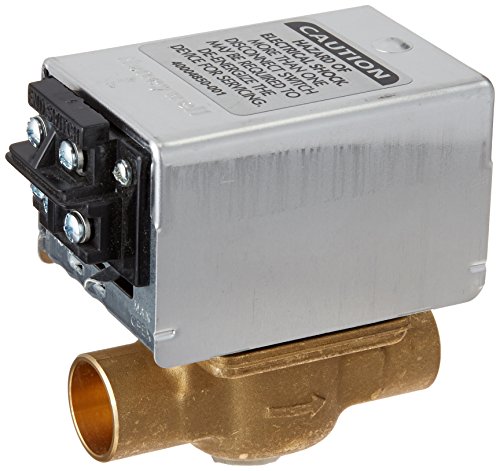 Get The Tools Out

First and foremost, before you begin this repair make sure you have turned off all power to the entire system. Use the emergency switch and also make sure you test the zone valve to make sure there is no power to it prior to working on a Honeywell zone valve.

Once you have acquired a new power head that matches the model you have installed, locate the wiring terminals and use a piece of tape to mark each wire and where it came from. remove the three or four wires depending on your model and push them out of the way.

Remove the cover from the power head by pulling straight out. Inside the valve cover you will be looking for a screw on the top left and one on the bottom right. These two screws can be removed with a medium flathead or phillips head screwdriver, again depending on the model. Once the screws are out, pull straight out on the power head and dislodge it from the valve body.

Now note the drive shaft that protrudes from the rear of the power head. There is a flat corresponding hole in the valve body. Line this slot up, either horizontally plumb, or vertically level depending on your model. Then make sure the new power head shaft is in the same position. Push the shaft into the body and wiggle it in until it seats. The valve should sit flat with a little pressure from your hand and then the screws can be reinserted and tightened evenly.

Make sure you tighten one side a little, then the other and so forth and so on, until the power head is tight, it should sit nice and flat. If the valve doesn't look like it mated right it probably didn't and you should try again to make sure it's in right.

Make sure to call the zone by turning up the thermostat to assure that everything is functioning and your done. You've just saved several hundred dollars in labor for a service call.

Next >> DIY with recycled glass to enhance and extend your home