Buy The Snark Handbook: Politics and Government Edition cheaply from Amazon. You too can earn money from writing articles by signing up for InfoBarrel.
InfoBarrel is a writing platform for non-fiction, reference-based, informative content. Opinions expressed by InfoBarrel writers are their own.
InfoBarrel > Entertainment

How To Survive A Political Election

The first thing that must be done, if one wants to know how to survive a political election, is to move.

Somewhere like the Arctic circle, or maybe deep in the Congo. Anywhere the population within 50 miles or so doesn't exceed one.

Political elections throughout time have brought devastation and chaos, wherever they're held. They cause mayhem in the streets and unrest among the natives.

No one likes change and elections change everything. Parties change, politicians and lobbyists, immediately must scramble, to realign themselves with the winners. Concepts and ideologies from the last leader, must be erased and forgotten.

In the midst of all this chaos is never the time to be running for the hills. The offensive move is suggested at least one whole year before any primary event begins.

This will assure that no information concerning the upcoming event will sink into our head unintentionally and corrupt our intended complete and utter denial, that any election will ever happen.

All forms of media should be avoided on the way to the airport or train. Chances are they'll be attacking through this media. Your chance of getting through unscathed, will depend a lot on the route you take.

Use back road's and for all it's worth, stay back from mini van's, as they have those new TVs hanging down, where you may accidentally glance over and catch Wolf Blitzer, or Oprah, interviewing one of the enemy.

Once we have been contaminated by any media, or other means of getting their point across, it's much too late. The only known cure for political infestation is a complete frontal lobotomy.

Electric shock therapy has been used in the past to erase political ideals, but has shown limited result. The total removal of conscious reasoning is called for, or we could be left with a nasty little opinion.

Even worse we may act on the opinion. Some have even been known to become so inflicted with this condition, that they we're compelled to go out and vote.

Most will talk themselves down before it goes this far and the polling numbers reflect this fact.

Remember, when making the trek to your hide away, wherever it may be, not to take a cell phone. They have the technology to find you.

That little GPS will text you some deadly insight and before you know it, the infection can set in again, in the form of that deadly opinion.

How to survive a political election is a complex question. It can directly depend on whether or not the wound has festered yet.

Once an opening is found, and political knowledge of any kind makes it's ugly way into our head, that's it, we've been contaminated. Our chances of coming away the person we were prior to the election are gone.

Once the election is over and we're one hundred and ten percent sure there will be no recount of any kind, it's safe to come back home.

At this point all should be calm for at least the foreseeable future. Just remember, right when you think it's OK to come back to civilization, the enemy will campaign again and start the whole issue all over. 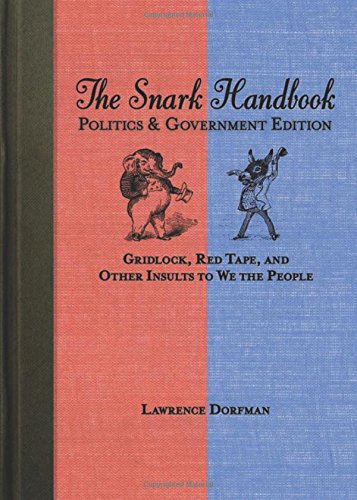 The Snark Handbook: Politics and Government Edition: Gridlock, Red Tape, and Other Insults to We the People (Snark Series) Amazon Price: $12.95 $0.48 Buy Now(price as of May 1, 2016)
Next >> Movie Review: The Girl on the Train