How to Become an Effective Leader

In one of my articles, I talked about the different types of men that you may encounter throughout your lifetime. One of those types is the so-called Leader. I'm quite aware that the qualities of being a leader is not just something that everyone naturally possess. Some people are initially bestowed by the expertise to lead while some become experts through experience.

Becoming a leader seem daunting for most people. It's because the thought of carrying such a huge responsibility on one's shoulder scare the hell out of everyone. On the other hand, the people who are willing take on the challenge won't get it easily either. Today's article will discuss different tips on how to become a leader, and an effective one at that.

How to Become an Effective Leader

1. Be decisive. As a leader, you will always end up making the final decisions for your team and you should always take full responsibility for the outcomes of those decisions. In making a decision, you should think rationally. This is where your experience will come into play. Look for patterns, try to find loopholes, and use every resource you have to succeed. Time is of the essence and every minute you waste can either be life or death for your project.

3. Bring out everybody's full potential. There two things that an effective leader should always aim for. The first one is success. The second one is to bring out each and every one of your members' full potential. As a leader, it is your job to encourage your people to aim higher, and to think bigger. Encourage them to leave their comfort zones so that they'll experience different horizons. Your associates will be the future leaders of their generation and it's your job to train them to become better leaders of tomorrow.

4. Believe in the ability of your team. One of these days you will definitely encounter a moment when your success lies the in the hands of your team. When those moments come, you should have complete trust in their abilities to pull it off. Role players are there for a reason. They're the ones who step up when they're needed to and if you don't trust them, then it's most likely that they won't trust themselves either thus making the chances of failing more plausible.

Just take a look at Michael Jordan and LeBron James. They're two of the best to ever play the game of basketball yet they know that there are times when giving the ball to their teammates are better for their team. That's what believing is. Giving up your chance to take the last shot and resting your life in the hands of your teammates. 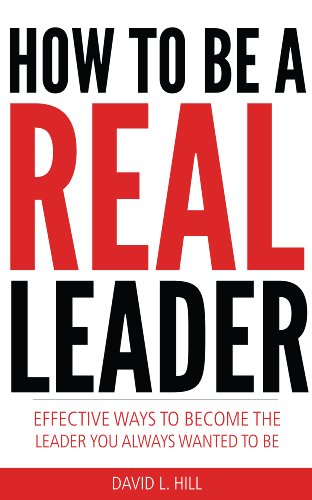 How To Be A Real Leader - Easy Ways to Become the Leader You Always Wanted to Be Amazon Price: Buy Now(price as of Oct 9, 2015)

5. Learn to appreciate your peers. If one of your peers did something good, commend him for his actions. A good leader is very appreciative of his members because he understands that all of his success are made possible by the people under him. People also work better when they feel appreciated. That's why if you want to have a more productive team, learn to be more thankful to your peers.

6. Listen to your associates. A leader must always make the final decision. However, listening to your associates for their suggestions won't hurt either. The people around you may have some valuable information that you can use on your current projects. This is why listening to them is a must if you want to achieve effective results.

7. Approach your peers. You should always be the first one to try to be close to your peers and not the other way around. In most cases, people are usually intimidated by their boss. While this sometimes prove to be effective. It's usually better that the people under you are comfortable with you. They can think more clearly thus becoming more effective members of your team.

8. Set rules. There should always be a clear line between you and your peers no matter how comfortable you are to each other. This is where rules come into play. Rules maintain the hierarchy of your team. You are the leader thus you deserve to be respected. There will be times when a team member may cross the line. When that happens, make sure that you reprimand him/her. This is to maintain the respect in your organization. Without respect, a team won't be able to function properly.