It has been used for centuries and is making a strong comeback. I hope this artice answers some of your questions.
InfoBarrel is a writing platform for non-fiction, reference-based, informative content. Opinions expressed by InfoBarrel writers are their own.
InfoBarrel > Health > Alternative Medicine

How to Cleanse Your Body - Does a Clay Detox Work

One Women's Search for Optimum Health

In my case it's my friend Carolyn. She grew up in a world when the best vegetables were the healthy looking ones sprayed with pesticides and smoking wasn't just socially acceptable, it was an important rite of passage that showed you were very cool.

Add years of heavy drinking and Carolyn was a physical mess. On her fortieth birthday she decided to turn things around. In one day, she quit smoking and drinking and made a pledge to adopt a healthier lifestyle.

In the past decade it's been quite a ride. She has engaged in jogging, weightlifting, yoga and pilates. Her life got better. She got happier, but there was always one more thing to try.

She has fasted, juiced and tried every diet and treatment on the planet. Interesting enough weight loss was never an issue. When you live on beer and cigarettes, you don't tend to be terribly overweight. You do however get a little flabby, pack on belly fat and lack muscle tone.

Carolyn's latest fad is eating clay. My first thought was "blechhh!".  Was I was a young tomboy, admittedly I ate a little dirt and the odd worm.

Carolyn is looking better than ever. She says one book has really turned her life around.

More on that later.

All About Bentonite Clay

First of all, we’re not talking about just any kind of clay. Don’t go grab clay from your local area and start eating it.

The University of Wisconsin’s Department of Family Medicine has an in depth look at a seven day detox program that includes one day of fasting. One the fasting day, they recommend taking Bentonite clay capsules three times a day to bind gut toxins.

In a study from Arizona State University, bentonite clay was found to be effective at killing antibiotic resistant bacteria, which has the potential for exciting long term medical benefits.

Eating clay is not new. It’s a practice that has taken place for centuries. In some cultures people carry clay balls with them to be used for medicinal purposes.

If you have ever used a commercial detox kit, chances are you have already eaten Bentonite clay. It’s a common ingredient in the laxatives included in the kits because it is effective at drawing out toxins and cannot be absorbed by the body.

The prime theory behind eating Bentonite clay is that our bodies produce a lot of toxins, often more than we can get rid of. Those toxins are a prime factor in aging and disease. Proponents of using the clay suggest that by ridding our bodies of toxins, we will be healthier and age slower.

The Health Benefits of Bentonite Clay.

While much of the information is anecdotal and not backed up by scientific research, people who use the clay regularly claim a host of health benefits.

They say it strengthens the immune system and stimulates the liver, which is the organ most important in keeping our system free of toxins.

They say it helps with the digestive system, particularly by keeping the colon clean and helping the beneficial bacteria in the gut thrive.

Some people with irritable bowel syndrome claim it eases their symptoms.

There does not appear to be any adverse side effects to using Bentonite clay however people who already have  compromised immune systems, who are pregnant or elderly should proceed with caution.

As with any type of alternative medicine it's wise to talk to your health care provider before proceeding.

If you want to try it, choose good quality Bentonite clay and keep it out of contact with any metal object. Most people simply add the clay to water and drink it, but clay capsules are also available. 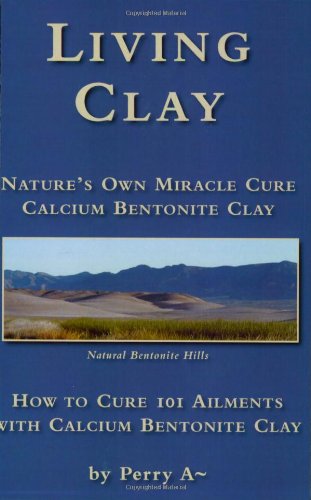 Clay baths have also been around for centuries and they are somewhat like those expensive mud wraps at upscale spas.

The theory behind the health benefits of clay baths is that your skin is the largest organ in your body.

One of it's major functions is to get rid of toxins. Have you ever been around someone who doesn't wear deodorant? There's some pretty nasty and stinky stuff coming out of their  body.

What if you could improve that skin function by sitting in a bath that actually helps draw the toxins out of your skin?

While calcium bentonite clay is preferred for oral consumption there are also other types of clays that work will in the bath.

People who use clay baths say they feel so clean afterward and they sleep well.  In reading customer reviews, one woman said she enjoyed the feeling of the gentle tugging on her skin.

Another wrote that the baths were helping her son who suffers from attention deficit hyperactivity disorder.