Many homeowners have water problems in their crawl space or basement. To fix the water problems homeowners or home repair contractors cut a channel around the perimeter of the basement or crawl space and dig a well in one or two corners, depending on the extent of the water problem.  sump-pumps are then installed in the wells. As the water enters the basement, it collects in the cut out channel and will flow to the well where the sump-pump is housed. The water continues to collect in the well until it reaches the level where it activates the sump-pump. the sump-pump then pulls the water from the well and sends it into the drain hose that is connected to the pump. Most drain hoses go through the basement or crawl space wall and connects to a drain pipe that ends a distance from the house’s foundation to prevent the water from re-entering the house.  Some drain pipes lead to dry wells, while others lead to the street. Some drains tie into the sewer system. In many cities and towns, tying a sump-pump drain pipe into a sewer system is not permitted.

Over time and depending on the amount of water that enters the crawl space or basement, damp, musty odors can develop. The damp smell is from the water and dampness in the sump-pump well as well as any debris that is in the water. Many times the drainage channel around the perimeter of the basement will also begin to emit a foul damp smell. Typically, damp smells in drainage channels or in the sump-pump well signals mold or mildew growth. Any time there is a damp, musty or moldy smell – it requires cleaning to stop the spread of mold or mildew as well as eliminate the damp odor. Mold and mildew in basements and crawl spaces can make the occupants of the house sick and threaten the stability and structural integrity of the house.

Getting Rid of the Damp Odor

Pull out the electrical cord that connects the sump-pump. If the sump-pump is hard wired, meaning the plug doesn’t connect to an outlet, shut the breaker that supplies the power to the pump.  Never work on any electrical device that is connected to the power source because it can result in a severe shock and may even cause death.

Wear safety goggles, rubber gloves and a filtering mask. In most cases a medium efficiency mask is sufficient, but if the damp smell is very strong wear a high efficiency mask. Open the windows to help provide adequate ventilation.

If there is a lid on the sump-pump well, take it off. Some wells have lids and some are open.

Lay a few large rags or small tarp on the floor next to the sump pump well with a bucket on top.

Use the appropriate screwdriver to loosen and remove the clamps that hold the hose onto the pump.

Lift the pump out of the well and place it in the bucket. Take the pump outside and spray the bottom of it with a stream of water from a garden hose to wash off any mold, mildew or slime.

Fill a bucket with water and add ½ cup of chlorine bleach. Dip a scrub brush into the bleach and water. Scrub the parts of the pump that usually sit in water. Rinse the pump again. Rinse all of the debris off the scrub brush before submerging the brush into the water.

Bring the chlorine bleach and water mixture back into the basement or crawl space.

Use a wet/dry vacuum to remove the water from the well.

Bring the garden hose into the basement or crawl space. Set the hose’s nozzle to a forceful stream. Spray the inside of the well to loosen and remove any slimy buildup from the wall and bottom of the well.

Drain the well with the wet/dry vacuum. Suck up any slime and debris from the base of the well.

Dip the scrub brush into the bleach and water. Scrub the bottom and sides of the well to remove any remaining mold, mildew and slime.

Rinse the inside of the sump pump pit with water from a garden hose. Drain the pit again with a wet/dry vacuum. Always suck up any debris, dirt and slime from the base of the pit.

Repeat the process until no slimy buildup, mold or mildew remain on the walls or base of the pit.

Bring the sump-pump inside the basement or crawl space and set it back inside the sump pump well.

Reconnect the hose and use the appropriate screwdriver to tighten the clamps.

If there is a lid, put it back over the pit. If you do not have a sump pump well lid, consider getting one. Lids help to cut down on the damp odor.

Plug the pump back into the outlet or turn the breaker back on.

Damp Smell from the Drainage Channel

If you still smell a damp odor after cleaning the sump pump and well, clean the channel.

Add ¼ cup of chlorine bleach to the channel and the end point of the channel, which is the farthest distance from the sump pump.

Lay a garden hose without a nozzle just before the chlorine bleach. Turn the water on so a slight and steady stream of water flows from the hose. Let the water run from the hose until the water reaches the sump pump.

Turn off the water and let the bleach and water remain in the channel for an hour or so.

Clean the sump pump well and drainage channel every few months to prevent damp odors and stop the growth of mold or mildew. 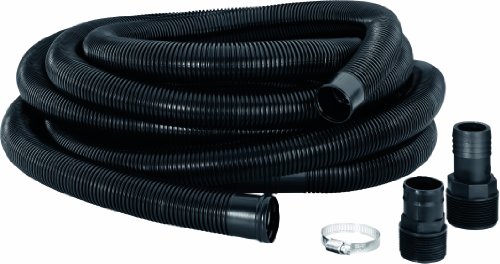