I am Bill Hunter, an avid hiker. For hiking related articles, see the following: A Thrilling Trek to the Key Hole on Longs Peak An Exhilarating Hike to Scenic Hallet Peak Best Hike for Kids in Rocky Mountain National Park  Love to write too? Join me on here on InfoBarrel.
InfoBarrel is a writing platform for non-fiction, reference-based, informative content. Opinions expressed by InfoBarrel writers are their own.
InfoBarrel > Technology > Science > Earth Sciences

Weather, whether you like or not, is much discussed. Weather myths and misinformation spread like mold spores in Houston. Here I debunk some of these myths for you. With your improved weather literacy, you can either impress or annoy your less weather-literate friends. Knowing basic weather facts might also keep you safe in your daily life. You should be able to look at the radar during bad weather and know in seconds whether to risk a trip across town.

Can 100 Degrees and 100% Humidity Actually Happen?

Living in Houston, I often hear people complain about the heat and the humidity. But when they say it is 100 degrees with 100% humidity, I might correct them. First, what is humidity?  The relative humidity is the amount of water vapor present in air expressed as a percentage of the amount needed for saturation at the same temperature[3].  At saturation, air is holding the greatest amount of water vapor. As air gets hotter, the saturation level goes up a lot, meaning it can hold much more water in gaseous (vaporized) state. At 100 degrees, air can hold so much water vapor that you would have to evaporate a large part of the Gulf of Mexico before the air could reach 100% humidity. At lower temperatures, say around 50 degrees, it is rather common to have 90 or even 100% humidity. Think about how many foggy days places like San Francisco have, where the temperature is often in the 50s.

If it is Raining, How Can the Humidity be Less Than 100%?

You can't assume that when it is raining, the relative humidity is 100%. It is true that for rain to form, the humidity must be 100%[2]. Water droplets form because the air is saturated and can hold no more water vapor. But, that is true only where the rain forms. Where the rain falls, the air might not be saturated. Hence the relative humidity can be less than 100% while it is raining.

Why is Snow so Rare in the Deep South?

Snow requires adequate moisture and cold air. In the deep south, that combination rarely occurs. If moisture is present, it usually comes from the Gulf of Mexico, which brings warm air with it.

In the unlikely event that moisture is present and the ground temperature is low enough (below freezing) for snow, if any of the air, from the ground to the clouds where the precipitation forms, is above freezing, then that warm air will melt the snow before it reaches the ground. Then you might have freezing rain. Rain that freezes when it hits cold surfaces. This brings any city, especially southern cities, to a complete standstill. Just the threat of freezing rain causes Houston to cancel public schools.

Why are so Many Weather Records Being Broken - is it Global Warming?

If you watch the news, almost every week a weather record is broken somewhere. You might think that we live in crazy times. But before you get too concerned, realize that when a reporter claims that today was "the hottest June day ever", they are undoubtedly incorrect. Why? Because out of laziness they use the term "ever" instead of the more precise "in recorded weather history", which in most cases in the United States is less than 150 years. This is important to keep in mind because when making claims about the impact of global warming, you need to look at the big picture, not just the last 150 years.

What Does a 50% Chance of Rain Really Mean?

Most people have no idea what a 50% chance of rain really means. Does it mean that it will rain 50% of the day? Does it mean that there is a 50% chance that, at some point during the day, it will rain where your are? Actually, you need to understand that a forecast is valid for a certain geographical area (a city or a region). When a forecaster calls for a 50% chance of rain, they are usually saying that 50% of the forecast area will get rain that day, and 50% of the area will not. On a side note, you can tell that meteorologist developed a technical definition like this because they can almost always use it to claim that a forecast was right. If they forecast a 20%  chance of rain, and it rains in your part of town, but not in your friend’s, the forecast can still be right for both of you. Also, the more you travel around within the forecast area, the more you increase your odds of seeing rain.

When you travel somewhere that you have never been and you want to know what to wear, you probably look up the “normal” or average temperatures for that area. This information is useful but misleading. At the very least, it does not tell the entire story. Weather is variable. To arrive at the average daily or monthly temperature for a given area, you average the temperatures observed on the day or month in question over recorded history. But very few days, if any, are average. What might be more useful to know (and is harder to find on the Internet) is the likely range of temperatures that you can expect, based on the natural variability observed in the past.

The same concept of variability applies to precipitation. Part of the desert southwest might get less than 10 inches of rain per year, but most of it typically falls on only one or two days of the year. This is why in the news you often see dramatic stories about flash floods in the desert. Despite the news hype, these events are normal and expected.

What is the Difference Between Weather and Climate?

The weather is short-term conditions in the atmosphere where the climate deals with longer term trends and averages over a typically larger area. As stated by the National Oceanic and Atmospheric Administration (NOAA) "Climate is what you expect, weather is what you get."[1]

Can you Blame a Bad Storm on Global Warming?

No. A snow storm, hurricane, heat wave, or polar-vortex induced arctic freeze, no matter how severe or unexpected, is a short-term weather event. Global warming is about long-term weather patterns that take decades or centuries to emerge. You could link a pattern of frequent storms that occur over decades to global warming or some other global cause, assuming you had enough data to do a proper statistical analysis.

To be weather literate, one thing you must be able to do is "read" weather radar. By that, I mean you can look at an animated radar and immediately know roughly what to expect weather-wise over the next hour or two. The first thing you need to know is that weather moves generally from west to east. There are exceptions. Hurricanes often move in the other direction. In an animated radar, you can see for yourself the movement over the past hour or so and see what direction any rain or snow is moving. The colors on the weather radar show how heavy the precipitation is. Generally, red and orange is heavy rain. Green is light. The key thing to watch for in an animated radar is how the precipitation is changing over time. Is it dissipating or getting stronger? This is the key to making a good decision about your plans. Going out into a storm as it is strengthening is a sure-fire way to get trapped by a flash flood or stranded in a snow storm.

The Highs and Lows of Pressure

Knowing how floods happen might keep you from losing property and possibly your life. Most people think that if they don’t live by a river or a creek, then flooding is not a risk for them. Actually, in urban environments, floods can affect you anywhere. Local Overland flooding is when water flows over land and enters your vehicle or home. In urban environments, like Houston, which has large expanses of parking lots and roads built on top of wetlands, you should expect overland flooding during any heavy rain event. In fact, roads in Houston and most cities are designed to handle rainfall rates of only around 1 to 2 inches per hour. At higher rates, the roads are designed to act as channels. In other words, they are designed to flood. This is why I bought a house in Houston that is several feet above the street level (and not in the 100-year flood zone).

With global warming in the news so much now, people are also talking about the weather more -- and spreading myths and misinformation. By learning these basic weather concepts, you can hopefully debunk the myths and talk intelligently about the weather. And maybe keep yourself safe. 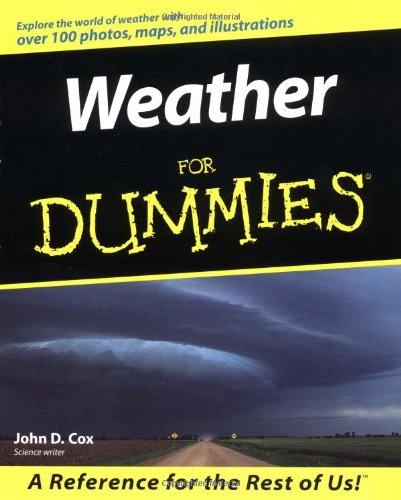 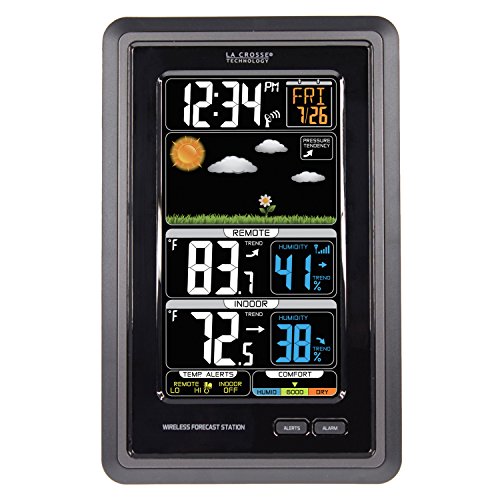 La Crosse Technology S88907 Vertical Wireless Color Forecast Station with Temperature Alerts Amazon Price: $59.99 $41.38 Buy Now(price as of Dec 21, 2015)
This is one of the best-rated weather stations that will show you the barometric pressure, temperature, and humidity.
Next >> Earthquake Prediction: Folklore and Science