How to Run a Better Meeting

Problem Meetings have been known as time wasters for a great long time. In fact, Henry Martyn Robert tried to establish good meeting practices when he published "Robert's Rules of Order" back in 1876. Despite this text being available for well over 100 years, meetings often still waste the participants' time. The book tries to maintain order which should improve the meeting. Unfortunately, many meetings do not adopt such rules since participants don't know about them, the meeting is more informal or many other reasons. In fact, however, you can hold a better business meeting by adopting a few good principles for all of your meetings. Even if you are not in a senior position in an organization, you will be able to incorporate your principles which will benefit your meetings and which may even be copied by more people in your organization. This will help to improve the productivity of all meetings.

A review of several recent meetings found that the majority were not ranked well by participants. Typical comments received were "meeting too long", "no point to the thing", "time was wasted", "a certain person used all of the available time" and others.  Many of these comments might not have applied if strict rules were observed for the meeting. A problem with such rules, however, is that once they are adopted, they must apply for the duration of the meeting or the project. As more complexity is encountered, more observance of the rules is necessary. Meetings can become overly procedural as a result. Another difficulty encountered when applying strict rules is that hardly anyone knows the rules in the required amount of detail.

Instead of applying a rigid set of rules, Roberts' or others, use a few informal principles to guide your meeting. First among these is an agenda. Always write an agenda for any meeting that you are holding. This is very important. An agenda allows participants to focus their attention on particular topics that will be discussed. A good agenda is produced in advance and is distributed in advance as well. Often a wider number of people receive the agenda than the number who attend. This allows the topics to be known to all people who might be interested. Those reading the agenda can determine whether everything pertains to them and it gives them specifics that they can investigate later, if they do not attend. Producing an agenda in advance is an easy way to instill a higher level of professionalism to a meeting.

Once the agenda is produced, stick to it. Don't allow the discussions to drift wildly away from the agenda. It should point out that there is an introduction, specific topics of discussion, a time for new additions to the agenda, a question time and a summary. If you see that attendees are digressing, remind them that the agenda should be followed and invite them to save their new items for later. Without such controls, meetings will often run over the allotted time.

Once there is an agenda established, minutes can be taken. These are descriptions of what happened when each topic was discussed. The minutes also include an attendance list. It is a good idea to designate a secretary, someone who will keep the minutes. This allows the  organizer to concentrate on running things. Afterwards, the secretary can either publish the meeting minutes or they can forward their notes to the organizer who would publish the minutes. It is useful to distribute minutes quite soon after the gathering. This allows the participants to read the minutes and correct any errors that may have been included. It is usually the decision of the organizer to distribute a revised copy of the minutes once errors have been eliminated. The standard, accepted practice, however, is to save the corrections until the next session when they would be discussed as a new topic at that time.

Organizers should also obtain status reports from attendees prior to the gathering time. This allows the group to focus on practical discussions rather than using time for introductions. There is no way to keep a discussion on topic if the first 25% is used by people explaining what they did and where they did it during the past month. All organizers who call for such introductions are being wasteful of their time and of yours. They should get status reports in advance and publish them with the agenda.

By following the practice of producing an agenda in advance, asking for an agenda for all discussions that you attend and publishing minutes soon after your gatherings, you will find that your time in groups will be improved. Most others will agree that the events are better as a result. When these are better, time wasted is reduced, productivity is increased and people will actually appreciate the importance of future events. There is no worse event than one that has no agenda, allows speakers to ramble from topic to topic and which runs past the allotted time. These bad habits are also followed by discussions with no published minutes. Productivity is adversely affected by these types of problems. By having an agenda and minutes, your events will be far more useful. You may even find that others will follow your example and start holding better events themselves. This will improve productivity as a whole and will reduce the amount of wasted time in your work and for those you attend. 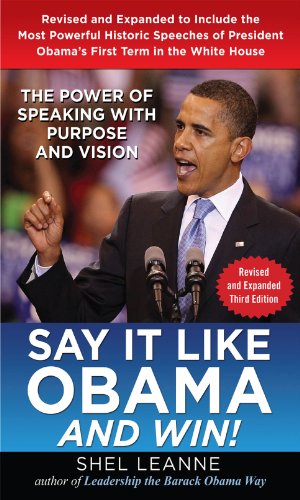 Say it Like Obama and Win!: The Power of Speaking with Purpose and Vision, Revised and Expanded Third Edition Amazon Price: Buy Now(price as of Sep 25, 2016)
Next >> How to Handle a Rude Coworker