Cat litter is probably about the least pleasant aspect of having a cat but if your cat is either an indoor cat or spends most of its time indoors, it is unavoidable. The only thing worse than the litter tray is when the cat stops using it and begins to use whatever is on hand to deposit their mess – a shoe, a box or the corner of the living room even!

In fact, cat litter avoidance, also known as inappropriate elimination, is the top behavioural reason why cats are given up to shelters or abandoned by their owners. It’s unpleasant and potentially dangerous if there are children in the house, but it can be remedied and often, the cause is something we humans have done.

The first thing to be sure about is that the reason for avoiding the cat litter box isn’t relating to a medical condition.  This could be anything from an older cat no longer able to climb into a high sided box to a problem with the bowels where they can’t hold it until they reach the tray.  It could also be they are experiencing discomfort when going to the toilet, which is making them avoid the litter tray.  In their minds, the litter tray is associated with pain so they avoid it to try to avoid the pain.  If there is any chance these could be the root cause of the problem, get in touch with your vet.

There are some people who have their pets declawed.  This article isn’t to debate the rights and wrongs of this move, as the decision is every cat owner’s to make.  However, if this procedure has been conducted on the cat, it may be that the cat litter makes their paws hurt and this could be why they are avoiding it.

Step two in solving the litter tray mystery is to assess the tray itself.  Is it clean enough for the cat to use?  When answering this question, remember that cats have a far more sensitive sense of smell than humans do so what we consider clean may be a bit filthy to their nose.  Some people consider having two litter trays so one can be undergoing intensive cleaning while the other is in use.

The other issue with the litter tray is the size and shape of it.  This is especially relevant if you have either just introduced a new litter tray or a new cat to the household.  Firstly, the type of tray can have a negative effect on some cats litter habits.  While a covered litter box sounds ideal to keep smells and mess out of the way, some cats find them intimidating and won’t use them.  Generally, an open cat litter box is the safest option because the cat doesn’t feel nervous entering it as if some predator was hidden inside, waiting to maul them.  Self-cleaning trays are another area that seem like a great idea but the motor can put some cats off.

The other side of this issue is if you have introduced another cat to the household.  While the two might be best friends or mutually ignoring each other, sharing a litter tray can be a step too far.  The best idea is to have one tray per cat and even put them in slightly different places so they can use the toilet in peace, particularly if the new arrival is a kitten!

Finally, make sure the litter tray is big enough for the cat.  Usually, around one and a half times their length is ideal so pick the box for the cat, not for the spot you want to put it in.

A product idea of an open cat litter tray 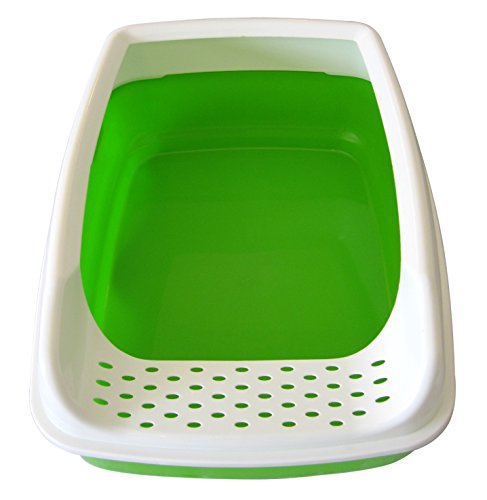 Litter box liners are another excellent idea that some cats can’t deal with.  They can easily tear with the cat’s claws when using the litter so pools of urine can form in the gaps creating a scent problem that humans may be unaware of.  The feel of the plastic when they are covering up their mess can also be off putting and stop them using the tray the next time around.

The litter and the amount in the tray are the other main factors.  Humans like different types of toilet roll; cats like different types of litter.  It can be worth trying them with something new but if they don’t like it, have a backup plan to avoid some nasty messes.  Also, make sure you use enough litter for them to dig a hole, deposit their mess and cover it up or this could aggravate them to the point of not using the tray.

Most cat owners don’t encounter problems of this nature for the entire life of their pet but if they do, remember one important thing – don’t punish the cat for the mess.  This makes the cat afraid of you and come to associate going to the tray as something he gets into trouble for.  These issues can make the situation much worse and never find the underlying cause of the problem.