Here's your invitation to the best end of the world party on the planet. Best of all, it's free.
InfoBarrel is a writing platform for non-fiction, reference-based, informative content. Opinions expressed by InfoBarrel writers are their own.
InfoBarrel > Lifestyle > Food & Drink

The Party to End All Parties A Lighter Look at the End of the World December 21, 2012

Many people believed that Dec 21, 2010 would signal the beginning of the end of the world (a

Many survivalists are stocked up on food, weapons, and fuel. Others grabbed a six pack of beer and an end of the world movie.

There is some good news! Now you've got (hopefully) plenty of time to build a great collection of doomsday moviews.

The nice thing is that you can throw social convention out the window.

It's important however that your invitation accurately reflects the tone of your party. If it is a tongue in cheek look at doomsday, you don't want to spend the evening with a new ager who will spend the entire night discussing, in great detail, why the prophecies of the Mayan calendar are bang on.

Similarly, you don't want to open the door to an hard core survivalist who's got a rambo knife stuffed in his belt, a fully loaded uzi in one hand and a half empty six pack in the other.

You do not have to invite anyone you don't like.

Some people may feel snubbed, but they will get over it, and everything else by midnight.

It's OK to invite your ex girlfriend, boyfriend, husband or wife. It's a great opportunity to reconcile or tell them how you really feel.

If you have secret crush on someone, be sure to invite them.

If they brush you off, it's probably going to feel like the end of the world anyway.

You could opt for a Mayan theme.  After all, the date for the end of the world is based on the Mayan calendar, but how many or your friends have a good selection of Mayan dress clothes in their wardrobe?

Your best bet is to ask people to come dressed as though this is their last night on Earth. Some may show up dressed to the nines. Others may arrive in full military gear.

A word of caution however. Some people may want to leave the world the same way they came into it. You should stipulate that going "au natural" is not an option, at least not early in the evening. 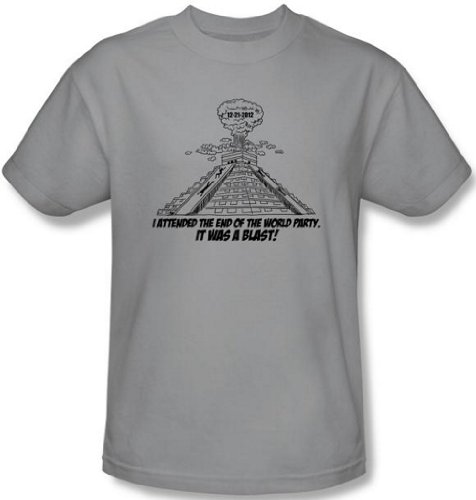 Think about this one carefully. You can go out all with a killer end of the world theme, but there may be a big price to pay.

You may have  to get up on December 22nd, hungover and face the thought of cleaning up, taking down the party decorations and then decorating for Christmas.

If your Christmas decoration are already up, simply embellish them with some doomsday accessories like black bows. You'll also find some great accessories in the Hallowe'en section of your local party store.

Who says red, green black and orange don't go together.

Get the Party Going

Get the early arrivals in the mood with a great "end of the world movie". There are some excellent ones to choose from.

Alien invasions are always popular, as are zombie movies and attacks by tomatoes and other forms of plant life.

Disaster movies are another great choice. You may prefer earthquakes, tsunamis, hurricanes or asteroids crashing into the earth.

Opt for pot luck and have everyone give their dish an appropriate end of the world name. Suggestions include veggies and doomsday dip, nuclear nachos, calamity clams, hazardous baked ham and tragic turkey casserole.

You'll want your drinks to also be appropriately themed. How about a tequila no more sunrise, doomsday daiquiri, won't see you again caesar, or a comet collision rum and coke?

Be creative. Have fun with it. Offer prizes for the guests with the best names for their food and drink recipes.

It's December 21st, 2012. Relax and have fun with your friends, because as Great Big Sea puts it "It's the end of the world as we know it, and I feel fine".