I've spent most of the past two decades in East Asia, holding lecturing and publishing positions in Hong Kong, Japan and South Korea. Among my favorite places are Taiwan and the Philippines. I'm fascinated by local religions and customs, and enjoy reading about history and how the English language changes and develops. I enjoy writing on InfoBarrel. If you love writing, sign up today.
InfoBarrel is a writing platform for non-fiction, reference-based, informative content. Opinions expressed by InfoBarrel writers are their own.
InfoBarrel > Business & Money > Marketing

How to Write the Perfect Press Release

Over the years I've written scores of press releases for the organizations that employed me, for external clients and my own projects. The effectives of a press release can be judged by how many column inches of print coverage it generates, how many blog posts it inspires - or even how much of it is regurgitated by lazy journalists! On that last score, I guess the most successful press release I've ever created was one describing a contest run by a local government department. It was picked up and printed in its entirety, without a single word being changed, as an article under a staff reporter's byline.

Press releases (sometimes called media advisories) are often sent out by mass emails. Instead of doing this, if possible send individual emails to named members of the media. After all, journalists liked to be remembered by the people they've met, and treated as valued contacts rather than elements of a mass audience.

Most press releases carry this statement just above the title: "For Immediate Release." In a few cases, the information in the release may be embargoed, which is to say it's being passed to the media on the understanding they won't release it publicly until a specified time/date. This happens sometimes when a company is about to announce a new product; they want newspapers etc to be ready to cover the launch in some depth, but don't want any leaks diminishing the splash they hope to make on launch day. Embargoes aren't legally enforceable; if a reporter breaks the embargo, all the company or organization behind the news release can do is exclude him/her from press conferences etc in the future.

The first paragraph should be short - three sentences is ideal - and state boldly why the media should pay attention to the press release. Has the company won an award? Is its new product rated as the best/the fastest/the most reliable by a trusted external assessor? Has an exceptional individual agreed to join the company's management? It's imperative you make your case in the first paragraph, as journalists receive lots of press releases each week and are likely to toss aside those which don't look promising. After drafting the first paragraph, read it through and ensure it answers these questions: What? When? Where? Who? Why? 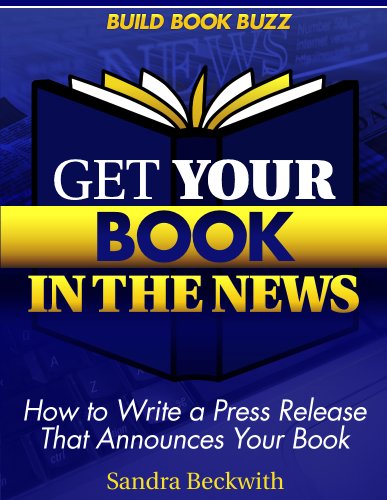 Get Your Book in the News: How to Write a Press Release That Announces Your Book Amazon Price: Buy Now(price as of Aug 27, 2014)

What do I mean by the tail of the press release? This is the boilerplate at the very end making life easy for journalists who wish to develop the release into a proper news story. Contact information is crucial. Give the name of an individual, along with his/her role in the company, who's positioned to answer media queries. Include an office telephone number, a cellphone number and an email address. Don't forget the company's website and, if relevant, Facebook page.

The core of the news release

The rest of the media advisory should flesh out the announcement with additional facts and figures. What kind of people are likely to benefit from this product? How many does the company expect to sell? How does the product differ from or improve upon already-available items? Use short sentences and short paragaphs for the sake of clarity.

Unless there's a great deal of information to convey, the release needn't run more than 300 words in length. One possible reason for going substantially over this wordcount is if you can include in-depth quotes from a senior figure in the company or organization, the CEO if possible. If the CEO or other senior figure is also willing to give one-on-one interviews relating to the announcement, make that clear in the final paragraph of the news release. In my experience, press releases which contain interesting quotes from topl-level managers are more likely to be seized upon by journalists than those which mention only a spokesperson, for the simple reason those quotes can be incorporated to quickly create a credible-looking article.

Remember: Be direct, be truthful and don't diss your competitors.

How Can I Affect Millions?