I Â joined Infobarrel as a way of earning extra income between jobs. It takes time to Â learn everything you need to know and build a portfolio but there is no better place to start. Everyone on Infobarrel is incredibly friendly and helpful and will help point you in the right direction.Â  The fun of Infobarrel is you can write about what you want to when you want to.Â If you'd like to make extra money or just enjoy seeing your name in print I'd recommend you toÂ sign up. I love writing for InfoBarrel and write on a variety of topics. You can see my recent articles hereÂ Â http://www.infobarrel.com/Users/andrewagreen
InfoBarrel is a writing platform for non-fiction, reference-based, informative content. Opinions expressed by InfoBarrel writers are their own.
InfoBarrel > Lifestyle > Dating & Relationships

How to live with a sports obsessed male

Is the man in your life obsessed by sport?

Are you a sporting widow?

The symptoms of sport addiction threatening your relationship

1. Finding time to do stuff

Firstly there is what you might call 'fixture congestion.' The sports mad man structures his life around the fixture list. Woe betide you if you don't understand this. Propose a social event, a week-end away or a duty visit to relatives and your sports obsessed man will instantly be on edge. His first instinct is not to think, 'Whoa that's a lovely idea', 'it will be great to get away for a few days' or 'yes it really is time we dropped in on Aunt Jemima'; he will go into an instant panic. The first questions that spring into his mind will be: 'Is there a game that week-end', are we at home, if not, will it be televised?' Unless you are a very tolerant woman or have learned to share his passion, or at least pretend to, this will become a source of tension between you.

You will feel like sport dominates every week-end making it impossible to make arrangements. Your sports obsessed man can not see this. The way he sees it the pretty place in the country is always there, there will be other days to see Aunt Jemima but the fixture list is just what it says, 'fixed'. It is not his fault the demands of TV play havoc with game times. He has to work his life around when games are and doesn't see why you can't too.

In your sports mad man's view of the world he could spend all week-end watching sport  if he wasn't so reasonable but as it is, out of consideration for you, there's just one game he has to see. You can try to reason with him but you need to understand that there is nothing reasonable about obsession. Your man is trying to compromise, within the bounds of his obsession, but there are things, despite himself he can't let go. He doesn't want to fall out over this stuff because, despite the way it may look, he loves you. You just have to understand the depth of the obsession and find ways to work round it.

Left to his own devices the sports mad male will spend his whole time watching sport but with a little love and understanding you will begin to understand what fixtures are really important to him and the ones he might be OK to miss. You'll hopefully be able to make some compromises like going to Aunt Jemima's the day the team aren't playing or the week-end they are away. Maybe there's a nice pub near Aunt Jemima's that will show the match and you wanted a heart to heart with her without him anyway...?

Maybe you can do stuff together on the morning of the game although, be warned, he will become more and more tense as the game gets nearer. You can help by re-assuring him you have half an eye on the time and that you will get him to the match.

Among the worst things you can say to a sports obsessed male is, "It's only a game."

The thing is that, in his rational self he knows it's only a game but that is entirely missing the point. The famous Liverpool soccer manager Bill Shankley once said about football,

"It's not a matter of life or death. It's more important than that."

This captures an important point about sport. Sports and games only matter if you want them to but if they don't matter there is no point to them. The whole point of sport is that you have to care about it. Take away the passion and it is a pointless activity. You have to care to get anything out of it.

The worst time of all to tell your man 'it is only a game' is when his team has just lost. He knows that the simple way to cheer up and get over his disappointment is to do just what you are suggesting; get a grip on reality and tell himself that it is after all, 'only a game.' But you have to care, because if you don't it's like saying it doesn't matter and if it doesn't matter you can'yt get any enjoyment out of it. Every sports fan knows that it's the disappointments that make the triumphs, even the minor ones, feel so good. How can you enjoy triumph if you have abandoned your team at their lowest point? How can you experience the joy if you have not felt the pain.

Sport for men is about passion. They are brought up to see emotion as something suspect, only for women. Sport is the one area of a man's life that allows him to be passionate and emotional. He may have to be the strong, silent, supportive type in every other area of his life but when it comes to his team the odd tear is permitted.  A quiet sober man is permitted a little dance of joy or to rant furiously at the officials over an outrageous injustice.

Your man lives all week for Saturday and the game. The fact is he is not wired for life in an office or on the shop floor. Men are built for the chase, for adrenalin pumping excitement and there just isn't enough of that in their lives. They know relationships are important but they need that excitement too. Sport gives them, the ups, the downs, the disappointments and the triumphs the drama and the excitement they crave and it does all that without anyone getting really hurt because men can't deal with real life excitement, the kind where people hurt each other; that's for women. Sport is the only kind of emotion men are allowed.

Women dress up and fuss about their clothes, men don't or at least that's the way it was with my generation. But sport gives men a license to dress up and go mad. The middle-aged man in the lurid football or rugby shirt is saying something important about his identity. A man's team is his tribe. Belonging to a tribe is important and the sports mad man wants everyone to know which tribe he belongs to. He'd be horrified at the idea of wearing make up but give him the chance to paint his face in the colours of the team and he'll be there.

We reserve the full regalia is reserved for match days but there are important gradations of clothing; from the subtle hints of a team logo or tie in team colours worn during the week, to casual wear, last season's shirt or a t shirt with team logos right up to match day. For match days, because; OK I confess it I'm a bit of an obsessive myself there is, depending on the weather, the t-shirts, match day shirt over the top, team fleece, choice of hats: silly ones, wooly ones or caps in team colours. And if any item of clothing goes missing it's disaster because ...................

You may, or may not know (if you want to live with this man I hope you do know) that your man's team lost an important game recently. There are those who think they played badly, others who blame the referee or the opposition but your man knows the truth. It was all down to him!! It is an infallible truth of fandom that the fan can influence his team. That you have to go to the game, if you possibly can, shout yourself hoarse, scream like a lunatic and make as much noise as possible is taken as read.

What is less known but every true sports obsessive knows is that the slightest betrayal of loyalty or even an innocent inadvertent change of habit can have a malign and unfortunate effect on the fate of your man's team. The important game could have been lost because variously: he failed to go to the game, listened to the commentary on the radio while wearing inappropriate clothing, said something unlucky that tempted fate or, as recently happened to me, bought a programme before the game. I shouldn't have done it. They ALWAYS lose when I buy a programme. It was a bad game to lose and I blame myself. 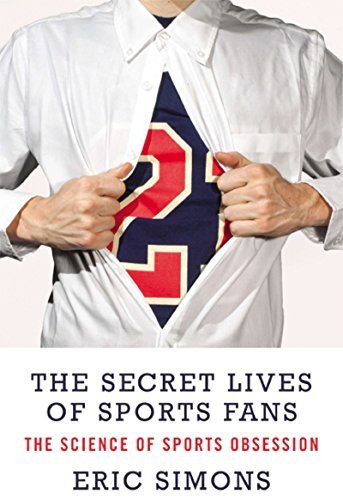