Whenever there is any discussion about British comedy, The office, Skins, The Peep Show, Fawlty Towers, Black Books, Father Ted are the only ones that usually come to mind. At least for a non Britisher, these are the shows I would be thinking of when I am talking about British comedy.

Then one fateful day I came across this gem of a show on TV. I was instantly hooked to it, I just couldn't stop laughing. I think IT Crowd is one of the most underrated sitcoms, and not just on British TV. It never got the attention it truly deserved, it was not even resolved properly when it ended. According to reports, IT Crowd will  return for a one-off finale episode. This is certainly great news!

In the IT Department of Reynholm Industries are two socially awkward guys Moss (Richard Ayoade) and Roy(Chris O'Dowd). Moss is an incredibly naive man, while Roy is a disgruntled employee . They get a new boss  Jen(Katherine Parkinson) who gets the IT department because of her wealth of experience in computers. Truth is she doesn't know anything about computers.

The show revolves around their antics in and out of their office. Since this is British, there are obviously criminally less no. of episodes, in this case six in each season. Since there were only 4 seasons, that takes the total to 24 episodes, the equivalent of an American season.

They makeup for the less no. of episodes by some absolutely fantastic comedy, and it retains its quality from start to finish.

It warrants an episode to episode detailing so here we go :

It all started here. When Jen interviews for a job in Reynholm Industries, she never imagines she would be placed in the IT department of all places. She lied in her résumé that she has an extensive experience with computers, but the truth is she doesn't even know basic things about computers.

Her truth is quickly found out by the guys, but Denholm Reynholm, their boss, makes a big deal about team work which forces them to not rat her out.

They find out that she has a big use for them since they are not people persons, and  she could help them in their social interaction. They decide to throw a party but Jen soon realises that being with them would probably mean that she would also not stay as popular as she was before.

The first episode was pretty good, it outlined the different qualities of the different characters in the show. Moss is overly naïve, and Roy is the more disgruntled one  who usually complains about people not treating the IT people well enough. Jen is the odd one among them, and every aspect of her character emphasized that. 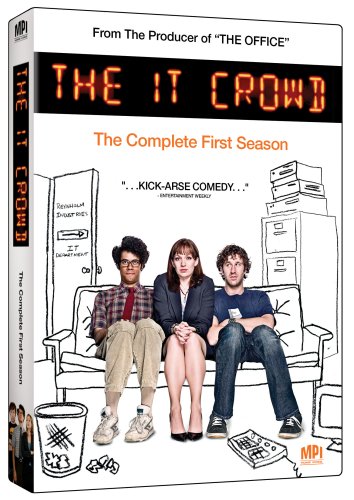 Possibly the funniest episode of the season, this was the episode that made me a fan of the show. Jen likes a pair of shoes which are 2 sizes smaller, which results in her feet being awkwardly twisted.

Denim meanwhile decides to declare a war on stress, and declares to fire anyone having stress. There is a whole stress class, and everyone  stresses about getting stressed.

Moss leaves the soldering iron on, which results in a fire breaking out. He dials the emergency number wrong as it is too long to remember, so he sends an email instead. He makes sure it is not too formal!

Roy gets dumped after a date, which makes him think that girls only like guys who act like bastards. He and Jen place a bet on him getting even a single reply to a profile of a bastard guy he sets up online.

Jen meanwhile gets asked out by a security guy Daniel while he is playing Who wants to be a millionaire. When he asks Jen a question, she gives the wrong answer which results in him loosing all the money. They still go out on a date in a restaurant recommended by Moss called Messy Joe's. Roy also comes there with the same girl he met online .

Daniell flips out at a restaurant clown, and in a fit of fury hits Roy as well.

I thought this was the weakest episode of the six episode series. Still funny, but I would not rank it among the best episodes of the show.

Roy and Moss warn Jen never to open a Red Door present in their office, as it will disturb the "rainforest ecosystem". When Roy gets stuck under a girl's desk, Moss goes to help him. Curiosity gets the better of Jen and she opens the door, only to find a goth named Richmond who was once very high up in the company.

He was once Denholm's second in command, but his Goth transformation didn't bode well with him and he got sent down as a part of his punishment.

She tries to help Richmond but fails to convince Denholm. As Richmond begins to bring everybody down, she soon understands Roy was right. A tiny disturbance to the ecosystem could change everything.

Very good episode, and the new character Richmond is very funny as well. His tilting of the neck and looking far away to symbolize flashbacks is hilarious! 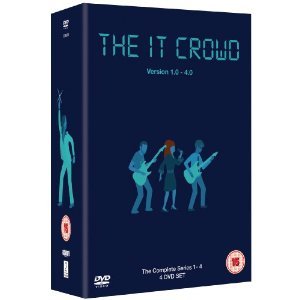 5.The Haunting of Bill Crouse

When Jen has a date with a co-worker, it doesn't go that well. When she tells Moss to lie to him, Moss gets worked up and tells him that Jen is actually dead.

Moss tells Jen that she is actually getting all the complimentary cards because she is the employee of the month. Meanwhile the co-worker spreads rumours that she slept with him, and when he sees Jen alive he thinks he thinks Jen's ghost is haunting him.

Jen is a little difficult around the office, because her "Aunt Irma" is visiting. When High Tide, closed for maintenance and that time of the month aren't able to make Moss understand, Roy  has to mention first scene in Carrie.

The guys think that they are having it too, when they become extra emotional and hormonal, and according to Roy, when they feel delicate.

Moss sends an email about their situation which leads to their mockery on the web world at first and culminates to major outbreaks around the world, with many IT guys' Aunt Irma visiting them!

Overall Season 1 was very good, and every second of it was excellent TV. The show had no weak links and all the actors involved in it seemed to enjoy their roles. Richard Ayoade as Moss deserves a special mention, partly due to his extra ordinary hairstyle!

Definitely a must watch, the only thing you will be angry about is the disappointing no. of episodes.