Ready to start listening to books?  The 5 Best Business Books on Audible is a great follow up.
InfoBarrel is a writing platform for non-fiction, reference-based, informative content. Opinions expressed by InfoBarrel writers are their own.
InfoBarrel > Sports > Mixed Martial Arts

I'm having that conversation again.  It's the one that always has that one line in it:  "I'm super excited to get started training!  I just need to get into shape first."  My "Homer Simpson forehead slap" is inevitably impending, but somehow I manage to keep it together for long enough to start into my long winded explanation.  It could be summed up in three main concepts, though, and I decided it might be a good idea to write them down so that I could share them with everyone.  In my perfect fantasy world, these words go viral and everyone on the planet who is considering training jiu jitsu ends up seeing this, and I don't ever have to explain this again, but in the real world, I'm probably just going to end up sharing this with some folks.  If you're one of those people, I really want you to be able to train Brazilian Jiu Jitsu, whether it's with us at my gym or not, and I would like for you to keep an open mind as you read through this.
No, you don't.
That's right- you don't need to get into shape in order to start training Brazilian Jiu Jitsu.  I'm going to outline the three reasons why you don't need to, too.  Again, please keep an open mind, as there are a lot of pervasive misconceptions about BJJ training.  Let's get started.

The image is of the technique portion of class, a slow, measured way to get better at the BJJ techniques taught.

Reason #1: Jiu Jitsu is a complete fitness program in and of itself

You read that right:  jiu jitsu is a fitness program as well as a martial arts system.   This means that you're going to get into shape as you go!  At our gym (as with many other gyms), the level 1 classes (beginner classes) start with a warm up that everyone can make it through at their own pace.  You'll be encouraged to work out, but you won't be forced to do anything you don't feel comfortable doing.
Our level 1 classes consist of very gradually letting you do some live rolling as well, but only with more experienced students. This means that you won't need to be in amazing shape at first.  Don't get me wrong, you'll be absurdly tired at the end of your first class, but it won't be any more than you can do, and after a couple of weeks, this workout won't seem like anything at all.  Your endurance will gradually build up over time, especially as you start "rolling" (live sparring in BJJ) more and more.

Reason #2: We're not going to throw you to the wolves on your first day

The aforementioned skill levels most gyms offer are  designed precisely because of something we (the owners) saw when we first started training jiu jitsu nearly 20 years ago.  We saw beginners, ourselves included, joining a gym and being essentially roughed up and attacked during their first class, and this extended on into the first few months of our BJJ journeys.  The end result was that we were really, really tough, and we could take a lot of pressure -- those of us who stuck around, anyway.As a result, this mentality pervaded for some time, and we became the wolves, eager for new sheep to be thrown in so that we could weed out the weak and make the survivors that much stronger.  I was fortunate to be in good enough shape and mentally tough enough to make it through this initiation, but over the years, I've adopted a much more modern perspective -- and I say "modern" here because I believe most gyms have also adopted this perspective, but it sure wasn't around when I was coming up.

Essentially, the new rule of the day is:  no throwing beginners to the wolves.  The idea is that toughness blossoms over time, and just because someone isn't super tough on their first day does not mean that they won't be a tough SOB two or three years down the line.  Many of our best students now have gone through this coddling process and have become not only extremely technical practitioners, but also extremely mat-tough.  The system works.

Jiu jitsu is more fun than every other workout

I've talked with a lot of grapplers over the years who will be sucking wind after rolling for 5, 10, or even 30 minutes.  I'm never not disappointed to hear them apologize for sucking wind and then say, "Man, I really need to get into shape!"  The answer is, no, you really don't.  You need to learn how to train.
Well, yes.  You do need to get into shape but that is, of course, going to happen over the course of time.  But learning to pace yourself is a huge part of the art, and that is one of the amazing things that separates jiu jitsu from all other martial arts:  you're going to be resting for a large percentage of the time.  Sure, you can kick back and wait for your moments in boxing, but you're also going to constantly be running around the ring, trying not to get hit, keeping you hands up, and so on.

All white belts are terrible

Everybody sucks at first.  You may as well go ahead and get that out of the way.   No amount of preparation, or putting it off, is going to make you better at BJJ, at least not to the same degree and with the same rapidity as stepping on the mat, sucking it up, and training!  Get started training right now, and don't put it off any longer.  It's going to be a lifelong journey, and the one regret I hear most from my friends who have been training for years and years is that they wish they had started sooner.  Start your own journey today! 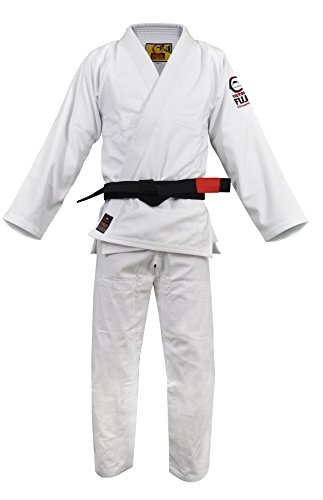