Behance for previous works ^^, Infobarrel for more articles ^^, Writing is a common way of expressing ones' self; and that’s why I love staying on this blank page, widening my “Imagineering skills”, and then…. Okay, let’s just start writing! If architecture is the art of wasting space (Philip Johnson), then writing is another artistic way of wasting a blank page. Enjoy reading? visit my contents that might interest you. :) share your thoughts and ideas in infobarrel too! sign up here
InfoBarrel is a writing platform for non-fiction, reference-based, informative content. Opinions expressed by InfoBarrel writers are their own.
InfoBarrel > Entertainment > Film > Television

"I promise to ride you as much as I ride my Harley"; When a biker's caught between his two favorites

SOA: The motorcycle club that will excite you 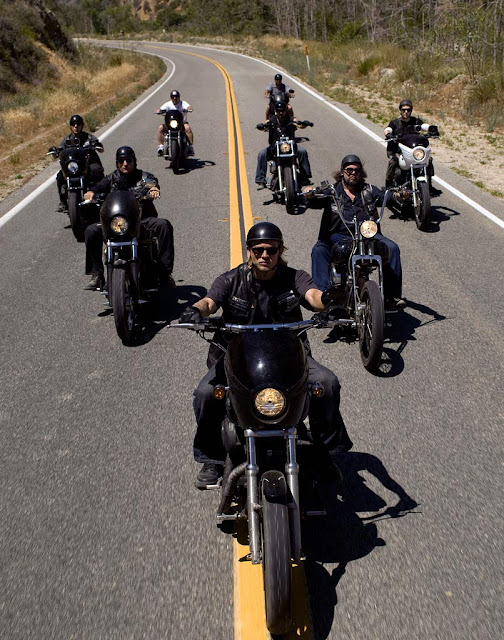 Who wouldn’t get caught up with these bad-ass looking guys riding their big bikes?

I started to get hooked up with this TV series in the mid-summer of 2012. Yes I know I’m kinda late since it was aired earlier before I discovered it. I won’t really find it without the help of a friend; he too is addicted to it. Well, all of us in the group really love the series. I started watching the first episode then get interested on the next until I finished all four season since season five is just coming out this September. I’m not sure if you guys know what I’m talking about, but to give you a hint of how cool this TV series is, here it goes!

Jax, (Jackson Teller) certainly the front man (as what we call a vocalist in a band who represents his band) is the main character of this series. The story goes around his life from the past and of course the future. He’s a member of a motorcycle club which is once led by his deceased father John Teller; the best buddy of the present president of the SAMCRO or Sam Crow Clay morrow. Ironically, Morrow stands not only as the present president of the group but also the man whom his mother, Gemma Teller remarried after his father’s death. The activities centered in the teller-morrow shop where the group works as car mechanics and technicians aside from their club duties. Repairing automotive isn’t really a big thing to support them and their families so they do another job to support the club’s expenses and their families. They buy and sell guns specifically AK’s from the other groups who needs it for some action. With this, they get to earn enough for themselves and help charming stay in peace. One day, Jax just discovered a book written by his father. JT’s wisdom slowly gets into Jax’s perspective and made him think about what he really wants to do with the club before he gets murdered by his own wife Gemma, and his best friend Clay. Mysteries continuously showed up making Jax doubt his own club, his own identity.

Jackson "Jax" Teller- The vice-president of the club; only son of John and Gemma. He has a son named Abel with a girl who doesn't know how to take care of herself. His love interest is Tara Knowles; the girl he loves since 16.

Gemma Teller- Mother of jax who remarried to Clay Morrow. Gemma stands as the mother of the club. She's willing to sacrifice her own life because of her love for the club.

Clay Morrow- President of the club who has something to do with J T's death. As the president of the club, he insures the town of Charming away from chaos. However, because of greed, he ended up leading his own club to drug dealing.

John Teller- Founder of SAMCRO and the first president of the club. His marriage with Gemma Teller gave them two sons, Jax and tommy; however, tommy died in the age of 6. Before he died, he wrote and left a manuscript for the club entitled "The life and death of SAMCRO: How the sons of Anarchy lost their way" which is discovered later by his son.

Piermont "Piney" Winston- One of the first 9 of the club. He co-founded SAMCRO with J T after returning from the Vietnam war. Because of emphysema, Piney's club life has lesser actions compared to the younger members. He's the one who always brings an oxygen with him and still wears the old original kutt of the club. His and Clay's belief are opposite because he's more of a J T's loyalist.

Robert "Bobby Elvis" Munson- Bobby is the secretary of the club. Among the members, he's the most even-tempered.

Alexander "Tig" Trager- Tig is the sergeant-at-arms of the club; matching his personality of being violent. With the Clay-Jax sides, he is extremely loyal to Clay.

Filip "Chibs" Telford- Another sergeant-at-arms of the club. He seems to developed closeness with Tig but their side of loyalty differs. As a father being away from his daughter, he uses his father-like figure with Juice.

Juan Carlos "Juice" Ortiz- Juice is the intelligence officer of the club. Like Jax Teller, he also wears the patch "Men of Mayhem" that he actually doesn't deserve.

Harry "Opie" Winston- The son of piney and Jax's best friend. Opie unlike the others, is a father and husband to his wife Dona and stays with them. Receiving too much pressure from his wife, he tought of quitting the club to live peacefully with his own family.

"Big Otto" Delaney- Otto is another member of the club but is imprisoned because of murder and theft. Still in prison, Otto still communicates with the club.

Kip "Half Sack" Epps- Prospect as they call him is yes, a prospective member of the club. He does all the cooking, painting, repairing, and all the undesirable tasks.

Chief Wayne Unser- Standing chief of police in the town of Charming. He actually don't want any mess happening in the town, thus negotiating with the club. He's like the club's protection inside the government.

Tara Knowles- Tara is the love interest of Jax Teller, like what I've said awhile back, he loves her since they were 16. Being Jax's girlfriend, she gets to be called his old lady.

Wendy Case- Wendy is the biological mother of Abel, Jax's son. She's really a drug addict who uses her pregnancy to stay with Jax's side. But during her pregnancy with Abel, she didn't get to control herself in using drugs, making Jax leave her.

There are a lot more interesting characters you're going to meet when you start watching the series. They will all surely make you happy, sad, envious, etc. because the story spins around friendship, loyalty, hatred, pride, wisdom and love. See them laugh, cry, and get mad with the twists of life. Season five is fast approaching keep an eye on it on September 11, 2012.